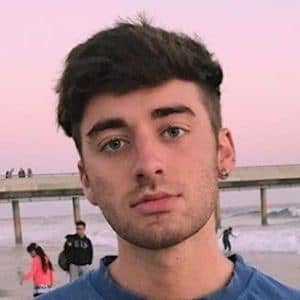 Carmie Sellitto is a social media personality and YouTuber from Britain. The content creator is mostly famous for his “touchdalight” and “TouchdalightVlogs” YouTube channel. His main account features sarcastic and random videos while his second channel features general vlogs.

How old is Carmie Sellitto?

Carmie Sellitto was born on September 23, 1998, in Hampshire, England. He is British by nationality and is currently 22 years old. Talking about his family, Carmie has not revealed information regarding his parents and other family details. However, he mentions growing up with his two sisters. Besides his content creation, he loves listening to music by Drake, Tayyib Ali, Skepta, and Kyle.

Academically, Carmie graduated from a local college but details regarding his educational background and institution are not available a present. As of now, Carmie resides in London.

How is the professional life of Carmie?

Carmie Sellito is a social media personality by personality and is popular online with the name “touchdalight”. Carmie delivers sarcastic and random videos for his subscribers’ enjoyment. He launched his main Youtube channel on the 29th of January, 2012. It was only three days later, Carmie published his first video titled, “Don’t Watch This”. To date, he has posted over 70 videos on his channel.

Some of his most viewed and liked videos are ‘Guess her age challenge’, ‘I Got Roasted by an ASMR YouTuber’ and ‘I got my first tattoo and I hate it‘. The first video was a challenge-based video, whereas the other two videos depict interesting experiences that happened to Sellitto.

It was the date November 2017, he joined the web group called “The Social Climbers”. And as of now, his YouTube channel has amassed more than 688K subscribers. Moreover, Carmie even mentioned YouTubers like Jana Vlogs and Joe Sugg as some of his favorites.

How tall is Carmie?

Physically speaking, Carmie Sellito stands with a height of 5 feet 11 inches and weighs about 72 kilograms. Looking at his social media posts, he seems to have maintained a pretty fit body and mentions wearing a shoe size of 9 (UK). Furthermore, he has dark brown hair and a pair of blue eyes.

Is Carmie Sellito in a relationship?

Referring to the dating life of Carmie, he is currently dating fellow YouTuber, Kate Elisabeth. The couple started seeing each other in August 2018 and even recently celebrated their 2nd Anniversary. They both appear on each other’s channels occasionally and even feature each other on their respective Instagram posts often. During the past, Carmie might have dated a few girls and he has even shared plenty of videos on his main channel where he has discussed his past relationships, crushes, etc.

Talking about his rumors and controversies, back in 2018, he received a lot of hate for allegedly posting child pornography in a public forum. According to several reports, people even reported this incident to the police and they came to his house to investigate the incident. Later he apologized and admitted that he was just trying to make a few clickbait videos to gain popularity.

What are Carmie Sellito’s net worth and salary?

As a celebrated YouTuber and social media personality, his channel currently has over millions of views and subscribers. Thus, with such fandom and social media engagements, Carmie Sellito has a net worth estimation of approximately US $200,000. However, he has not disclosed details about his official earnings.

Carmie Sellitto is quite popular on social media platforms like Instagram, Twitter, and YouTube. He goes by the username @touchdalight on Instagram and is also a verified user. His profile is able to garner more than 220K followers. Similarly, he has 133.4K followers on Twitter, his main channel has about 688K subscribers whereas his secondary channel has about 102K subscribers.

Our contents are created by fans, if you have any problems of Carmie Sellitto Net Worth, Salary, Relationship Status, Married Date, Age, Height, Ethnicity, Nationality, Weight, mail us at [email protected]