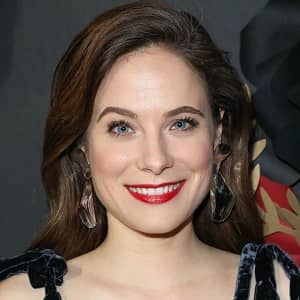 Caroline Dhavernas is a Canadian actress famous for her works with Bryan Fuller in ‘Wonderfalls’, and ‘Hannibal’. Some of her other popular works include the portrayal of Lily Brenner in ‘Off the Map’ and Mary in ‘Mary Kills People’.

How old is Caroline Dhavernas?

Caroline Dhavernas was born in Montreal, Quebec, on  May 15, 1978. As of 2020, her age is 42. She was born to parents Sébastien Dhavernas (father) and Michèle Deslauriers (mother). Both of her parents are prominent Quebecois actors. Moreover, her sister Gabrielle Dhavernas is a popular voice actress. The two sisters have a very similar voice and Gabrielle can also dub the voice of Caroline.

She spent her childhood days in Montreal and her ethnicity is French Canadian.

After making her acting debut in 1990 as a child actor in the movie, ‘Comme un Voleur’, she appeared in her first feature film, ‘Thick as Thieves’ in 1999. The same year, she also appeared in L’île de sable.

In 2003, she co-starred in Peter Greenaway’s ‘The Tulse Luper Suitcases, Part 1: The Moab Story’, which was presented at the Cannes Film Festival of the same year.

In 2002, Caroline Dhavernas made her American TV debut with ‘Law & Order’. However, the one she did after that, the comedy, ‘Wonderfalls’ in 2004 was the one that really introduced her to American TV audiences.

In 2005, she starred in a supporting role in ‘Niagara Motel’. A year later, she starred in the Focus Features film, ‘Hollywoodland’ with Adrien Brody which would be the first of two collaborations with the actor with whom she also starred in Wrecked (2010).

In 2008, she made an appearance in the critically acclaimed Canadian feature film, ‘Passchendaele’ which was the winner of the 2009 Genie Award for “Best Motion Picture”.

In 2013, she starred in NBC’s psychological horror thriller, ‘Hannibal’. Her performance as Dr. Alana Bloom earned her nominations for an ACTRA Montreal Award nod for “Outstanding Female Performance”, a Saturn Award nod for “Best Supporting Actress on Television”, a Golden Maple Award for “Best Actress in a TV Series Broadcasted in the US” and a Chainsaw Award for “Best TV Actress”.

In 2017, she starred in the Canadian black comedy-drama, ‘Mary Kills People’ as the titular character in two seasons. it concluded in 2019.

What is the Net Worth of Caroline Dhavernas?

Caroline Dhavernas has an estimated net worth of over $2 million as of 2020. Her career as an actress has been that of a successful one as she has starred in a number of hits TV shows and movies.

Who is Caroline Dhavernas dating?

Dhavernas is currently in a serious relationship. She has been dating the Quebecois actor Maxime Le Flaguais since 2016.

Dhavernas kept this relationship away from the public eye until October 2016, when she shared the news of their relationship by attending the Montreal Canadiens game at the Bell Center together.

In 2018, she gave birth to their daughter, Françoise.

How tall is Dhavernas?

Caroline stands at a height of 5 feet 5 inches and weighs around 52 kg. She has maintained an attractive body figure with the measurements, 34-24-35 inches for breasts, waist, and hips. Her hair color is brown and her eyes are blue in color.

Our contents are created by fans, if you have any problems of Caroline Dhavernas Net Worth, Salary, Relationship Status, Married Date, Age, Height, Ethnicity, Nationality, Weight, mail us at [email protected]