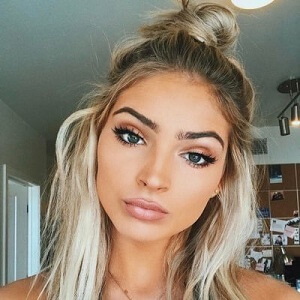 Carrington Durham is a famous social media celebrity who is well-known for her modeling and acting career. Moreover, she is also known for her appearances on the series Teens Wanna Know and as a member of CloutGang.

Carrington also uses social media to promote various brands and products that she endorses. Despite already being established as an actress in the industry, she continues to take acting classes and keep improving her skills.

How old is Carrington Durham?

Carrington Durham was born on September 6, 1998, in Nashville, Tennessee, USA. She is currently 22 years old. Talking about her family, she has a younger sister, Isabella, who is also an Instagram personality and has acted in the web series, Chicken Girls.

The sisters moved with their mom from Tennessee to Southern California. And about her father, he is an entrepreneur. During childhood, she was fond of acting and gotten herself to be part of many acts. She even used to be a part of cheerleading until the age of eight. Carrington finished her Primary education and higher secondary education from Tennessee after which she started a career in modeling.

How did Carrington Durham pursue her career?

In the early days, she took part in various forms of acts which helped her get featured in many commercials. She soon got a huge positive response from the industry and soon she became a part of various TV shows like “Teens wanna know”, “Hole in the wall”, and “10 seconds.”

After she got recognized in the TV shows, she started getting offered for many advertisements for “Sony Pictures”, “Boohoo”, and various other brands. She was initially stared in “The Muppets Movie” which made her even a greater sensation in the world of entertainment. She even has started her self-entitled YouTube channel named “Carringtonofficial”, where she uploads videos regarding makeup tutorial, workouts, and hair tutorial.

What is Carrington Durham’s net worth?

Being a successful social media personality and actress, her estimated net worth is set to be around $550 thousand and salary is about $15 k to $20 k per movie/episode.

How tall is Carrington Durham?

Talking about Durham’s personal love life, the model has dated Jai Waetford who was a participant of’ ‘X Factor Australia’. The couple had started seeing each other in 2015 but sadly in 2017, they got separated.
Currently, she’s in a relationship with fellow social media star FaZe Blaziken.

Our contents are created by fans, if you have any problems of Carrington Durham Net Worth, Salary, Relationship Status, Married Date, Age, Height, Ethnicity, Nationality, Weight, mail us at [email protected]