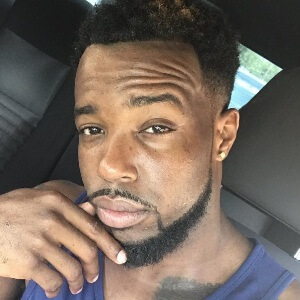 Cash Nasty is an American YouTube star and social media personality. He came into the limelight after his ragging videos and other funny videos went viral on the YouTube platform. He is loved by the audience for his personality and ability to make his viewers laugh.

When was Cash Nasty born?

Cash Nasty was born on December 4, 1990, in Vidalia, Louisiana. As of 2020, his age is 29. The star holds an American nationality and is from Afro-American ethnicity. Details regarding his family are still hidden from the media but he has mentioned having a brother whose identity is unknown.

Academically, Cash decided not to pursue a college degree but to rather make a career online. Before the fame, he worked at Wal-Mart as an assistant manager, until he started earning enough money online.

Cash is a big fan of basketball and loves watching as well as playing it. He’s a huge LeBron James fan.

Talking about the star’s career, he started his YouTube career earlier in 2013 with the channel name ‘WhatChaMacalling‘. He started by uploading several hilarious and ragging videos and soon earned over 2 million subscribers in a matter of days.

He has even featured many of his fans in his videos and he even has webcast the videos live to the viewers. Along with the funny and sarcastic videos, he even plays games like NBA-2K and other games on his YouTube channel. His viewers have followed him to other social media platforms such as Instagram and Twitter.

Cash even started a joint YouTube Channel with his girlfriend Ash called ‘CashNAshVlogs’.

Who is Cash Nasty dating?

Currently, Cash Nasty is in a loving relationship with his girlfriend Ashley who is YouTuber as well. The two started dating since the year 2007 and seen together happy ever since. They even have created a joint YouTube channel and the two are seen enjoying their life happily.

Cash has even featured his girlfriend on most of his videos. As of the current generation, lots of YouTubers are dating other YouTubers. It is a very specific way of living and it is not easy to get along with a person who does not understand what it’s like to have a career on YouTube.

What is the net worth of Cash Nasty?

As of the year 2020, Cash has established himself as a successful YouTuber. As a YouTuber, he is seen living a luxurious lifestyle from the money he earned from his career. It is clear that he makes a decent number out of his YouTube channel. As per sources from online sites, he has an estimated net worth of about $500 thousand. However, he has hidden his official earnings from the media.

How tall is Cash Nasty?

Cash Nasty stands tall at a decent height of 5 feet 11 inches and he weighs about 75 kilograms. His further body measurements are under review. However, he has a set of dark brown eyes and his hair color is black.

What makes Cash so special is the way he engages with his audiences. He actively responds to the wishes of his fans and takes appropriate comments from them. His darling personality has earned him about 3.72 million subscribers on YouTube. Similarly, he has a great fan following on Instagram as well with a million followers and the same goes for his Twitter profile.

Our contents are created by fans, if you have any problems of Cash Nasty Net Worth, Salary, Relationship Status, Married Date, Age, Height, Ethnicity, Nationality, Weight, mail us at [email protected]