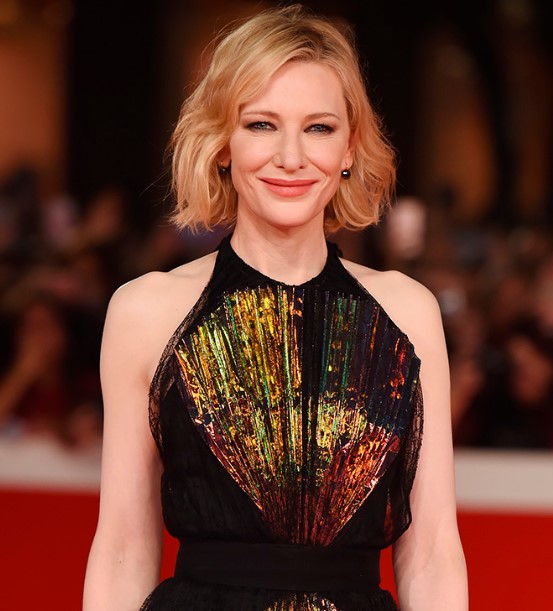 Cate Blanchett is an Australian actress and theatre director who is the recipient of two Academy Awards, three Golden Globe Awards, and three British Academy Film Awards. In 2007, she was listed as one of the 100 most influential people in the world and was ranked among the highest-paid actresses in the world in 2018.

Cate even won the Oscar Award for Best Actress for her performance in “Blue Jasmine” in 2014 making her the first Australian to win more than one acting Oscar. She is also known for her appearance in “Lord of the Rings” and “Thor: Ragnarok”.

What is Cate Blanchett Famous for?

Where was Cate Blanchett Born?

Cate Blanchett was born on May 14, 1969, in Ivanhoe, Victoria, Australia. Her birth name is Catherine Elise Blanchett. Her nationality is Australian. Cate mixed to White ethnicity while Taurus is her zodiac sign.

Cate was born in a well-to-do family to Robert DeWitt Blanchett, Jr.(father) and June (mother). Her mother worked as a teacher and property developer while her father served in the United States Navy and later became an advertising executive.

She grew up along with her younger sister, Genevieve who is a theatrical designer and an older brother, Bob who is a computer systems engineer. Her father, however, died of a heart attack when she was just 10.

Blanchett attended Ivanhoe East Primary School and then Ivanhoe Girls’ Grammar School. She then joined Methodist Ladies’ College and later attended the University of Melbourne for a year before dropping out. During her late teens and early twenties, Blanchett also worked at a nursing home.

Later, she enrolled at the National Institute of Dramatic Art and graduated from there in 1992, receiving her Bachelor of Fine Arts degree.

Who is Cate Blanchett Married to?

Cate Blanchett is married to her husband, Andrew Upton. Upton is a popular playwright and screenwriter with whom Cate met for the first time in 1996 on the set of a TV show. They even worked on the play, “The Seagull”.

Later, on December 29, 1997, the couple got married and have four children: three sons, Dashiell John Upton (born 2001), Roman Robert Upton (born 2004), Ignatius Martin Upton (born 2008), and an adopted daughter Edith Vivian Patricia Upton. Blanchett said that she and her husband had been wanting to adopt ever since the birth of their first child.

In 2008, Blanchett and her husband became co-CEOs and artistic directors of the Sydney Theatre Company (STC).

What is the Net Worth of Cate Blanchett?

The 50 years old Cate Blanchett has quite a great earnings from her professional career as an actress. Working in this field for more than 3 decades, she has easily managed to amass a million worth fortune from her several blockbuster movies.

Her estimated net worth is around $95 million while her salary per movie is around $12 million.

In 2018, with her fortune $125 million, Cate was ranked eighth among the highest-paid actresses in the world. Having appeared in over 70 films and over 20 theatre productions, Blanchett’s films have grossed over $9.8 billion at the worldwide box-office.

Blanchett became a brand ambassador for Giorgio Armani fragrances for women during 2013 for which she was paid $10 million.

How Tall is Cate Blanchett?

Cate Blanchett is a gorgeous lady in her 50s. She has undoubtedly a well maintained stunning slim body physique of measurement 34-24-35 inches. She stands tall with a height of 5ft. 8inch.(1.74m) while her body weighs around 55kg(121 lbs). She has a fair complexion with blonde hair and blue eyes.

Our contents are created by fans, if you have any problems of Cate Blanchett Net Worth, Salary, Relationship Status, Married Date, Age, Height, Ethnicity, Nationality, Weight, mail us at [email protected]