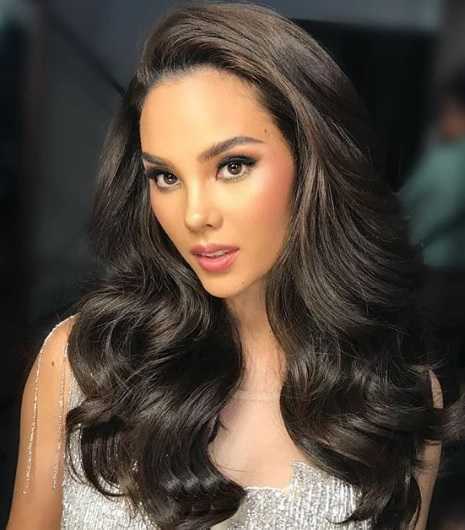 Catriona Gray became the fourth Filipina to win the Miss Universe beauty pageant title, as she won the 2018 Miss Universe held at Bangkok, Thailand on 17 December 2018. The other three were Gloria Diaz in 1969, Margie Moran in 1973, and Pia Wurtzbach in 2015. Miss Universe 2017, Demi-Leigh Nel-Peters of South Africa crowned Catriona as a new Miss Universe 2018. In the final round, she was asked, “What is the most important lesson you’ve learned and how will you apply it to your time as Miss Universe?” She answered:

“I work a lot in the slums of Tondo, Manila and the life there is poor and very sad. And I’ve always taught myself to look for the beauty of it and look in the beauty of the faces of the children and to be grateful. And I will bring this aspect as a Miss Universe to see situations with a silver lining and to assess where I could give something, where I could provide something like a spokesperson. And this I think if I can teach people to be grateful, we can have an amazing world where negativity could not grow and foster and children will have a smile on their faces.”

The 2018 Miss Universe Philippines, Catriona Gray has released the music video for the song “We’re in this Together” on Sunday, 25 November 2018. It is a social song about helping the children in need. Marcus Davis wrote the song and Young Focus International produced it. Gray is working with Young Focus International from the beginning of her career. The organizations help the children and poor communities in Tondo, a district in Manila, Philippines.

The full name of Gray is Catriona Elisa Magnayon Gray. She was born on 6 January 1994. Her birthplace is Cairns, Queensland in Australia. She was born to a Scottish-born Australian father, Ian Gray, and Filipino mother, Normita Ragas Magnayon. Thus, she holds both Filipino and Australian nationality. Her birth sign is Capricorn. Gray grew up in Cairns, where she attended Trinity Anglican School. She then attended Berklee College of Music, where she obtained her Certificate in Music Theory. She was also a martial arts player. She earned a black belt in Choi Kwang-Do. She obtained Certificate in Outdoor Recreation. She was fond of singing and was the lead singer of her school’s jazz band.

After completing high school, Gray moved to Manila, Philippines. She started her modeling career there.

She was listed as one of Cosmo Magazine’s top Models in the Philippines at the age of 18.

Gray went on to participate in Miss World 2016 in the United States. She made it to the final Top 5 in the competition. She succeeded in winning Multimedia Award and finished second in the talent round of the beauty pageant competition.

Gray participated in Binibining Pilipinas pageant in 2018, where she was crowned as the 2018 Miss Universe Philippines.

Gray is the fourth Filipina after to win Miss Universe beauty pageant title. The other three were Gloria Diaz in 1969, Margie Moran in 1973, and Pia Wurtzbach in 2015.

Currently, Catriona Gray is in a romantic relationship with Clint Bondad. He is Filipino-German and is also a model. They two met on a modeling project. She has several hobbies like painting, sketching, singing, writing, cooking, and photography. She is also interested in sports. She can play the guitar very well.

Net Worth of Catriona Gray

The net worth of beauty pageant titleholder is under review. She acquires a handsome income through her tv gigs, modeling projects, as well as from music career. However, there is no information regarding her annual incomes on the news sites. It is difficult to evaluate her net worth at present. It will be updated soon after we acquire the necessary information.

Our contents are created by fans, if you have any problems of Catriona Gray Net Worth, Salary, Relationship Status, Married Date, Age, Height, Ethnicity, Nationality, Weight, mail us at [email protected]