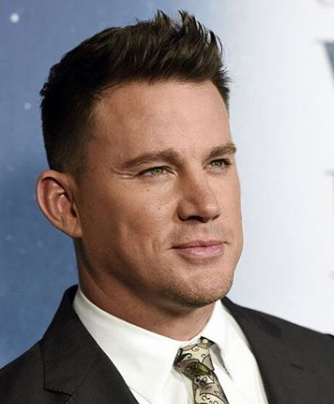 The well-known American actor is Channing Matthew Tatum. He is professionally known as Channing Tatum. He was picked as one of Tear Sheet magazine’s “50 Most Beautiful Faces” of October 2001. In November 2012 he was named ‘People magazine’s annual Sexiest Man Alive’.

He started two production companies named ‘33andOut Productions’ and ‘Iron Horse Entertainment’. He is also a strong supporter of ‘DaisyCares.com’ which is a charity for domestic animals,

Where was Channing Tatum raised?

Channing Tatum full name is Channing Matthew Tatum. He was born on 26 April 1980 at Cullman, Alabama, U.S. He was born to Kay Tatum who is an airline worker, and Glenn Tatum who worked in construction. He has a sister named Paige. He is mostly of English ancestry. His horoscope is Taurus. While growing up, he played football, soccer, track, baseball, and performed martial arts. He also practiced wuzuquan kung fu. He attended Gaither High School. In 1998, he graduated from Tampa Catholic High School. Later he attended Glenville State College.

Tatum left the job of a roofer and began working as a stripper at a local nightclub. He later moved to Miami where he was discovered as a model by the model talent scout.

Tatum’s height is 1.85 m and weight is 89 kg. His eye color is green and hair color is brown. Overall, he has a balanced and healthy body. He is associated with Ford Modelling Agency.

In 2000, he was in the music video named ‘She Bangs’ which was cast by the dancer Ricky Martins. He even did modeling for Armani and Abercrombie & Fitch. In 2002, he did television commercials for Mountain Dew and Pepsi. He then signed to Page 305 which is a modeling agency in Miami. He was cast by Al David for Vogue magazine and soon after appeared in campaigns for Abercrombie & Fitch, Nautica, Dolce & Gabbana, American Eagle Outfitters, and Emporio Armani. He signed with Ford Models in New York City.

In 2006, he starred in ‘She’s The Man’ which was named the greatest modern Shakespearean remake by Business Insider. He then starred in Step Up, which was his breakout role. In 2008, he starred in ‘Stop-Loss’ and in ‘Battle in Seattle’. He also played in short film named ‘The Trap’. He as on ‘A Guide to Recognizing Your Saints’. In 2009, he played in the drama named ‘Public Enemies’. He played a soldier in Dear John, a Screen Gems film based on a popular Nicholas Sparks bestseller. He, his wife Jenna Dewan, and their production partner Reid Carolin signed a two-year production deal in 2010 with Relativity Media for any movies they may develop during that time.

Who was Channing Tatum’s wife?

In 2006, Tatum met Jenna Dewan. They got married on 11 July 2009. They married at Church Estates Vineyards in Malibu, California. They have a daughter named Everly Elizabeth Maiselle Tatum who was born on 31 May 2013, in London.

But nearly after nine years of marriage, the couple announced that they were separating.

Then recently, he has been dating British pop singer Jessie J. They have been spotted at Jessie’s October 6 concert in Seattle. They were spotted at a mini-golf course together in that same city and other low-key appearances popped up on social media around the same time.

How much is Channing Tatum worth?

The well-known actor’s net worth is estimated to be $60 million. He has done a great hard work to reach this point.

Our contents are created by fans, if you have any problems of Channing Tatum Net Worth, Salary, Relationship Status, Married Date, Age, Height, Ethnicity, Nationality, Weight, mail us at [email protected]