Charlotte Emma Aitchison is professionally known as Charli XCX. Charli XCX is a British singer and songwriter who has been established as an independent artist. 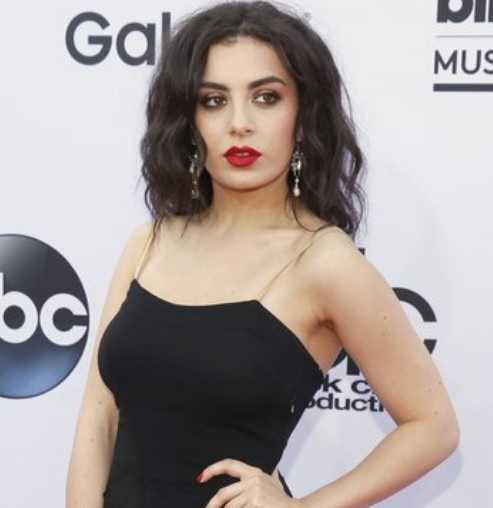 Charlotte Emma Aitchison is professionally known as Charli XCX. Charli XCX is a British singer and songwriter who has been established as an independent artist. Charli has also written hit songs for other artists as well.

Why is Charli XCX famous?

When was Charli XCX born?

Charli XCX was born on 2nd August 1992 in Cambridge, England, the U.K. Her birth name is Charlotte Emma Aitchison.

The 26th aged Charli was born in a family with a mixed origin. She was born to Jon Aitchison(Father) and Sameera(Mother). Her father is Scottish while her mother is Indian.

Jon, her father is an Entrepreneur and former show-booker, while her mother is a former nurse and flight attendant.

She is the only child of her parents.

How was Charli’s early life?

Charli XCX was raised in her hometown Start Hill, Essex. Her early childhood was spent within Bishops’ Stortford of Hertfordshire. Her nationality is British. She has a mixed ethnicity: Scottish-Indian. Her zodiac sign is Leo.

Charli studied at school, but quit it as her studies were not very successful, and she was not satisfied and interested in the curriculum. She went to “Bishop’s Stortford College”.

Later, she was a student of “UCL’s Slade School of Fine Art” in London, however, she quit it in the second year of study.

Charli started to write songs when she was in her early teens. Her parents wanted to support her and gave her some money for the development of her creativity.

The girl became a star in some underground clubs in London.

How is Charli XCX’s Career?

Charli starred her music in 2007 at the age of just 14. She took a loan from her parents and began recording an album. By early 2008, she had begun posting songs from her album on her ‘MySpace’ page.

Her music caught the attention of a promoter who ran illegal warehouse raves.

She started using the stage name “Charli XCX” and attended several raves. Her songs soon became hits with the local audiences and she shortly released the singles ‘!Franchesckaar!’ and ‘Emeline/Art Bitch.’

She then was signed to Asylum Records in 2010, from where she started her professional music career.

Charli’s vocal was also recorded in the song ‘End of the World’ in 2011. After the song was played on BBC’s Radio One, she gained a lot of popularity. She next released the single ‘Stay Away’, and ‘Nuclear Seasons’.  Both the singles gained significant attention.

In May 2012, Charli XCX released her first mixtape ‘Heartbreaks and Earthquakes’, then in 2012, her second mixtape ‘Super Ultra’. She released her debut studio album ‘True Romance’ in April 2013 that peaked at number 85 on the UK Albums Chart.

Soon Charli XCX began working on her second album, a song ‘SuperLove’ which was released in November 2013 that peaked at No 62 on the UK Singles Chart.

Then she was featured on the single ‘Fancy’ by Australian rapper Iggy Azalea, the same track that topped the US Hot 100 and gained her more popularity. During this time, Charli collaborated with a few other artists: Ryn Weaver, Rihanna, and man others.

Her album ‘Sucker’ was eventually released in December 2014 and became an international hit that peaked at 28 on the US Billboard 200. It also received favorable reviews from critics.

The song ‘Break the Rules’ was a huge hit, charting in several countries. It was listed as the fifth-best song of 2014 by the ‘Cosmopolitan’ magazine having nearly 150 million views.

She even sang “Boom Clap” in 2014 for the movie “The Fault in Our Stars”. In 2015 Charli XCX shared two noted songs, “Famous” and “Doing” alongside Rita Ora that was played 35 million times so far.

In July 2017, she released ‘Boys,’ the first single from her third album. It entered the charts in multiple countries, topping a few of them. Moreover, in 2018 Charli XCX released the songs; “5 In The Morning”,  “Focus”, “No Angel”, and “Girls Night Out”.

How is Charli XCX’s Personal life?

Charli XCX is currently single. In the past, she had been in a relationship with Ryan Andrews but they parted their ways. Moreover, she keeps her personal life very much private like nothing that no one could even doubt.

She considers herself a feminist and wrote her song “Body of My Own” as a feminist statement. Her views on the topic feminism are explained in the documentary “The World and Me”.

Charli likes going to the party, she likes to stay at home and watch her favorite TV series “The Big Bang Theory”.

What is the net worth of Charli XCX?

The famous singer Charli has been one of the highest-paid artists in the US. She has an estimated net worth of $75 million in combined earnings.

Charli XCX has taken the No. 1 spot on People With Money’s top 10 highest-paid singers for 2019.

She also owns several restaurants, a Football Team, she also has launched her own brand of Vodka, and is tackling the juniors market with a top-selling perfume (With Love from Charli) and a fashion line called “Charli XCX Seduction”.

How tall is Charli XCX?

The sensuous artist-songwriter Charli has a well-maintained body figure. She stands tall at a height of 5ft. 3inch (1.63m). She has a body weight of 55kg (121 lbs).

She has a fair complexion with dark brown eyes and black hair.

Our contents are created by fans, if you have any problems of Charli XCX Net Worth, Salary, Relationship Status, Married Date, Age, Height, Ethnicity, Nationality, Weight, mail us at [email protected]