Charlize Theron is a well-known actor and film producer. 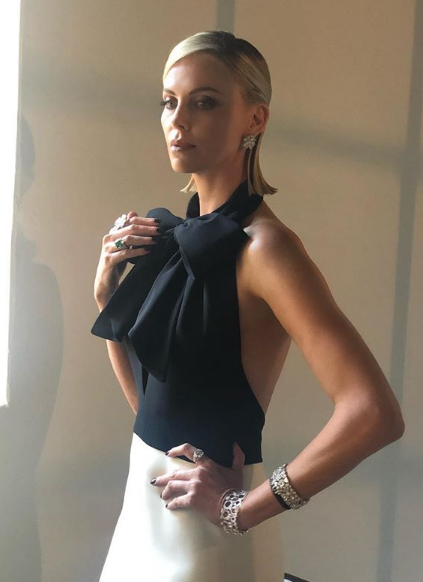 Charlize Theron is a well-known actor and film producer. She is best recognized for her performance in The Devil’s advocate. She has starred in several Hollywood films in her career.

Reportedly Charlize and Alexander have rekindled their relationship nearly six years after first dating, according to Life & Style. They are trying to keep things private but have reportedly been flirting on the set of their new film, political comedy Flarsky. The two are known to avoid the Hollywood scene and feel a bit like outsiders in the industry.

Brad Pitt and Charlize Theron Dating for a month

Charlize was born in Benoni, Transvaal Province, South Africa to Gerda Jacoba Aletta and Charles Jacobus Theron. She comes from an Afrikaner Family and she comes from an ancestry that includes a mixture of French, German and Dutch.

She moved to Benoni, where she spent most of her childhood days. Theron’s father who was an alcoholic was shot by her mother when he physically assaulted Charlize and her mother; however, she faced no charges.

Talking about her education, she went on to attend Putfontein Primary School and at the age of 13 was sent to a boarding school. She then began her studies at the National School of Arts based in Johannesburg.

Career and Achievements of Charlize Theron

Charlize Theron started out as a dancer and model prior to her acting career. She landed her first modeling contract at the age of 16. She spent a year working in Milan, Italy before moving to the United States. She pursued dancing in New York but her career ended with a knee injury. Following her injury, she moved to Los Angeles, California. While there she was discovered by talented agent John Crosby. She began appearing in films in the mid-1990s. Her first major role was that of “Mary Ann Lomax” in the thriller, The Devil’s Advocate (1997). The film was directed by Taylor Hackford and stars Keanu Reeves and Al Pacino. Other early films include Mighty Joe Young (1998), The Cider House Rules (1999) and Sweet November (2001). In 1999, she appeared on the covers of Vanity Fair and Playboy magazine.

Similarly, she portrayed real-life serial killer “Aileen Wuornos” in the crime-drama, Monster (2003). She gained 40 pounds for the role. Her performance earned her an Academy Award for best actress. She also won a Golden Globe and Screen Actors Guild Award. She then starred as “Josey Aimes” in the drama film, North Country (2005). That same year she held the title role in the film adaptation of “Aeon Flux”. In 2008, she appeared opposite Will Smith in the superhero film Hancock. She shaved her head for the role of “Imperator Furiosa” in Mad Max: Fury Road (2015) with Tomy Hardy. She starred as “Lorraine Broughton” in Atomic Blonde (2017). Other films include Young Adult (2011) with Patton Oswalt, A Million Ways to Die in the West ( 2014) with Seth MacFarlane, and The Huntsman: Winter’s War (2016) with Chris Hemsworth. She also narrated the animated superhero film, Astro Boy (2009). She voiced “Monkey/Sariatu” for the animated film Kubo and Two Strings (2016).

Additionally, she appears in 2018 happened in crime comedy Gringo, where she was accompanied by Joel Edgerton and Amanda Seyfried. Aside from that, actress voiced over the Morticia Addams in animated comedy film ‘The Addams Family (2019) and signed a contract to appear in yet unnamed Atomic Blonde sequel.

Net Worth of Charlize Theron

Charlize Theron net worth is estimated to be a total of 120 million dollars which speaks about her huge salary.

Charlize Theron has dated many men till date but has not had a significant relationship. She has always been very busy in acting and charity work.

Prior, She was in a relationship with actor Craig Bierko in 1990. She then started having an affair with Stephan Jenkins. Theron then began dating the Irish actor Stuart Townsend. The couple had starred together in Trapped, Head in the Clouds.

However, the relationship did not last long enough and they parted ways in January 2010. Then in 2014, she began dating actor Sean Penn and then split up in June 2015. She is currently single. She has adopted two children; a boy named Jackson and a girl named August.

She lives with them in Los Angeles. She is a successful mother of two children. She has not married till date and does not have a spouse.

Additionally, she has been an active philanthropist. She established the Charlize Theron Africa Outreach Project (CTAOP) in 2007. She is also a UN Messenger of Peace. Theron has also actively worked for PETA campaigns. She also supports same-sex marriage.

Moving towards her body measurements, she has always sported a very lean, slim, fit and even tight body. She stands 5 feet 10 inches tall and weighs around 55 Kg. Similarly, Her breast size is 36 inches, waist size is 24 inches and hip size is 36 inches which make her body measurements of 36-24-36 inches. Furthermore, she wears 9.5 (US) size of shoes and her bra cup size is 34B. Additionally, she has a pair of green eyes and blonde hair color.

Our contents are created by fans, if you have any problems of Charlize Theron Net Worth, Salary, Relationship Status, Married Date, Age, Height, Ethnicity, Nationality, Weight, mail us at [email protected]