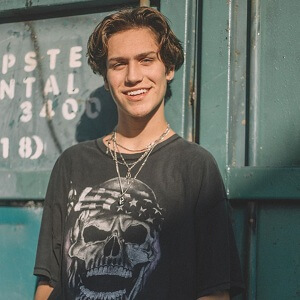 Chase Hudson is an American TikTok star, YouTube content creator, and social media personality. He is famous for his contents such as clothing haul, viral game challenges, Vlogs, mukbang, and much more.

Chase aka Lilhuddy is one of the co-founders of TikTok content house ‘The Hype House’. His amazing facial expressions and quick moves have made him such a sensation on the TikTok platform.

When was Chase Hudson born?

Chase Hudson who is also famously known as Lilhuddy was born on May 15, 2002, in California. As of 2020, his age is 18. He was born and brought up in California, United States.

There isn’t enough information shared on social media about his family or education. However, his father‘s name is Cole Hudson, and his mother‘s name is Tamora Hudson. According to several sources, Hudson is known to have studied with few online courses. He grew up along with 2 of his sisters, Marlena and Karissa Hudson.

How did Chase Hudon start his career?

Chase started his social media career just like other teenagers, he started by posting photos on Instagram and when TikTok got popular in America he was one of the creators of the early videos on TikTok. Before the video-sharing app was a great hit, Chase had started his own self-entitled YouTube channel.

His first Instagram post was posted in June 2018 and since then he gained over 6.6 million followers.  He gained a lot of recognition after his video collaboration with his girlfriend went viral. After gaining positive feedbacks from the crowd, he slowly started uploading more videos and gained even more popularity.

Chase along with other similar TikTok stars has collaborated together to create a group called “The Hype House” with the help of such viral sensations. Behind such fame lies the amazing skills of Chase. His undoubtedly great facial expressions have fans grooving along with him all the time.

What is Chase Hudson’s net worth?

Chase is a famous social media personality who seems to have earned a great sum of money out of his career. His Tik Tok videos and Instagram posts earn thousands of likes and views on a regular basis.

Chase Hudson’s net worth is calculated to be around $1 million US Dollars, as of 2019 with a base salary of $20K – $25K USD per month. We might even see his net worth soar as he is being singed by the biggest talent management company WME in the upcoming days.

Is Chase Hudson in a relationship?

Chase Hudson was single as per his statements, but as rumors conveyed, he was dating a fellow young and popular TikTok star named Charli D’Amelio. But both sides had denied the fact of being in a relationship with each other.

However, the pictures which they had uploaded told a different story. After months of speculation, Lil Huddy and Charli confirmed their relationship by going Instagram official on Valentine’s Day. But over a few months later,  he and Charli decided to end their relationship. As of now, he is single.

How tall is Chase Hudson?

Chase stands tall at a height of 5′ 7″ and weighs around 68 kgs. His appearance features a pair of beautiful blue eyes and brown hair.

He equally prefers the Instagram platform where he goes under the username @lilhuddy as well. Similarly, he is active on Twitter where he has garnered over 1.9M followers joining in July 2015. Moreover, he has his own self entitled YouTube channel amassing over 1.33 M subscribers.

Our contents are created by fans, if you have any problems of Chase Hudson Net Worth, Salary, Relationship Status, Married Date, Age, Height, Ethnicity, Nationality, Weight, mail us at [email protected]