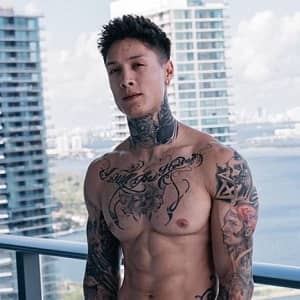 Chris Heria is a popular American fitness athlete and instructor. He is popular on the internet for his THENX, the calisthenics academy, and training program, and for his fitness-oriented Youtube channel.

When was Chris Heria born?

Chris Heria, full name Christopher D. Heria, was born on the 21st of December, 1991 in Miami, Florida. As of 2020, his age is 29. His nationality is American and his ethnicity is mixed.

Chris is private when it comes to his personal life. As such, he has not revealed any information on his parents, not even their names. He grew up in the U.S. alongside a brother, Stefan Heria. Chris and Stefan have collaborated in several videos on Chris’s Youtube channel.

Talking about his education, Chris attended St. Brendan High School. Eventually, he graduated from Southwest Miami Senior High School in 2008. He was a fitness enthusiast from a young age and this passion along with Chris’s enthusiasm helped him build a career around fitness.

How did Chris Heria build his career?

Thanks to his passion for fitness and his hard work Chris made a fitness athlete. He even competed in several competitions revolving around fitness and became well known as a Pro bar athlete and a Street workout champion. Slowly he started delving deeper into the fitness world and became a professional fitness instructor. He also set up his own Youtube channel, THENX, in which he offers free and instructional workouts and guides to get into fitness and build a physique that you want. Most of his content revolves around calisthenics and ways one can build a great muscular physique by exercising at home.

On this channel, Chris has gathered over 6.4 million subscribers. He also has a second channel, that’s more personal, titled Chris Heria. This channel has of several vlogs and storytimes on Chris’ life along with his usual workout videos. Although Chris is good at what he does, he has been heavily criticized in the past for some of his advice. Many fitness experts called him out for some of his videos that gave misleading advice. One such video was titled, 8 minute workout to Burn BELLY FAT, and experts all over the internet called him out, claiming that the content was misleading.

Most of his content is solid though, and he has made quite a reputation for his calisthenics academy, THENX which offers detailed workout plans for people with different goals in regard to fitness. Chris is also a representative of BarStarzz, a popular workout team.

What is Chris Heria’s net worth?

As of now, Chris has an estimated net worth of roughly 4 million U.S. dollars. He has not revealed anything regarding his annual salary.

What are Chris Heria’s physical statistics?

Chris Heria stands at a height of 5 feet 9 inches and his weight is roughly 75 kilograms. He is blessed with good looks and has an amazing muscular physique with a lot of tattoos. His eyes are brown and his hair is black in color.

Who is Chris Heria dating?

Chris is currently in a relationship with his girlfriend. He has kept most details on their relationship private and has not even revealed his girlfriend’s name. He has featured her on his social media though. Chris also has a son named Zen, who was born in 2011. Chris was still young at the time and his ex-girlfriend is the mother of the Zen. He doesn’t talk about Zen’s mother much so, this part of his life is pretty much a mystery.

Chris is active and popular on social media. As of now, he has over 1.3 million followers on Insatgram, and over 109k followers on Facebook account.

Our contents are created by fans, if you have any problems of Chris Heria Net Worth, Salary, Relationship Status, Married Date, Age, Height, Ethnicity, Nationality, Weight, mail us at [email protected]