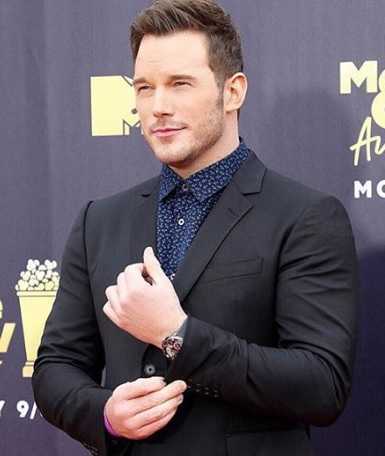 Chris Pratt is a popular American actor. His birth name is Christopher Michael Pratt. He is best known for his leading role as Star-Lord in Guardian of Galaxy in 2014. He also reprised the role of Star-Lord in its sequel, Guardians of the Galaxy Vol. 2.  in 2017 and Avengers: Infinity War in 2018, and will appear in its sequel, Avengers: Endgame in 2019. He has also earned recognition for his work in The Lego Movie, Jurrasic Park franchise, The Lego Movie, The Magnificient Seven, and Passengers. Earlier, he rose to prominence for his role as Andy Dwyer in the NBC sitcom, Parks and Recreation from 2009 to 2015. He got engaged to an author, Katherine Schwarzenegger, daughter of Arnold Schwarzenegger on 13 January 2019.

They got engaged on 13 January 2019 and went to Instagram on the next day to announce it. Both the newly-weds posted the same picture on their respective accounts, where Chris wrote, “Sweet Katherine, so happy you said yes! I’m thrilled to be marrying you. Proud to live boldly in faith with you. Here we go!”.

Chris is seen kissing his newly engaged fiance on the side of her forehead near the eyes, whereas Katherine outs her arm around Chris displaying the beautiful engagement diamond ring.

The 29-years old Katherine Schwarzenegger is an author and is the daughter of Arnold Schwarzenegger and the grandniece of former US President, John F. Kennedy.

– his role as Andy Dwyer in NBC sitcom, Parks and Recreation.

Chris Pratt was born on 21 June 1979. His birth place is in Virginia, Minnesota in the United States. He holds American nationality. He was born to a father, Daniel Clifton Pratt and a mother, Kathleen Louise. He has 2 siblings, a brother, Cully Pratt and a sister, Angie Pratt. He belongs to White ethnicity. His zodiac sign is Cancer. His father died of multiple sclerosis in 2014. His mother is of Norwegian descent. He grew up in Lake Stevens, Washington after his parents moved there when he was 3 years old. He was raised Lutheran and later worked for Jews for Jesus. He eventually became a non-denominational Christian.

He attended and graduated from Lake Stevens High School in 1997. He then joined a community college to study further but dropped out in the mid of the first semester.

He started working as a discount ticket salesman and daytime stripper. He then became homeless in Maui, Hawaii and started living in a van or a tent on the beach.

He was 19-years old when he was discovered by actress and director Rae Dawn Chong at the Bubba Gump Shrimp Company restaurant in Maui he worked.

Chris debut in acting came in 2000 when actress and director Rae Dawn Chong cast him the role of Devon in the short film Cursed Part 3.

He made his television debut in an episode of the 2001 television series, The Huntress.

He landed the lead role of Bright Abbot on the series, Everwood, which run from 2002 to 2006 until its cancellation.

He rose to prominence after he landed the lead role of Andy Dwyer in the NBC sitcom, Parks and Recreation from 2009 to 2015. It is considered his breakthrough in the acting career.

He also appeared in the minor roles from 2003 to 2013 in several films including The Extreme Team, Strangers with Candy, Walk the Talk, Wieners, Wanted, Bride Wars, Deep in the Valley, Jennifer’s Body, The Multi-Hyphenate, Take Me Home Tonight, Moneyball, What’s Your Number?, 10 Years, The Five-Year Engagement, Zero Dark Thirty, Movie 43, Mr. Payback, Delivery man, and Her.

He rose to prominence after he landed the lead role of Star-Lord in the Marvel’s 2014 film, Guardians of Galaxy.

His role as Owen Grady in the Jurrasic Park franchise 2015 film, Jurrasic World became his commercially most successful film at the time.

He reprised his role of Owen Grady in its sequel Jurrasic World: Fallen Kingdom in 2018.

He also starred in the main role in the 2016 film, The Magnificient Seven and Passengers.

He will reprise the role of Star-Lord in the 2019 film Avengers: Endgame. The movie is in post-production.

Chris Pratt won the CinemaCon Breakthrough Performer of the Year Award for his role as Star-Lord in the 2014 film, Guardians of the Galaxy. He also won the Detroit Film Critics Society Best Ensemble Award and Saturn Best Actor Award for the same role.

He later won the Teen Choice Movie Actor: Sci-Fi Award for his reprised role as Star-Lord in the Guardians of the Galaxy Vol. 2.

The 39-years old actor is currently engaged to American author Katherine Schwarzenegger. They got engaged on 13 January 2019. She is the daughter of popular actor and politician Arnold Schwarzenegger and the 35th President of the United States of America, John F. Kennedy. Katherine’s mother, Maria Shriver reportedly set their dates. They were first seen together in June 2018.

Previously, Chris was married to Anna Faris. She is an American actress, comedian, voice artist, producer, author, podcaster, fashion model, and occasional singer. They first met on the set of Take Me Home Tonight in 2007. They later got engaged in late 2008 and got married in Bali, Indonesia in the following year. They gave premature birth to a son, Jack in August 2012. After 9 years of marriage, they separated in 2017 and their divorce was finalized in October 2018.

He lives in Los Angeles, California at present.

Net Worth, Income, Source of Income

Our contents are created by fans, if you have any problems of Chris Pratt Net Worth, Salary, Relationship Status, Married Date, Age, Height, Ethnicity, Nationality, Weight, mail us at [email protected]