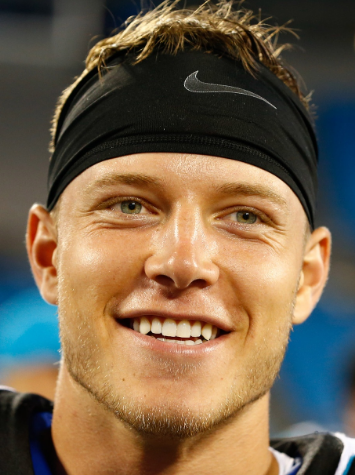 Christian Jackson McCaffrey famed as Christian McCaffrey is a famous American football running back for the Carolina Panthers of the National Football League (NFL). He played college football at Stanford and was drafted by the Panthers with the eighth overall pick in the 2017 NFL Draft. He was the AP College Football Player of the Year and the runner-up for the Heisman Trophy and he holds the NCAA record for most all-purpose yards in a season with 3,864. Overall, he is a very talented footballer.

NFL Fantasy Player of the Year is Christian McCaffrey.

Christian McCaffrey’s record-setting 2019 season received a major boost on Saturday when he was voted NFL Fantasy Player of the Year at the league’s ninth annual NFL Honors ceremony, which took place ahead of Super Bowl LIV. After joining the exclusive 1,000-1,000 party, McCaffrey was named to the AP All-Pro First Team at both the running back and flex positions after a stellar season. He was also selected to his first Pro Bowl and was named to the PFWA All-NFL and Sporting News All-Pro teams. He had the third-most scrimmage yards in NFL history, with 2,392 yards. He had 19 total touchdowns in 2019, which was tied for the most in the NFL.

What is Christian McCaffrey’s birthplace?

Christian McCaffrey was born on June 7, 1996, in Castle Rock, Colorado. He celebrated his 23rd birthday in 2019 with his friends and family. His race is White and his nationality is American. He went to Stanford College after graduating from Valor Christian High School. His father, Ed McCaffrey, was a wide receiver in the National Football League for the 13th season, and his mother, Lisa Sime, was a Stanford soccer player. grew up with his older brother Max, who is now a wide receiver for the San Francisco 49ers in the NFL, his younger brother Dylan, who plays football for the Michigan Wolverines, and his youngest brother Luke, who is a high school quarterback in Colorado. He is a devout Christian.

What was Christian McCaffrey’s first job?

Christian started all 13 games as a true freshman for Stanford in 2014, accumulating 300 rushing yards on 43 carries and 251 receiving yards on 17 catches, totaling two touchdowns.

He also finished second in the 2015 Heisman Trophy voting to Alabama’s Derrick Henry.

He missed the Cardinal’s 17-10 victory over Notre Dame in the 2016 edition of the Notre Dame-Stanford rivalry after being injured during the team’s 42-16 defeat to Washington State on October 8.

He was selected the CoSIDA Academic All-American of the Year and was named to the 2016 All-Pac-12 first team. He agreed to join the 2017 NFL Draft after the season.

On the 19th of December, he revealed that he would not play in the team’s Sun Bowl game against North Carolina, instead deciding to prepare for the NFL Draft.

Sports Illustrated ranked him as the third-best running back in the draft, Pro Football Focus ranked him fourth-best, and NFLDraftScout.com and ESPN ranked him second-best.

In the 2017 NFL Draft, the Carolina Panthers picked him with the eighth overall selection in the first round.
After fourth-round pick Leonard Fournette, he was the second running back taken.

He made his NFL debut against the San Francisco 49ers in the Panthers’ season opener, recording 47 rushing yards, 38 receiving yards, and a lost fumble in a 23-3 win.

He became just the second white running back to rush for 1,000 yards in a season after Craig James in 1985, and the first since Peyton Hillis in 2010.

He broke LaDainian Tomlinson’s record for most catches by a running back in an NFL player’s first three seasons with his 53rd reception.

During the 30-24 loss to the Seattle Seahawks in Week 15, he rushed 19 times for 87 yards and two touchdowns while also catching eight passes for 88 yards.

In a 42-10 loss to the New Orleans Saints in Week 17, he rushed nine times for 26 yards and a touchdown while also catching seven passes for 72 yards.

As a result of his results, he was selected for his first Pro Bowl, which will be held on January 26, 2020.
What is Christian McCaffrey’s net worth?

Do you know whether Christian McCaffrey is married or not?

Christian McCaffrey has never been married. However, he is rumored to be dating Olivia Culpo, an American fashion influencer, reality television and social media celebrity, and former beauty pageant winner. The couple was spotted vacationing in Mexico with some of their mates. They allegedly met through a mutual friend and have been together ever since.

Brooke Pettet, a journalism student who attended the Walter Cronkite School of Journalism from 2013 to 2017, was his previous girlfriend. He’s also been connected to Marybeth Sant.

How tall is Christian McCaffrey?

Christian McCaffrey is a very handsome person with a tall height of 1.80 m. His balanced weight consists of 93 Kg. His other body measurements have not been revealed by any sources yet but it will be added once we get information about it. Overall, he has got a  healthy body with an athletic body build attracting a lot of people towards him. He has also got a nice personality.

Our contents are created by fans, if you have any problems of Christian McCaffrey Net Worth, Salary, Relationship Status, Married Date, Age, Height, Ethnicity, Nationality, Weight, mail us at [email protected]