Christine Brown is an American Reality Tv Personality and Author. She is best known as the third wife of Kody Brown.  She is best known for appearing in the TLC reality series, Sister Wives along with her husband Kody Brown, and his other wives Meri, Janelle, and Robyn since 2010. Its 14th season premiered on January 5, 2020. 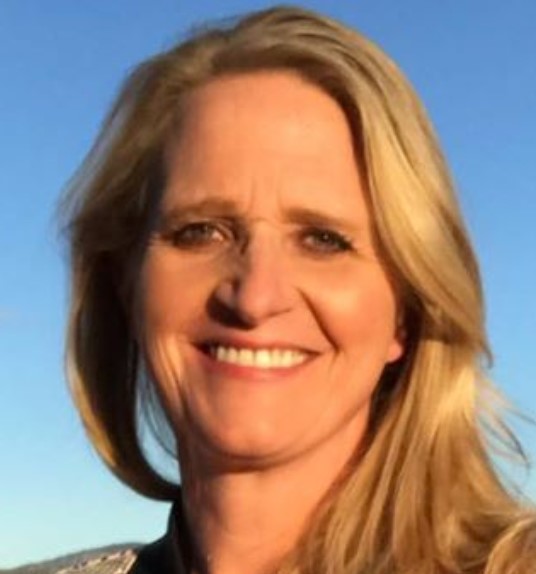 Christine Brown is an American Reality Tv Personality and Author. She is best known as a third wife of Kody Brown.  She is best known for appearing in the TLC reality series, Sister Wives along with her husband Kody Brown, and his other wives Meri, Janelle, and Robyn since 2010. Its 14th season premiered on January 5, 2020.

Christine Brown is also active in social media platforms with over 375k followers on Instagram @christine_brownsw and over 22.2k followers on Twitter @SWChristine2020.

What is Christine Brown famous for?

Where was Christine Brown born?

Christine Brown was born in  Taylorsville, Utah, the USA on April 18, 1972. Her birth name is Christine Ruth Allred. She was born to father, Rex Allred, and mother, Ruthann LeBaron. Her parents were practicing polygamists at the time of her birth, but there is no information about her father’s other wives and how many siblings she has.

She holds an American nationality and belongs to a White Caucasian ethnic background. Her zodiac sign is Aries. She believes in Christianity.

Regarding her education, she attended Taylorsville High School and graduated in 1990 from there.

Christine Brown appeared in the TLC reality television series, ‘Sister Wives’ which premiered on September 26, 2010. The show documents the life of a polygamist family, which includes patriarch Kody Brown, his four wives Meri, Janelle, Christine, and Robyn) and their 18 children.

In the first season, the show telecasted Brown’s marriage to his fourth wife, Robyn Sullivan and it ran from September 26 until November 21, 2010, for nine episodes.

Kody Brown and his four wives have stated they participated in the show to make the public more aware of polygamist families and to combat societal prejudices.

Christine Brown is a married woman. She is spiritually married to Kody Brown on March 25, 1994. Their marriage is not legal. The couple has 6 children together, five daughters named Aspyn Brown, Mykelti Brown, Gwendlyn Brown, Ysabel Brown, and Truely Brown, and a son named Paedon Brown.

Besides Christine, Kody has other three wives; Meri, Janelle, and Robyn. Christine is his third wife. Among four wives, Kody legally married only Meri, and Robyn and the other two marriages are considered as spiritual marriage.

Kody was legally married to Meri Barber on April 21, 1990. Kody divorced Meri in September 2014 to legally marry Robyn. Since then, Kody and Mary remain a spiritually married couple. The couple has a daughter named Mariah.

On January 20, 1993, Kody was spiritually married to Janelle Schriever. They have 6 children together named Madison, Savanah, Logan, Hunter, Garrison, Gabriel.

Altogether, Kody has 18 children and two grandchildren named Axel, and Evangalynn who were born to Janelle’s daughter Madison.

Christine Brown is a beautiful woman with a fair skin tone. She stands at a height of 1.7 m (5 feet and 7 inches) tall and her body weighs around 55 kg (121 lbs.). Her body measurements are 35-27-37 inches. She wears a bra size of 34B. Her shoe size is 7(US). Her eye color is Hazel and her hair color is Blonde. Her sexual orientation is Straight.

Christine Brown has quite good earnings from her professional career as a reality TV personality. She is also co-founder of the clothing line, ‘My Sisterwife’s Closets’. She has been appearing on the TLC reality series Sister Wives since 2010. The series is running on its 14th season, which premiered on January 5, 2020. As of 2020, Christine’s net worth is estimated to be $500k dollars.

Our contents are created by fans, if you have any problems of Christine Brown Net Worth, Salary, Relationship Status, Married Date, Age, Height, Ethnicity, Nationality, Weight, mail us at [email protected]