Clint Frazier is a famous American professional baseball player who currently plays for the New York Yankees of Major League Baseball(MLB) as an outfielder. 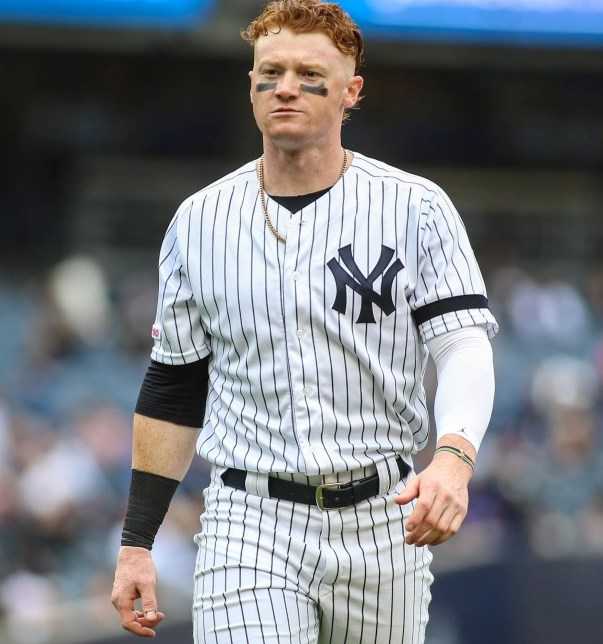 Clint Frazier is a famous American professional baseball player who currently plays for the New York Yankees of Major League Baseball(MLB) as an outfielder. He is also known as “Red Thunder”.

What is Clint Frazier famous for?

-Famous as a professional baseball player of MLB.

When was Clint Frazier born?

Clint Frazier was born on 6th September 1994 in Loganville, Georgia. His birth name is Clint Jackson Frazier. American is his nationality. His ethnicity is Scottish. Virgo is his zodiac sign.

He was born to Mark Frazier(father) and Kim Frazier(mother). He has one elder sister, Taylor Frazier. His father was a salesman while his mother was a preschool teacher. He was raised in his hometown, Georgia along with his sisters. He did his schooling at Loganville High School.

He played baseball as a junior in 2012 and scored 24 home runs and he got the Jackie Robinson Award which is given to Perfect game national player of the year. He attended the University of Georgia with a college baseball scholarship to play for the Georgia Bulldogs.

How is Clint Frazier’s career?

-Clint Frazier started his professional baseball career by being selected by The Cleveland Indians with the fifth overall selection of the 2013 draft.

He signed with the club instead of enrolling at Georgia Bulldogs with a $3.5 million signing bonus.

-He made his professional baseball debut in Rockie Level Arizona League with a home run and a triple. For the club in 2013, he played 44 matches and hit five home runs.

-The Cleveland Indians traded him to New York Yankees on 31st July 2016. He was assigned to Scranton/Wikes-Barre Railriders where he played 73 games with 12 home runs and 42 RBIs.

-On 1st July 2017, he was promoted to Major leagues by The New York Yankees. He scored his 1st career walk-off home run against Milwaukee Brewers.

-At the end of 2017, he suffered left oblique strain so, he began 2018 on the disabled list. He was called up to Major Leagues many times but could not play from his injury

-On 5th September 2018, the manager Aaron Boone said that he would miss the rest of the season to get treatment for the injury.

-In 2019, he was announced to start the season in the minors. He hit two home runs against the Orioles on 6th April. In spite of his strong start to the season, recently on 16th June, he was optioned back to Minor leagues.

Who is Clint Frazier dating?

The handsome player, Clint Frazier is in a love relationship with his girlfriend Elizabeth Faith Jewkes. The couple seems to be open in public as they are often seen together.

What is the net worth of Clint Frazier?

The famous player, Clint Frazier has an estimated net worth of $1 million. He has great earnings from his profession.

In 2013, Frazier signed a $3.5 million signing bonus with Cleveland Indians.

How tall is Clint Frazier?

Clint Frazier has a well maintained perfect body build. He stands tall with a height of 6ft. 1inch.(1.85m). He has a bodyweight of 86kg.

Our contents are created by fans, if you have any problems of Clint Frazier Net Worth, Salary, Relationship Status, Married Date, Age, Height, Ethnicity, Nationality, Weight, mail us at [email protected]