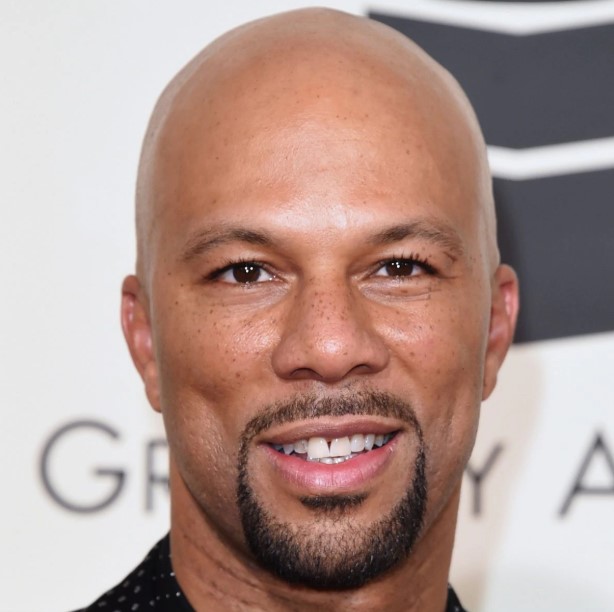 Common born as Lonnie Lynn is an American rapper, actor, and writer who first rose to prominence in the 1990s with the release of his debut album, “Can I Borrow A Dollar?”(1992). After maintaining an underground following into the late 1990s, he gained mainstream success through his work with the Soulquarians.

He won his first Grammy Award for Best R&B Song for the Erykah Badu single “Love of My Life” in 2003 followed by his second Grammy for Best Rap Performance by a Duo or Group for “Southside”(featuring Kanye West), from his 2007 album, “Finding Forever”.

Common’s best-of album, “This is me Then: The Best of Common”, released in 2007, is a compilation album from his early rap years spanning 1992 to 1997. Common got his first Academy Award for Best Original Song, for his song “Glory” from the 2014 film, “Selma” in which he co-starred as Civil Rights Movement leader James Bevel.

Besides, Common is known for his relationship with popular rapper, Kanye West, and his romantic link with a number of gorgeous ladies including Tiffany Haddish who confirmed their relationship in August 2020.

What is Common Famous for?

Where was Common Born?

Common was born on March 13, 1972, in Chicago, Illinois, United States. His birth name is Lonnie Corant Jaman Shuka Rashid Lynn Jr. His nationality is American. Lynn belongs to African-American ethnicity while Pisces is his zodiac sign.

Lynn was born at the Chicago Osteopathic Hospital in Chicago’s Hyde Park neighborhood as the son of Lonnie Lynn Jr.(father) and Mahalia Ann Hines(mother). His father, Lonnie nicknamed Pops was a former ABA basketball player turned youth counselor while his mother, Mahalia was the educator and former principal of John Hope College Preparatory High School.

Lynn’s parents divorced when he was six years old, so he was raised by his mother, as his father had to move to Denver, Colorado, but he remained active in Common’s life. His father even got Lynn a job with the Chicago Bulls as a teenager.

Lynn attended Luther High School South in Chicago, during which he began rapping along with two of his friends, with whom he formed C.D.R., a rap trio that opened for acts such as N.W.A and Big Daddy Kane. After the trio was dissolved, he began a solo career under the stage name of “Common Sense”.

Later, he attended Florida A&M University for two years under a scholarship and majored in business administration.

Who is Common’s Wife and Children? Is Common Dating Tiffany Haddish?

Common was previously in a relationship with several gorgeous ladies to date. Common has only a daughter named Omoye Assata Lynn born in 1997 with his then-girlfriend, Kim Jones. Previously, he dated beautiful American R&B singer-songwriter, Erykah Badu, in around 2002. Badu was one of People Magazine’s 50 Most Beautiful People in 1998 with whom he was in a relationship for 2 years till 2002. They were even engaged at a time.

He then dated a seasoned movie actress, Taraji P. Henson in 2005 with whom he was in relation for 2 years till 2007. Shortly after, he began dating the popular tennis star, Serena Williams that lasted for over 3 years till 2010. He was also in a relationship with beautiful American actress, Laura Dern in 2016. Common was also in a relationship with the political Commentator for CNN and Political Analyst for NPR, Angela Rye in 2017, but they eventually broke up in March 2018.

Common has had an encounter with Karrine Steffans(1999). Currently, Common is dating the popular actress and comedian, Tiffany Haddish with whom he first met in 2018 while they were filming the movie, “The Kitchen” and became friends. In April 2020, he went on the virtual Bumble date with Tiffany to raise money for front-line workers during the pandemic.

Their relationship was confirmed by Tiffany during a discussion of her newly shaved head last week, July 2020, on a profanity-filled episode of the podcast “Steve-O’s Wild Ride” in August 2020. She also revealed that they were together in quarantine.

Reflecting his relationship with his daughter Omoye, romantic relationships, his parents, and his struggle to cement his perspective in the concept of love, he released his second memoir entitled “Let Love Have The Last Word: A Memoir” in May 2019.

Besides, in May 2020, in response to the COVID19 pandemic, Common launched a social media campaign through Imagine Justice, dubbed #WeMatterToo.

What is the Net Worth of Common?

Common has quite great earnings from his professional career as a rapper, also as an actor and writer. Having started his career since 1992, Common has managed to amass a healthy fortune from his several albums, several movies, and also from his memoir. His net worth is estimated to be around $45 million.

In 2008, Common made an estimated $12 million, making him equal in earnings to Eminem and Akon, tied for the 13th highest-grossing Hip-Hop artist. The same year, Common launched a new clothing line in partnership with Microsoft titled “Softwear” in 2008. His source of earnings includes his several albums, movies, modeling, and advertisement deals.

He has starred in a television commercial for the 2008 “Lincoln Navigator”, also in NBA 2K8 in NBA Blacktop mode, in an ad for Microsoft’s Zune, he also had signed a deal with New Era to promote their new line of Layers fitted caps in 2007. His song “Be (intro)” was also featured in a commercial for BlackBerry in 2011.

How Tall is Common?

Common is a good-looking Black man in his 40s. With his perfect voice-tone and a manly personality, Common has managed to win several hearts all around the world. He stands tall with a height of 6ft.(1.83m) while his body weighs around 85kg(187 lbs).

He has a brown complexion with brown eyes and bald hair. He has a well-maintained athletic body physique with 44 inches as his chest size, 35 inches as his waist size, and 16 inches as his biceps size.

Our contents are created by fans, if you have any problems of Common Net Worth, Salary, Relationship Status, Married Date, Age, Height, Ethnicity, Nationality, Weight, mail us at [email protected]

David Price is a British professional boxer. He has held multiple heavyweight titles at regional level, including the British and Commonwealth titles from 2012 to 2013, and has challenged once for the European title in 2015.