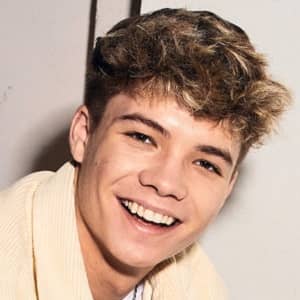 Connor Finnerty is an American dancer, model, actor, and social media personality. He came to the limelight as a competitor in the Dance-Off Juniors show and as a member of the immaBeast dance company. He has featured in commercials and music videos of famous artists such as Derek Hough, Meghan Trainor, Zac Efron, etc.

How old is Connor Finnerty?

Connor Finnerty was born as Connor Grant Finnerty, on March 28, 2003, in Roseville, California, US. As of 2020, his age is 17. He was born to parents Mike Finnerty (father) and Carol Finnerty (mother). He is the youngest of his parents’ three children and has an older brother named Ryan, and an older sister named Haylee.

Finnerty loved dancing from an early age and has trained different dance forms such as ballet, lyrical, and jazz. He also used to play different sports such as baseball, soccer, and basketball when he was younger. At the age of 12, moved to Los Angeles in 2015, to pursue his dance career. His ethnicity is Caucasian.

How did Connor Finnerty pursue his career?

Connor Finnerty started his career by competing in various national-level solo and group dance competitions specializing in the hip-hop and technical categories. He then joined ‘The Rage Entertainment Complex’ and the ‘KAST Academy of the Arts’. Moreover, he also won a national title for a hip-hop duet as a member of ‘The Rage Boyz Crew.’

After moving to LA in 2015, he grabbed the headlines after appearing in the show, ‘Dance-Off Juniors‘ as a contestant. The audience loved his performances immediately and soon he established himself as a professional dancer.

After getting TV exposure with the show, he received offers for modeling and acting. He took the offers and worked in commercials and music with Derek Hough, Meghan Trainor, and Zac Efron which further increased his popularity.

In 2016, he landed a role in the animated short drama ‘Framed: The Adventures of Zion Man.’ The next year, he made an appearance in the music video of ‘I Believe in You’. It made him more famous as he appeared as the teenage version of ‘Derek Hough’. Currently, he is a member of the ‘Millennium Crew & Company’ and ‘ImmaBEAST.’

As of July 2020, his videos have gained over 4.6 million views and he has more than 65k subscribers on his channel.

How tall is Connor Finnerty?

Finnerty stands at a height of 5 feet 7 inches and weighs around 60 kg. He has blond hair and a pair of brown eyes.

How much is Connor Finnerty worth?

Connor Finnerty has an estimated net worth of around $200k as of 2020. He has earned a decent amount of money from his career as a dancer, social media personality, and actor.

Is Connor Finnerty dating anyone?

Connor Finnerty is currently single and not dating anyone. He was rumored to have been in a relationship with fellow dancer, Jayden Bartels. After moving to LA, they trained together and eventually became best friends. Moreover, some of his most popular videos on Youtube are his dance collaborations with her. However, both of them have never confirmed dating each other.

Our contents are created by fans, if you have any problems of Connor Finnerty Net Worth, Salary, Relationship Status, Married Date, Age, Height, Ethnicity, Nationality, Weight, mail us at [email protected]