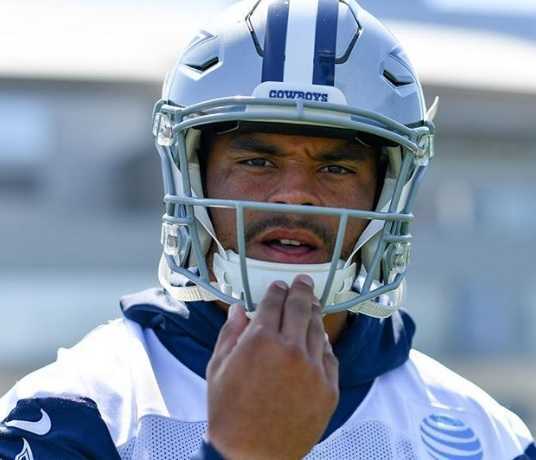 Rayne Dakota “Dak” Prescott, professionally known as Dak Prescott is an American football quarterback for the Dallas Cowboys of the National Football League (NFL). He played college football for the Mississippi State Bulldogs. He was selected by the Cowboys in the fourth round of the 2016 NFL Draft to play professional football. After Cowboys’ starter, Tony Romo was injured in the preseason, Prescott got a chance to start quarterback for Cowboys. Prescott performed very well on the field and managed to set several rookie quarterback records. He also helped his team clinch the top seed in their conference. For his amazing performance for Cowboys, he was named the NFL Offensive Rookie of the Year. He also earned a Pro Bowl selection.

Prescott’s club Dallas Cowboys had a rough start to the NFL 2018 season. The Cowboys were defeated by Carolina Panthers by 16-8. The Cowboys were chained throughout the game. The Cowboys committed 10 penalties for 85 yards and gave up six sacks. Prescott completed 19 of 29 passes for 170 yards in the game.

Prescott was born to a father Nathaniel Prescott and a mother Peggy Prescott on July 29, 1993, in Sulphur, Louisiana, United States. His father is an African American and his mother European American. Prescott has three older brothers, Tad, Jace and Elliott, and an older sister, Natalie Prescott-Smith. In November 2013, his mother died of colon cancer. Prescott attended Haughton High School in Haughton, Louisiana. He played football there for the Buccaneers. As a senior, Prescott completed 159-of-258 passes for 2,860 yards and 39 touchdowns in total. He led Haughton to become 2010 District 1-AAAA Champions.

In 2011, Prescott wore the redshirt as a true freshman with Mississippi State. In 2012, Prescott played in 12 games as a backup to Tyler Russell. in 2013 season, Russell suffered a concussion and Prescott took over as the starter replacing Russell. He played in 11 games and achieved the MVP of the 2013 Liberty Bowl after leading the Bulldogs to a victory over the Rice Owls. Prescott was ranked seventh in the passing yards, tied for fifth in rushing touchdowns and fourth in the total yard and total touchdowns following his performances in 2013 season. Prescott was also named the 2013 SEC Fall Academic Honour Roll. Prescott led Bulldogs to the Orange Bowl in 2014 season. Before 2015 season, Prescott was named a 2015 National Player of the Year Candidate and was selected to two Preseason All-American teams, Athlon Sports and Phil Steele. He was chosen First Team Preseason ALL-SEC by the media. He became the fourth player in FBS history to pass for 60 touchdowns and rush for 40 touchdowns in a career during the 2015 season. The other three players to do so were Dan LeFevour of Central Michigan, Tim Tebow of Florida, and Colin Kaepernick of Nevada. He is also the all-time third rushing yards by a quarterback in SEC history. And he ranks 4th in SEC history 107 total touchdowns and fifth in total yards. Prescott set the school single-game record and tied the SEC single-game record for touchdowns responsible for with seven and also set a new school record for touchdown passes in a single game for Bulldogs against Arkansas in 2015. For which, he was named the AutoNation National Offensive Player of the Week by the Football Writers Association of America, the Davey O’Brien Award National Quarterback of the Week, a Manning Award Star of the Week by the Allstate Sugar Bowl and the SEC offensive player of the week. Prescott also became the first player in school history to throw for over 300 yards and rush for over 100 yards in the same game. He was also placed on several national award watch lists in 2015. For collegiate career, Prescott finished third in SEC history in total yards, and fourth in total touchdowns with 38 school records in his bag.

Prescott joined the 2016 NFL Draft with a plan to acquire a young quarterback to develop behind Tony Romo. Prescott got selected in fourth round behind Paxton Lynch and Connor Cook. Prescott became first Dallas Cowboys quarterback in history to wear #4. He switched his previous #10 with #4 in honour of his mother’s birthday (September 4). Jameill Showers and Prescott both tried their effort to establish backup to starter Tony Romo. Prescott was selected by the Cowboys coaching staff. After starting quarterback Tony Romo’s injury to vertebral compression fracture during the preseason and Prescott performing well, Prescott was named the Cowboys starter for the beginning of the 2016 season.
Prescott made his professional competitive debut as a rookie on September 11, 2016, at home against the New York Giants. He became the fourth rookie quarterback to open the season as a starter in franchise history, and the first rookie to start at quarterback for the Cowboys since Quincy Carter in 2001. Prescott threw his first NFL touchdown during the Cowboys’ Week 3 fixture against the Chicago Bears. Prescott started all 16 games in 2016 season and was ranked No. 4 among NFL quarterbacks in 2016. He had 3,667 passing yards, 282 rushing yards, 29 total touchdowns and only four interceptions with 67.8 completion percentage. Cowboys finished the season with 13-3 record and grabbed the NFC East title. Cowboys season ended in the divisional round of the NFL playoffs losing against Green Bay Packers. Prescott was named the NFL Offensive Rookie of the Year and was ranked 14th by his peers on the NFL Top 100 Players of 2017. Prescott finished 2017 season with 3,324 passing yards, 22 passing touchdowns, 13 interceptions, 357 rushing yards, and six rushing touchdowns.

Rumours say Dak Prescott might have been in a relationship with former Playboy model Dallas Nicole Parks. Rumours also point to a girl named Yasmine Nicole Lee and another one named Rosette Abud. Officially, it is still under dark light about his relationships status. Prescott has established The Faith Fight Finish Foundation in honour of her mother, who died of colon cancer. The foundation helps people to deal with adversity.

Dak Prescott has earned $2.75 millions over three seasons at Dallas Cowboys. He earned $636K in 2017 and has a salary of $726K this season. Prescott has a contract in the club and also earns through sponsorships as well.

Our contents are created by fans, if you have any problems of Dak Prescott Net Worth, Salary, Relationship Status, Married Date, Age, Height, Ethnicity, Nationality, Weight, mail us at [email protected]