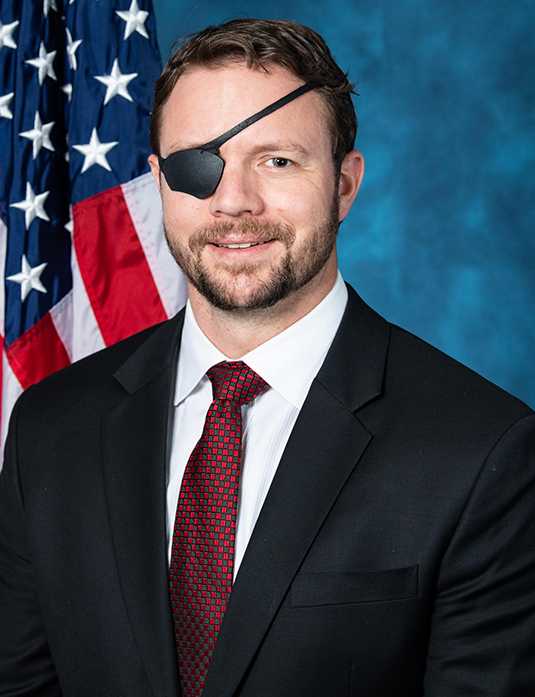 Daniel Reed Crenshaw, popularly known as Dan Crenshaw is an American politician and former US Navy SEAL officer. He is currently serving as the US Representative for Texas’s 2nd congressional district. He lost his right eye during his third deployment in Afghanistan in 2012.

What is Dan Crenshaw Famous For?

Where was Dan Crenshaw born?

Dan Crenshaw was born on 14 March 1984. His birth name is Daniel Reed Crenshaw. He was born to American parents in Aberdeen, Scotland. He holds American nationality. His zodiac sign is Pisces. He belongs to White ethnicity.

He graduated from Colegio, Nueva Granada high school in Bogota, Colombia in June 2002. After high school, he attended Tufts University. He graduated from Tufts in 2006. He later earned a Master of Public Administration from Harvard University’s Kennedy School of Government in September 2017.

He then worked as a military legislative assistant for Congressman Pete Session.

He joined the Naval Reserve Officers Training Corps while at Tufts.

After his graduation, he was commissioned in the US Navy.

He served in the Navy SEALs for ten years, including five tours of duty.

His first deployment was to Fallujah, Iraq.

How Did Dan Crenshaw Lose his eye?

He lost his right eye during his third deployment in the Helmand Province of Afghanistan in 2012. He was injured by the detonation of an improvised explosive device. He underwent surgery to save the vision in his left eye.

He served his fourth and fifth tours of duty in Bahrain and South Korea.

He earned two Bronze Star Medals, the Purple Heart, and the Navy and Marine Corps Commendation Medal with valor.

He medically retired from military service in 2016 as a Lieutenant Commander.

He ran for the US House of Representatives in Texas’s 2nd congressional district in 2017.

He advanced to runoff election along with Kevin Roberts.

He advanced to the general election defeating Kevin Roberts with 69.8% votes.

Crenshaw defeated Democrat Todd Litton in the general election in November 2017 with 52.8% votes.

He defended Trump’s proposal to build a border wall on the Southern border.

He opposes a ban on assault weapons.

He described the Paris Agreement as “costly and meaningless”.

He voiced opposition to the For the People Act of 2019.

He co-sponsored a bill to permanently authorize the September 11th Victim Compensation Fund Act in May 2019.

Who is Dan Crenshaw Married to?

Dan Crenshaw is a married man. He is married to Tara Blake. They got married in 2013.

What are Dan Crenshaw Body Measurements?

Dan Crenshaw stands at a height of 1.73 m i.e. 5 feet and 8 inches tall. He has dark brown eyes. He has a body weight of 68 kg. He has an average body build. He lost his right eye during his military service as a Navy SEAL. He used an eye patch to cover his right eye injury.

What is Dan Crenshaw Net Worth?

Dan Crenshaw is a public servant, serving as the US Representative for Texas’s 2nd congressional district. His net worth will be updated soon.

Our contents are created by fans, if you have any problems of Dan Crenshaw Net Worth, Salary, Relationship Status, Married Date, Age, Height, Ethnicity, Nationality, Weight, mail us at [email protected]