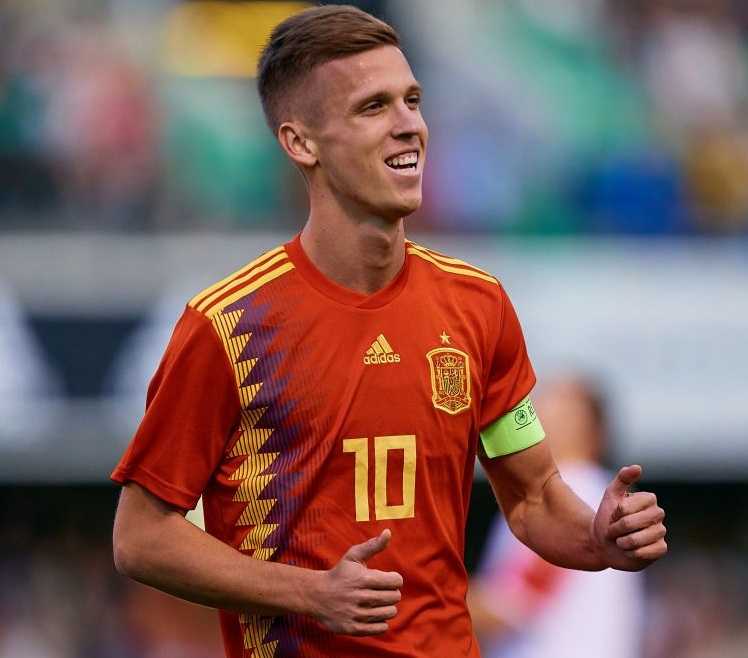 Daniel Olmo Carvajal, professionally known as Dani Olmo is a Spanish football player. He plays as an attacking midfielder or winger. He started his football career from the Croatian club, Dinamo Zagreb. He currently plays for the German club, RB Leipzig. He has represented Spain at different age levels. He made his international debut for Spain’s national team in 2019.

He has over 113k followers on his

What is Dani Olmo Famous For?

Where was Dani Olmo Born?

Dani Olmo was born on 7 May 1998. His birth name is Daniel Olmo Carvajal. His birth place is in Terrassa, Barcelona, Catalonia in Spain. He holds Spanish nationality. He was born to a father, Miquel Olmo. He has an older brother, Carlos. Information about his mother will be updated soon.

Olmo joined the youth system of Espanyol in 2006.

A year later, he joined the youth academy in 2007.

He was 9 years old when he joined the Barcelona youth academy.

He made his first-team debut against NK Lokomotiva in February 2015.

He signed a 4-year contract with the club in August 2016.

For his outstanding performance, he was named the Croatian First Football League best player in 2018.

Following the end of the 2018-19 season, he was named the 2018-19 Croatian First Football League best player and a best young player.

He made his Champions League debut against Atalanta in September 2019.

He scored his debut Champions League goal against Shakhtar Donetsk in October 2019.

He ended his spell at the club with 34 goals in 124 appearances in all competitions.

While in Dinamo Zagreb, the club’s director tried to get Olmo Croatian citizenship. Olmo also desired to switch to Croatia. However, it did not succeed.

Olmo made debut for the Spain U21 team.

He was a part of the Spain U21 team that won the 2019 UEFA European U21 Championship.

Olmo made his senior international debut against Malta in the Euro 2020 qualifiers.

He scored his debut international goal in the same match.

UEFA European Under-21 Championship Team of the Tournament: 2019

UEFA European Under-21 Championship Final Man of the Match: 2019

How tall is Dani Olmo?

Dani Olmo stands at a height of 1.79 m i.e. 5 feet and 10 inches tall. He has an athletic body build. His other body measurements will be updated soon.

What is Dani Olmo Net Worth?

Dani Olmo earns from his professional football career. His income comes from salaries, contracts, bonuses, and endorsements. His salary and net worth will be updated soon.

Our contents are created by fans, if you have any problems of Dani Olmo Net Worth, Salary, Relationship Status, Married Date, Age, Height, Ethnicity, Nationality, Weight, mail us at [email protected]