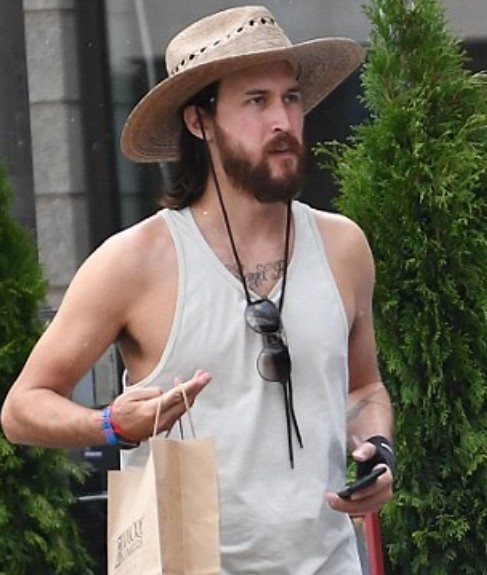 Danny Fujikawa, born Daniel Conor Fujikawa is an American actor, musician, and record producer. Fujikawa is best known as the boyfriend of American actress, Kate Hudson. He gained attention after he started dating Hudson in 2016. The couple has a daughter together. Besides his personal life, he is the former lead singer and guitarist of the now-disbanded L.A. based folk-rock band, Chief. He is also the founder of the record company, Lightwave Records, founded in 2013.

He has over 33k followers on his

What is Danny Fujikawa Famous For?

Where is Danny Fujikawa From?

Danny Fujikawa was born on 10 June 1986. His birth name is Daniel Conor Fujikawa. His birth place is in Los Angeles, California in the United States. He holds an American nationality. He was born to a father, Ron Fujikawa, and mother,  Melissa Linehan. He has 2 brothers, Michael, and Brady. Fujikawa has Japanese ancestry and he belongs to Asian ethnicity. He has Irish, English, Scottish, Danish, German, and Dutch ancestry on his mother’s side. His zodiac sign is Gemini. His paternal grandparents are Yoshihiko Fred Fujikawa and Alice Mae Aoki. His maternal grandparents are Anthony Paul Linehan and Evelyn Bott.

Regarding his educational background, Fujikawa attended New York University, where he studied music. However, he dropped out of university in 2005 without graduating.

Who is Danny Fujikawa Dating?

Danny Fujikawa is unmarried. However, he is not single. He has been dating American actress Kate Hudson since 2016. They have known each other for a long time and they first met via Hudson’s best friends, Sara Foster, and Erin Foster. Sara and Erin are Fujikawa’s stepsisters. The couple had their first date in December 2016 and made their first public appearance in May 2017. The couple welcomed their first child, a daughter, Rani Rose Hudson Fujikawa on 2  October 2018. Their daughter was named after her grandfather, Ron Fujikawa. Hudson has 2 children, a son, and a daughter from her previous relationships.

How Tall is Danny Fujikawa?

What is Danny Fujikawa Net Worth?

Danny Fujikawa is a former band member of the former band Chief. Best known as the boyfriend of American actress Kate Hudson, he earned from his music career. His current source of income is not available at present. He is focused on his family. His net worth will be updated soon.

Our contents are created by fans, if you have any problems of Danny Fujikawa Net Worth, Salary, Relationship Status, Married Date, Age, Height, Ethnicity, Nationality, Weight, mail us at [email protected]