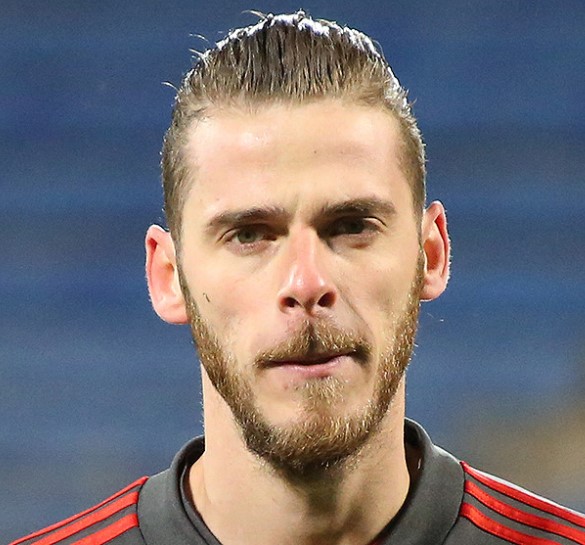 David De Gea is a Spanish professional football player who plays for Manchester United and Spain National Team as a goalkeeper. He is best known as one of the best goalkeepers in the world.

He started his football career from Atletico Madrid in Spain and currently he is playing for Manchester United. His efforts helped Atletico Madrid to win the UEFA Europa League and UEFA Super Cup in 2010. He was the 20th person on the list of Ballon d’Or in 2017. He won the Premier League Golden Glove in the -18 season. He became the Match of the Day Save of the season for 5 seasons from 2012-2016 and 2017-18. As of July 2020, he appeared in 517 matches during his career.

Since he joined Manchester United he played more than 300 matches and won a Premier League title, three community shield, and UEFA Europa League.

What is David De Gea Famous for?

A Spanish living legend professional footballer David De Gea was born on November 7, 1990, in Madrid, Spain. His birth name is David De Gea Quintana. He was raised nearby Illescas. He is a citizen of Spain and holds Spanish Nationality. Well, there is no information available about his education. His father’s name is Jose De Gea who was a former football player and his mother’s name is Marivi Quintana who is a housewife. He is the only son of his parents.

He is of European white Ethnicity and he is Christian by his religion. His zodiac sign is Scorpio and he is well known as Sticky Gloves as his nickname. There is no information about his education as of now.

As being the best goalkeeper of the world he has gathered lots of fan followers in his social media accounts.

He came to the football profession because of his constant encouragement from his mother and as his father was a former player he equipped all his disposal for him to train and due to the facilities and equipment he was successful in his academics and football. He joined Spanish club Atletico Madrid at the age of 13 and he played for B Division games for Atletico Madrid. He has a good experience as he played various positions, midfield, defense, and attacking until he settled for goalkeeping at the age of 14.

He signed his first professional contract in 2008 at the age of 17 for 3 years.

He rejected the transfer loan to Queens Park Rangers and pushed himself to train. He appeared in 35 games in 2008-09 season for Atletico Madrid B. He was promoted to train with the first team when Atletico manager Abel Resino noticed him and invited him to train.

He made his debut for Atletico Madrid’s senior team at the age of 18 on 30 September 2009, coming on in as a substitute after Roberto was injured after 27 minutes and they lost by 2 goals against Porto. He was given a chance to make La Liga debut three days later after the injury of Roberto at the home ground to Real Zaragoza. He signed a new contract which would keep him with Atletico Madrid until 2013. He finished his 2009-10 season as the number one goalkeeper. He won two Man of the Match awards in that season. His efforts made his club to win the season’s UEFA Super Cup in 2010. During the season of 2010-11, he appeared in 57 matches.

The news was that Manchester United goalkeeper Edwin Van der Sar is going to retire and David Da Gea will replace Van der Sar. Finally, on 27 June 2010, he underwent a medical with United and made him a contract offer and the transfer was confirmed on 29 June for a British record fee of £18.9M.

David made his debut for Manchester United in a friendly game with Chicago Fire on 23 July 2011 where they won by 3-1. He made his competitive debut against Manchester City in the community shield on 7 August and they won by 3-2. He made his Premier League debut against West Bromwich Albion a week later and won by 2-1. With his appearance, United won the game with Tottenham Hotspur and he saved a penalty shootout from Robin Van Persie and won a victory against Arsenal. In the season of 2011-12, he appeared 29 games in Premier League and 8 games in Champions League and 1 game for FA Community Shield.

David missed his Manchester United’s pre-season tour because of his 2012 Olympics Game Involvement. As he returned from his Olympic game he played for Everton but lost even after his great save from him but win aginst Fulham by 2-1. He was praised by his manager Sir Alex on saving several balls against Real Madrid and made a draw of 1-1 and honored by “Excellent” performances. He was voted for into the Premier League Team of the Year in 2012 and won the first Premier League winner’s medal with United. He appeared in 28 games and kept 11 clean sheets and the top of the Premier League by 11 points. He also appeared in 7 games of the UEFA Champions League and for National Cup games.

He started his 2013-14 season with a clean sheet win over Wigan at Wembley Stadium. On December 1, 2013, David made his 100th appearance for Manchester United and made a draw of 2-2 against Tottenham. De Gea’s performances throughout the season saw him named as both the club’s Players’ Player of the Year and Fans’ Player of the Year. He appeared in all of 37 games Premier League and 10 games in the UEFA Champions League.

In the season of 2015-16, his transfer to Real Madrid in £29 million was collapsed due to paperwork not being submitted before the transfer window in Spain closed. On September 11, 2015, David De Gae signed a new four-year contract deal with Manchester United with an option of a one-year extension. In May 2016, David became the first player ever to win Manchester United’s Player of the Year for a third consecutive season. He also won BBC Match of the Day and Save of the season for the third consecutive year against Watford on 21 November 2016. He appeared in 34 games for Manchester United in Premier League and 6 games for UEFA Champions League and 2 UEFA Europa League.

Jose Mourinho became the new manager of Manchester United and his first appearance was within the FA Community Shield against Leicester City and won by 2-1. On 20 April  2017, he was selected as a goalkeeper in the PFA Team of the Year for the fourth time in his career.

The EPL game against Everton on 17 September 2017 and the fifth match of the Premier League was his clean sheet of the season and 100th overall for Manchester United. He was selected as a goalkeeper in the PFA Team of the Year for the fifth time on April 18, 2018. After the game against West Ham, he earned his 18th clean sheet of the season and also secured his first Premier League Golden Glove since he joined Manchester United in 2011. He played 37 games for EPL and 6 games in UEFA Champions League.

The 2018–19 season began with De Gea keeping just five clean sheets in his first 25 appearances. His clean sheet against Liverpool on 24 February was his 100th for Manchester United in the premier league. He reached him to make the seventh goalkeeper reach that milestone for a single club in the competition and the second for Manchester United after Peter Schmeichel. He appeared in 38 games in EPL with just 7 clean sheets.

He started his 2019-20 season against Chelsea on 11 August 2019 with a clean sheet of the season and in a victory of 4-0. He was offered a new contract on 3 July 2019 and was ongoing the negotiation and finally on 16 September, 2019, Manchester United confirmed that David had signed a four-year contract renewal keep him at the club until at least June 2023. After the renewal of his contract, he played against Tottenham. He played a tremendous season and became the best goalkeeper in the world and will be England’s and United’s Number 1 as he was the first choice of Manager Ole Gunnar. He played 33 games in EPL and a game in the UEFA Champions League.

He made his first senior international debut against El Salvador on 8 June 2014 and won by 2-0.

He was named by Senior Squad manager Vicente del Bosque in a provisional 30 man squad for the 2010 FIFA World Cup but unfortunately, he couldn’t make the final cut. He played for the senior team for two matches against Serbia and PR China.

He played for the 2014 World Cup in a senior squad and he played the whole 90 minutes of the game for Spain on September 4,  2014, against France in a friendly match and lost by 1-0. He also played UEFA Euro 2016 qualifying games. He played against Turkey, Croatia, and Italy. He played for Spain in the 2018 FIFA World Cup in Russia and played against Portugal and finished a draw of 3-3. As of 2020, he played 41 games for the National team Spain.

Who is David De Gea Married to?

David is tall and handsome and he is straight to his sexual orientation. He is married to her long-relationship girlfriend Edurne Garcia who is a famous Spanish singer, an actress, and a TV presenter. She is 5 years older than him. And the Spanish goalkeeper David loves to spend time with his wife Edurne.

How tall is David De Gae?

What is the net worth of David De Gea?

He is a professional football player who has played for Atletico Madrid and currently playing for English Premier League Manchester United and played several National and International games for Spain. He wears No. 1 as his Jersey Number. His primary income source is from his football career. He receives an annual salary of $21 million and his endorsement deals with Adidas, Pepsi Max and EA Sports made him gather more fortune of him. His estimated net worth as of 2020 is approx. $17 million.

Our contents are created by fans, if you have any problems of David De Gea Net Worth, Salary, Relationship Status, Married Date, Age, Height, Ethnicity, Nationality, Weight, mail us at [email protected]