David Andrew Warner, professionally known as David Warner is an Australian international cricket player. He is the former captain of the Australian national team in limited-overs cricket. 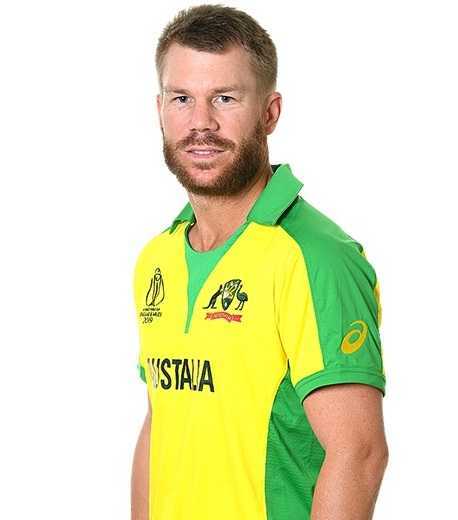 David Andrew Warner, professionally known as David Warner is an Australian international cricket player. He is the former captain of the Australian national team in limited-overs cricket. He served as the Australian vice-captain across Test and ODI formats of the game between 2015 and 2018. He is a left-handed batsman. He is also a part-time spin bowler. He is the first Australian cricketer in 132 years to be selected for a national team in any format without experience in first-class cricket. He plays for New South Wales and the Sydney Thunder in domestic cricket. According to the official ICC Player Rankings published in February 2019, he is currently ranked 6th in the list of top Test batsmen in the world. For his involvement in the ball-tampering incident by an Australian team in the third match of their Test series against South Africa in March 2018, he was banned from all international and domestic cricket in Australia for one year. He was also banned from any leadership positions permanently. He returned to international cricket in 2019.

What is David Warner Famous For?

– The first Australian cricketer in 132 years to be selected for a national team in any format without experience in first-class cricket.

– Involvement in ball Tampering Incident by an Australian team in the third match of their Test series against South Africa.

Where was David Warner Born?

David Warner was born on 27 October 1986. His birth name is David Andrew Warner. His birthplace is in Paddington, Sydney, New South Wales in Australia. He holds Australian nationality.

He broke the under 16’s run-scoring record for the Sydney Coastal Cricket Club.

He made his first-grade debut for the Eastern Suburbs club at the age of 15.

He toured Sri Lanka with the Australian U19 and earned a rookie contract with the state team.

He hit his first Domestic One Day century for New South Wales with a score of 165* against Tasmania in November 2008. He made the record of the highest one day score by a Blues player.

He made his first-class debut playing for New South Wales against Western Australia in the final match of the 2008-09 Sheffield Shield competition in March 2009.

He broke the record for the highest Australia one-day domestic score scoring 197 off 141 balls including 20 fours and 10 sixes.

He became the captain for the Sydney Thunder in the first season of the newly revamped Big Bash League.

He has played for English County Champions Durham for the English cricket domestic season.

He has represented Sunrisers Hyderabad in the IPL.

He holds the records for the most runs by an overseas player with 4706 runs, most half-centuries 44, and the highest individual score by a captain 126 runs.

He has also won the Orange Cap three times, more than any other player.

He became the first cricketer to score consecutive Twenty20 hundred in October 2011, when he scored unbeaten 135 and unbeaten 123 in consecutive matches in the Champions League.

Sunrisers Hyderabad signed him for the 2014 IPL and appointed him captain.

He ended the 2014 season as the tournament’s leading run-scorer.

He captained the Sunrisers for the 2016 IPL season. He led the team to its first championship defeating Royal Challengers Banglore in the final.

He ended the 2016 season as the second-highest run-scorer.

He finished the 2017 IPL season as the leading run-scorer.

Due to a ball-tampering case in South Africa, he was banned from playing cricket for a year.

He returned to Sunrisers Hyderabad for the 2019 IPL season. He finished the season as the leading run-scorer with 692 runs.

He signed with Sylhet Sixers for the 2019 edition of the Bangladesh Premier League.

He was drafted to play for the Winnipeg Hawks in the players’ draft for the inaugural edition of the Global T20 Canada tournament.

Warner made his international debut for Australia in a Twenty20 international against South Africa in January 2009. He was the first man since 1877 to represent Australia without having played in a first-class match.

He made his Test debut in December 2011 against New Zealand.

He scored his first Test century in December 2011 against New Zealand.

He scored his highest scores in ODIs against Afghanistan during the 2015 ICC World Cup. He scored 178 runs off 133 balls.

He became the fourth player to win the Allan Border Medal more than once and also win the award in consecutive years in 2017.

He became the first batsman for Australia and the 8th batsman overall to score a century in his 100th ODI in September 2017.

He is the first Australian to score 7 ODI centuries in a calendar year.

Warner and Shane Watson have been the most successful opening pair in T20I history.

He is the first Australian and sixth overall to reach 1,500 T20I runs.

He is the first batsman to score three centuries at The WACA.

He became only the third batsman in the history of Test cricket to score centuries in both innings of a Test match thrice in November 2015.

He scored his first Test double century at The WACA Perth against New Zealand in November 2015. He also became the second opener in Test cricket history to score three consecutive Test hundreds twice.

He became only the fifth cricketer to score a century before lunch on the first day of a Test match in January 2017.

He became the sixth Australian player to score back-to-back test hundreds in Asia in September 2017 while playing against Bangladesh.

For his involvement in the ball-tampering incident by the Australian team in the third match of their Test series against South Africa in March 2018, he was banned from all international and domestic cricket in Australia for one year. He was also banned from any leadership positions permanently.

He returned to international cricket in 2019.

Australian Test Player of the Year: 2016

Bradman Young Cricketer of the Year: 2012

Who is David Warner Married to?

David Warner is a married man. He is married to Australian ironwoman Candice Falzon. The couple got married in April 2015. They have two daughters. In 2016, he was named Australian Sports Dad of the Year. He lives with his family in Sydney.

What are David Warner Body Measurements?

What is David Warner Net Worth?

David Warner earns from playing professional cricket. He has played in several T20 franchise leagues in the world. His income comes from salary, prize money, bonuses, and endorsements. As of 2019, his net worth is estimated at $10 million.

Our contents are created by fans, if you have any problems of David Warner Net Worth, Salary, Relationship Status, Married Date, Age, Height, Ethnicity, Nationality, Weight, mail us at [email protected]