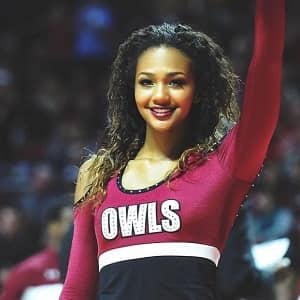 Deja Lighty is popularly recognized as the girlfriend of Donovan Mitchell. Her boyfriend is an American basketball player who plays for the Utah Jazz of the NBA.

She was born as the daughter of parents Veronica and Chris Lighty. Her father passed away aged 44, on 30th August 2012. According to various sources, Ms. Lighty’s father Chris Lighty committed suicide following an intense argument with his ex-wife.

Talking about her education, she went to Montclair Kimberly academy which is located across the Hudson River, Northern new jersey. She studied sports management at Temple University where she was a cheerleader.

How did Deja Lighty pursue her career?

Deja is an account executive for the Cleveland Cavaliers. Previously, she was a cheerleader and was a recruitment ambassador for the football team at Temple. At the same time, she was an intern at Roc Nation in 2017.

She served as public relations manager for Temple University’s Love Your Melon, the Apparel brand run by college students that give hats to every child battling cancer. In addition to all things Deja worked out in college, she managed to be a basketball recruiter for the Temple Men’s basketball team.

More about her boyfriend Donovan Mitchell

Donovan Mitchell is an American basketball player who plays in the National Basketball Association (NBA). He currently plays for the Utah Jazz as their shooting guard. He was drafted by Denver Nuggets with the 13th overall pick in the 2017 NBA draft. On 5th July 2017, Mitchell signed a four-year contract for the Jazz rookie scale.

Likewise, he also signed a multi-year shoe deal with Adidas on 11th July 2017. On  30th January, Donovan was named an All-Star for the first time in his career, being selected as a Western Conference reserve.

Deja Lighty is currently in relation with famous American basketball player Donovan Mitchell. He is one of the members of Utah Jazz in salt lake city. Although they are in a long-distance relationship, they have a strong bond with each other. Furthermore, we might get the chance to witness the couple’s wedding. They are very close to each other and seem to be very happy.

There is no information about her previous affairs, relationships, etc.

What is the Net worth of Deja Lighty?

She used to be the team manager for the boy,s basketball team at her highschool Montclair Kimberly Academy. For organizational business development, she recently accepted a job as an Account Executive with the Cleveland Cavaliers. She was also an intern at  RocNation which is a sports entertainment agency. However, the net worth of Deja Lighty is under review. Her boyfriend has an estimated net worth of around $20 million.

Our contents are created by fans, if you have any problems of Deja Lighty Net Worth, Salary, Relationship Status, Married Date, Age, Height, Ethnicity, Nationality, Weight, mail us at [email protected]