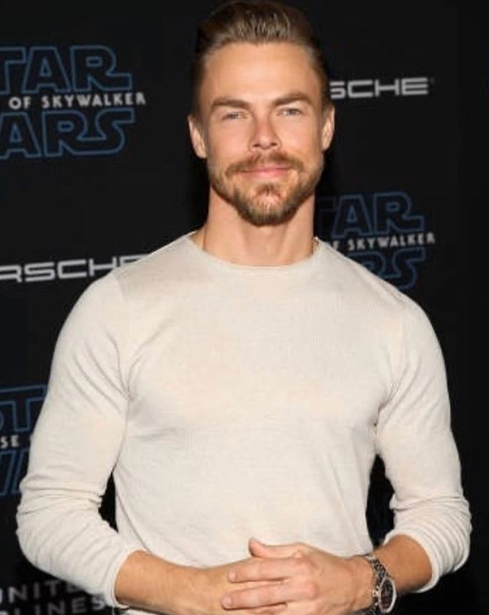 Derek Hough is an American professional Latin and ballroom dancer, choreographer, actor, author, and singer. He is best known for his appearance in ABC network’s reality dance series ‘Dancing with the Stars’, from 2007 to 2016 during which he became a multi-time winner of the show. He has won a record-breaking of six seasons where he got a total of nine nominations out of which won two Primetime Emmy Awards for Outstanding Choreography for several routines that he choreographed for the show. Hough is also the winner of the WDSF World Latin Championship in 2002, Blackpool U-21 Latin title in 2003 and LA Outstanding Dancer of the Year and New York Dance Alliance Outstanding Dance awards.

What is Derek Hough famous for?

Hough is best known for his work on the ABC dance competition series, Dancing with the Stars, on which he has won a record-breaking of six seasons where he got total of nine nominations out of which won two Primetime Emmy Awards for Outstanding Choreography for several routines that he choreographed for the show.

Who are Derek Hough parents?

He is the son of Mari Anne Hough and Bruce Robert Hough, who was twice chairman of the Utah Republican Party. He was born on May 17, 1985, in Salt Lake City, Utah, U.S. He has four sisters, Sharee, Marabeth, Katherine, and Julianne Hough. When Hough was 12, his divorcing parents sent him to London to live and study with dance coaches Corky and Shirley Ballas. His sister Julianne would also join him after some months. Hough remained in London for ten years. The coaches schooled Hough along with their children at the Italia Conti Academy of Theatre Arts where they received training in song, theater, gymnastics, and many forms of dance, including jazz, ballet, and tap.

The three children formed their pop music trio 2B1G (“2 Boys, 1 Girl”) and performed at dance competitions in the UK and the U.S., and showcased UK television shows. Also, Hough learned to play the piano, guitar, and drums. He graduated from Italia Conti Academy of Performing Arts in Goswell Rd, London. He is an American by nationality and belongs to White ethnicity. His religion is Christianity, and his zodiac is Taurus.

How is Derek Hough’s career?

Derek first embarked on his acting career from the 2001 movie, ‘Harry Potter and the Philosopher’s Stone.’ He worked in another couple of movies that include, Rock of Ages(2012) and Make Your Move 3D(2013). He began his dancing career at the age of 22 with the appearance of BBC One’s TV show DanceX in 2007. He then joined the fourth season of ABC show, Dancing with the Stars in 2007 pairing up with Jennie Garth, an actress. Hough and Garth made it to semi-finals finishing in fourth place. During his time in DWTS up to 2016, he won a record-holding six seasons with a total of nine nominations, he won two Primetime Emmy Awards for Outstanding Choreography and other various awards in other categories.

Furthermore, Hough has also starred in various stage productions, including the 2006 production of Footloose: The Musical at the Novello Theatre in London’s West End, as well as the 2015 New York Spring Spectacular at Radio City Music Hall in New York City. In 2013, he starred in Making Your Move, a South Korean-American independent dance film. Also until 2014, he held a recurring acting role on ABC’s musical-drama, Nashville. On December 7, 2016, Hough played the role of Corny Collins in NBC’s live musical TV-production, Hairspray Live!. In May 2017, Hough joined the judge’s table in NBC’s new dance competition series World of Dance. He reprised his role as a judge for the second and third seasons as well. In September 2019 Hough hosted an NBC special Return to Downton Abbey: A Grand Event.

Who is Derek Hough’s wife?

Derek Hough is not married yet. He is currently dating a fellow DWTS dancer, Hayley Erbert since 2015. His girlfriend Hayley is also a professional dancer known as one of the top finishers in the 10th season of the popular dance competition, So You Think You Can Dance. Also, Hayley has appeared on the show, A Night To Remeber. Before Hayley, Hough is reported to have dated several other girls as well. He has dated British actress, India de Beaufort (2000 to 2008), Shannon Elizabeth(2008 to 2009),

What is Derek Hough’s net worth?

The DWTS star, Derek Hough has accumulated an estimated net worth of $4 million as of 2019 and his average salary is roughly $50,000. He has earned this huge sum from his professional dancing and acting career. He is the multi-time winner of reality TV series, Dancing with the Stars from 2007 to 2016. He has also added in his worth from other TV shows, Entertainment Tonight from 2007 to 2018. Similarly, he is also an actor who played in the 2001 blockbuster movie, ‘Harry Potter and the Philosopher’s Stone’ and the box office of $974.8 million warner bros movie Pictures flick. He is also an author who has written best selling books in Amazon. Furthermore, Derek owns a 3,358 square feet development property in Sherman Oaks worth $1.795 million. He reportedly sold his Studio City house for $1.85 million in late 2014.

What age is Derek Hough?

The two Primetime Emmy Awards winner, Derek Hough is 34 years old as of 2019. Hough stands at a decent height of 5 feet 10 inches. As he is a very beautiful dancer he has a very athletic and slim body type so he has a balanced body weight of 76 kg. He looks young with a charming smile on his face. He has blue eyes and blonde hair color. Furthermore, Hough has a body measurement of 42-32-14.5(chest-waist-biceps) inches. Similarly, he walks on a shoe size of 10(US). His dress size is currently not known. He has a straight sexual orientation.

Our contents are created by fans, if you have any problems of Derek Hough Net Worth, Salary, Relationship Status, Married Date, Age, Height, Ethnicity, Nationality, Weight, mail us at [email protected]