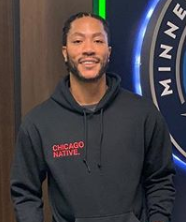 The basketball superstar, Derrick Rose who became the youngest player to clinch the National Basketball Association’s most valuable player title in 2011 at the age of 22 has accumulated enormous earnings from his playing career that has spanned over a decade. He has been associated with many teams in the National Basketball Association and through his massive earnings, he made the Forbes list of The World’s Highest-Paid athletes in 2017 as he clinched the no. 22 spot. Let’s know more about him through this article.

What is Derrick Rose famous for?

An American professional basketball player. He is best known as a player of New York Knicks wearing a jersey number 25. He was honored as the NBA Most Valuable Player in 2011.

Where is Derrick Rose born?

Recalling her early life, Derrick Rose was born in Chicago, Illinois in the year 1988. Currently, he is 31 years old. He is of African-American ethnicity and has American nationality. He was born as the youngest son of Brenda Rose and has three elder siblings; Dwayne, Reggie, and Allan. His father’s name is yet to be disclosed.

Where is Derrick Rose go for education?

Concerning her education details, Derrick studied at Simeon Career Academy where he has won a Parade All-American national award. After graduating high school he attended the University of Memphis. He played a year of college basketball for Memphis Tigers before being drafted.

When did Derrick Rose begin his sports career?

Derrick began his professional basketball career after being drafted by the Chicago Bulls in the 2008 NBA draft. In his playoff debut against the defending champion Boston Celtics, he had 36 points, 11 assists, and four rebounds.

According to an ESPN article from January 2010, he has the league’s fourth best-selling jersey. On January 17, 2011, he posted his first career triple-double, scoring 22 points, 10 rebounds, and 12 assists in a win over the Memphis Grizzlies. He and Michael Jordan are the only players in Chicago Bulls history to win the NBA Most Valuable Player award.

He signed a five-year, $94.8 million contract extension with the Bulls in December 2011. During his time with the Bulls, he has sustained many injuries from which he has healed admirably.

He was traded to the New York Knicks on June 22, 2016, along with Justin Holiday, for Jose Calderon, Jerian Grant, and Robin Lopez.

Since then, he has been a member of the New York Knicks and continues to do so. He was also a member of the United States men’s national basketball team, which won gold medals at the FIBA World Cup in 2010 and 2014.

He signed with the Cleveland Cavaliers on July 25, 2017. He scored 14 points in the Cavaliers’ 102-99 victory over the Boston Celtics in his first game with the team. On November 24th, 2017, he left the team to reconsider his NBA future. He began to doubt his ability to continue playing as his dissatisfaction with injuries grew.

He signed with the Minnesota Timberwolves on March 8, 2018, reuniting with Tom Thibodeau, Jimmy Butler, and Taj Gibson. Rose scored 14.2 points in 23.8 minutes per game in the playoffs, as the Timberwolves were defeated 4-1 by the Houston Rockets in the first round.

What are the achievements of Derrick Rose?

Is Derrick Rose dating someone?

Reflecting on the personal life, Derrick was in a relationship with Mieka Reese. The couple has been blessed with a son Derrick Jr. on 09th October 2012 but due to some reason, their relationship couldn’t last for long. They started dating from 2007 but end up in 2013.

Previously, he was also in a relationship with Marisa Miller. He was once accused of raping his former girlfriend along with his two friends. On 19th October 2016, he was cleared by an eight-member jury and absolved of wrongdoing.

Presently, he is in a relationship with Alaina Anderson. The couple started dating from 2016 and has been living in a happy relationship to date.

How much is Derrick Rose’s worth?

Being a professional basketball player, Derrick earns an impressive amount of money and fame through his profession in the field of the sports industry. Based on some online reports, his estimated net worth said to be $85 million and his salary is somewhere $14 million at present.

How tall is Derrick Rose?

Observing his body statistics, Derrick stands a height of 6 feet 3 inches and weighs around 86 Kg. Similarly, he has a pair of dark brown eyes and black hair color. Further, his body measures 40-30-35 inches and his biceps size is 15 inches. He wears a 13 (US) size od shoes.

Our contents are created by fans, if you have any problems of Derrick Rose Net Worth, Salary, Relationship Status, Married Date, Age, Height, Ethnicity, Nationality, Weight, mail us at [email protected]