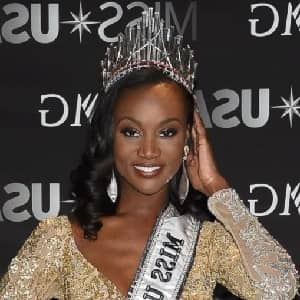 Deshauna Barber is a beauty pageant titleholder and a motivational speaker from America. She is commonly known for being crowned as Miss USA 2016 by outgoing titleholder Olivia Jordan of Oklahoma on June 5, 2016. Likewise, Deshauna also represented the United States at Miss Universe 2016 where she stood among the top nine finalists.

Where was Deshauna Barber born?

Deshauna Barber came to this world on December 6, 1989, in Columbus, Georgia to Darren Barber and Cordelia Barber, both military veterans. She is American by nationality and is currently 30 years old.

As the daughter of military veterans, she was a military brat herself. Talking about her’s parents’ background, her father served a 20-year military career in the Green Berets to North Carolina, Nebraska, Minnesota, Virginia, and Washington, D.C.

Details about her early life and educational background

Deshauna Barber joined the United States Army Reserve at an early age of 17. She later attended Virginia State University and graduated with a degree in business management.

Before becoming Miss USA, Barber was commissioned as a quartermaster officer and logistics commander for the U.S. Army Reserve as a Captain and worked as an IT analyst. Likewise, she earned her master’s degree from the University of Maryland University College in management information systems and services.

How is the professional life of Deshauna Barber?

Moving forward, she competed in the Miss USA 2016 pageant in Las Vegas, Nevada on June 5, 2016. Similarly, she won the competition, defeating first runner-up Chelsea Hardin of Hawaii and second runner-up Emanii Davis from Georgia. Then came the USA at Miss Universe 2016 in Manila where she represented the USA and placed in the top nine.

Moreover, she wore a superhero-inspired metallic silver costume complete with a helmet and an eagle-crested shield during the national costume competition. The dress symbolized women’s empowerment. Unfortunately, the wings of her costume couldn’t open when she was onstage, leaving her sheepishly smiling and tugging on the strings for a while.

What are her honors?

It was the date November 4, 2016, when Barber was named the godmother to the Carnival Vista, a vista-class cruise ship owned by Carnival Corporation & plc, during the ship’s christening in New York, NY. Moreover, the President of Carnival Cruise Lines even appraised Barber as Carnival Vista’s godmother, embodying the spirit of commitment and sacrifice to those who protect freedom each and every day.

How tall is Barber?

Deshauna Barber stands tall with a decent height of 5 feet 10 inches and weighs about only 55 kilograms. Similarly, she mentions wearing a bra size of 32B and a shoe size of 9 (US). Besides this, there is no other information concerning her body measurements. Moreover, she has black hair and a pair of beautiful black eyes that compliments her beauty even more.

How much net worth does Deshauna Barber hold?

Referring to the net worth and earning of Deshauna, she is a beauty pageant titleholder who has an estimated net worth of around $100,000 – $1M (USD). She has made a fortune out of her beauty pageant and US army career. However, there is no information regarding her official earnings from her profession. We are looking forward to reviewing her earnings and salary as of the year 2020.

Is Deshauna Barber in a relationship?

According to our records, the relationship status of Deshauna Barber is most probably single at the moment. She seems to be quite a secretive person as she is very careful about the information that she lays out in the media. Likewise, we have no records of past relationships for Deshauna Barber either.

Moreover, she has kept her distance to any sort of rumors or controversies, as she prefers keeping quite a clean profile for her professional career.

Our contents are created by fans, if you have any problems of Deshauna Barber Net Worth, Salary, Relationship Status, Married Date, Age, Height, Ethnicity, Nationality, Weight, mail us at [email protected]