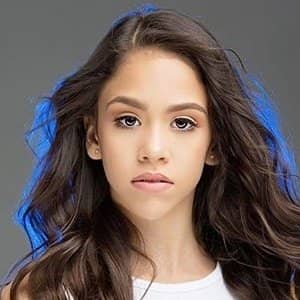 Diana Pombo is an eminent American Dancer. Additionally, she is also a dancer who gained recognition for practicing with the Stars Dance Studio in Miami, Florida. Likewise, she has also been part of NBC’s World of Dance and So You Think You Can Dance: The Next Generation, where she made it to The Academy.

Where is Diana Pombo from?

Diana Pombo was born on November 17, 2005, in Miami, Florida, the United States. She holds an American nationality and Caucasian ethnicity and is currently 15 years old.

Unfortunately, there is no information about Diana’s parents. She has one sibling, Andrea Pombo Ivana Green. Whereas, her sister has danced for the Stars Dance Studio. Likewise, Diana and her sister, Andrea also formed the Pombo Sisters dance group.

Talking about Diana’s education history, there is no information about her educational qualification.

How did Diana Pombo rise to stardom?

Diana Pombo is a young actor, dancer, and singer. She is good in multiple dance genres such as contemporary, ballet, jazz, and Hip Hop. Diana is popular as a dance prodigy.

She has also developed a style of her own as well. Additionally, she fuses contemporary ballet style with fluid movement and hip-hop jazz-funk. Likewise, at the age of 11, Diana began doing a lot of her own choreography. She conducted workshops all over the USA and internationally as well.

She has won multiple regional and national dance titles since she started competitive dancing at the age of 7.  Likewise, when she was 10 years old, Diana also won Mini Best Dancer at The Dance Awards. She also assisting faculty from Break The Floor Productions at Jump, 24/7, and Nuvo.

Likewise, she is also the youngest soloist to make it as a Finalist in the Junior Division in the hit TV show NBC’s World of Dance produced by Jennifer Lopez. Similarly, in 2016, Diana was on Fox So You Think You Can Dance The Next Generation in Contemporary Team Sasha.

In the year 2015, she was the youngest performer to be cast by Broadway and Cirque Dreams Director, Neil Goldberg in the live performance “We-The Passion & Rhythm of the People” at the Broward Center of Performing Arts. Likewise, she is the youngest soloist performer headlining and touring all over the USA and Canada with World of Dance Live events.

Additionally, Diana holds residences in both Miami and LA and is furthering her career in dancing as well as pursuing acting and singing. She has also been a featured dancer in Jlo’s music video “Amor, Amor, Amor”, in the 2018 Super Bowl commercial for NBC’s World of Dance Season 2, as well as for Sony’s Hotel Transylvania 3 promo.

Then, Pombo was the youngest solo Workshop instructor at the WOD DX Summer experience in 2018 in LA. Likewise, she has also been a featured solo performer for Youtube’s Vidcon Night of Dance.

Diana has headlined her self choreographed performances all over the USA and abroad and has performed as far as Mumbai, India alongside Bollywood renowned star Hrithik Roshan.

What is the Net Worth of Diana Pombo?

Diana’s net worth is not known.  But her main income source is through her dancing career.

Pombo has not been part of any rumors and controversies. Moreover, Diana has not involved herself in any controversies and rumors surrounding her.

How tall is Diana Pombo?

Is Diana Pombo dating anybody?

Diana Pombo is currently single. It seems to be more focused on her career, dance, song, and studies rather than being in a relationship. Additionally, she wants to keep her personal and love life private and away from the limelight and the social world.

Our contents are created by fans, if you have any problems of Diana Pombo Net Worth, Salary, Relationship Status, Married Date, Age, Height, Ethnicity, Nationality, Weight, mail us at [email protected]