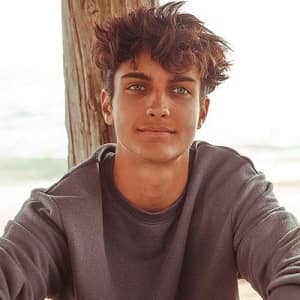 Dom Brack is a popular American Youtuber and social media personality. He is very popular on Tiktok and Youtube for his entertaining and hilarious content on both platforms.

Dom Brack, full name Dominic Brack was born on the 28th of July, 2003 in the U.S. As of now, his age is 17. His nationality is American and his ethnicity is Caucasian as he comes from English and German ancestry.

Dom was born to Andrew Brack (father) and Katy Brack (mother). His mom Katy is a painter. Dom grew up alongside his older sister Arianna and the two are really close to one another. As such, Arianna is frequently featured on his Instagram, Tiktok, and even on his Youtube videos.

Talking about his education, Dom is currently studying at Orange County High School of the Arts. At the same time, he is also learning acting through Margie Harbor Studios in LA. He had a passion for acting from a young age and actually started acting in theater from just age 10. Currently, he is planning to make a career out of acting

Dom has gained massive internet fame thanks to his Tiktok and Instagram accounts along with his Youtube channel. His Tiktok account @thedombrack has gathered over 2.4 million followers as of now.

His sense of humor, likable personality and good looks have all helped him gain an impressive number of followers on Tiktok. His videos on the platform are also well made and entertaining. And along with different types of content, he also collaborates with a lot of Tiktokers to keep his content fresh. Some creators he frequently collaborates with are Zachary Ryan, Ashley Wicka, and Soffi Dossi among many others.

Dominic’s self-titled Youtube channel also has over 751k subscribers as of now. He uploads a lot of pranks and challenges with really unique ideas on his Youtube channel.

He also features his friends Ben Azelart and Brent Rivera in a lot of his videos. Their appearances make the videos more interesting and Dom’s charm and cheerful personality always make the videos fun to watch. On top of all this, Dom is also a popular personality on Instagram with over 600k followers. He shares his modeling photos, personal life updates, and some of his Tiktoks on the account frequently.

As of now, Dom Brack has an estimated net worth in the range of 100k – 500k U.S. dollars. Dom has not revealed any details on his annual salary as of now.

Dom stands at a height of 5 feet 11 inches and his weight is roughly 65 kilograms. Along with good looks, he also has a slim and fit physique. His eyes are blue in color and his hair is dark brown.

Dom is most probably single at the moment. But we can’t for sure but judging by his activity on social media and his personal life updates, it seems like he isn’t dating anyone. But due to his privacy, we do not know anything about his past relationships and girlfriends.

Dom is active and popular on social media. He is active on Snapchat and Instagram at the moment and has already gathered over 700k followers on his Instagram account.

Our contents are created by fans, if you have any problems of Dom Brack Net Worth, Salary, Relationship Status, Married Date, Age, Height, Ethnicity, Nationality, Weight, mail us at [email protected]