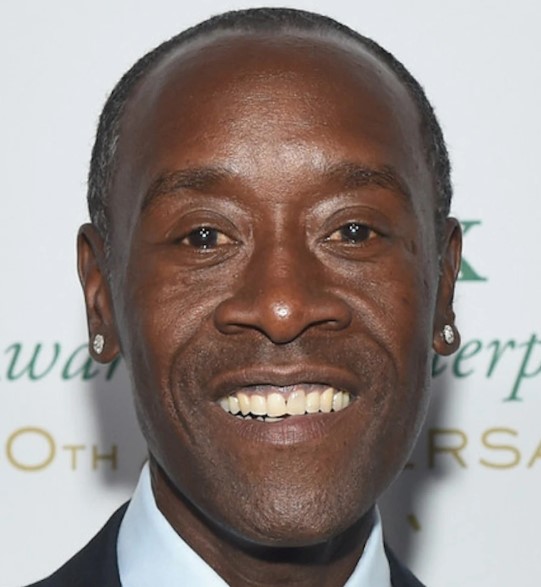 Don Cheadle is an American actor, author, director, producer and writer, who is best known for his performance as the lead role as Rwandan in the historical genocide drama film, “Hotel Rwanda”(2004) for which he even got nominated for an Academy Award for Best Actor.

Having started his professional career since 1985, Cheadle has undoubtedly managed to act in several movies including “Hamburger Hill”, “Colors”, “Rosewood”, “Blue Dress”, “Boogie Nights”. He also starred as Marty Kaan on the Showtime comedy series, “House of Lies” for which he won a Golden Globe Award in 2013.

Cheadle went on to earn global recognition with his role as the superhero War Machine in the Marvel Cinematic Universe as he already has appeared in the sequel of “Iron Man” and sequel of “Avengers”. Besides, Cheadle is quite active in social media sites with over 724k followers on his Instagram: @doncheadle and with over 845k followers on his Twitter account: @DonCheadle.

What is Don Cheadle Famous for?

Where was Don Cheadle Born?

Don Cheadle was born on November 29, 1964, in Kansas City, Missouri, United States. His birth name is Donald Frank Cheadle Jr. His nationality is American. Cheadle belongs to African-American ethnicity and is of Cameroonian descent as per DNA test while Saggitarius is his zodiac sign.

Don Cheadle was born in a well-to-do family to Bettye Cheadle(mother) and Donald Frank Cheadle Sr.(father). Her father, Donald Sr. is a clinical psychologist while his mother, Bettye is a teacher. He grew up along with his siblings: a sister, Cindy, and a brother, Colin. His family moved from city to city throughout his childhood. He began attending Hartley Elementary School in Lincoln, Nebraska, from 1970 which he continued for 4 years till 1974. Later, he got graduated in 1982 from East High School in Denver, Colorado.

Cheadle always had an interest in music as during high school, he played saxophone in the jazz band, sang in the choirs, and was active in the theater department, performing in musicals, plays, and mime shows. He also spent a year living in Bracknell, UK, where he attended Ranelagh School. Later, in 1986, Cheadle got graduated earning a Bachelor of Fine Arts(BFA) in Theater from the California Institute of the Arts.

In 2007, Cheadle was awarded the BET Humanitarian Award for his humanitarian work for the people of Darfur and Rwanda.

Don Cheadle is married to his long-term partner, Bridgid Coulter. Coulter is also an American actress and producer who is well known for her role in “Rosewood”(1997), “Westworld”(2016), and “Martin”(1992). The couple got married in 1992 and is blessed with 2 daughters named Ayana and Imani. Also, his family history was profiled on the PBS series, “African American Lives 2” in 2008.

Besides, in 2010, Cheadle was named U.N. Environment Program Goodwill Ambassador. He also has co-founded the “Not On Our Watch Project”, an organization focusing global attention. Cheadle also has co-authored two books together entitled “Not On Our Watch: The Mission to End Genocide in Darfur and Beyond” and “The Enough Moment: Fighting to End Africa’s Worst Human Rights Crimes”.

Don Cheadle has quite great earnings from his professional career as an actor and producer. Having been in this field for over 3 decades since 1985, Cheadle has managed to amass a healthy fortune from his several hit movies and series.

With his well-renowned role as War Machine in Marvel Movies and as Maurice Monroe in series, “Black Monday”, Cheadle has undoubtedly earned a worth enough for his living. His net worth is estimated to be around $35 million. Besides, Cheadle has appeared in NFL commercials promoting the Super Bowl from 2002 to 2005.

How Tall is Don Cheadle?

Don Cheadle is a handsome Black man in his 50s. With his charismatic acting and smile, Cheadle has won several hearts all around the world. He stands tall with a height of 5ft. 8inch.(1.73m) while his body weighs around 74kg(160 lbs). He has a dark complexion with black blad hair and brown eyes.

Our contents are created by fans, if you have any problems of Don Cheadle Net Worth, Salary, Relationship Status, Married Date, Age, Height, Ethnicity, Nationality, Weight, mail us at [email protected]