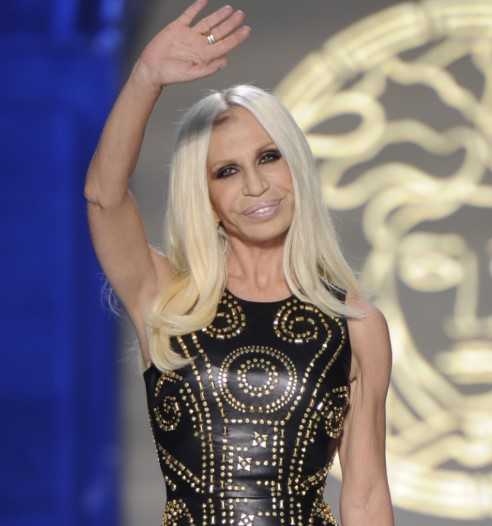 What is Donatella Versace Famous for?

Where was Donatella Versace Born?

Donatella Versace was born on May 2, 1955, in Reggio di Calabria, Italy. Her birth name is Donatella Francesca Versace. Versace belongs to Italian nationality and is of white ethnicity. Taurus is her zodiac sign.

Donatella Versace was born as the youngest child of the family to Antonio(father) and Francesca(mother). Her father was a salesman while her mother was a dressmaker. Born and raised among three elder siblings: Tina, Gianni, and Santo, Donatella spent her childhood learning many things from them. Her older sister, Tina, died at an early age of 12 due to tetanus infection.

Versace studied at her hometown and later got enrolled at Florence University to pursue her study in language. Versace began to have more interest in fashion as her late brother, Gianni Versace was a popular fashion designer.

She was also persuaded to dye her hair blonde at just 11 years old by Gianni. In addition, Santo Versace, her brother, is also a popular business tycoon.

Who was Donatella Versace Married to?

Donatella Versace was married to her former spouse, Paul Beck back in 1983. Beck is an American model with whom Versace shares two children: a daughter,  Allegra Versace Beck and a son Daniel Versace. Versace and Beck lived in their own lavish Milan apartment which had Versace printings all over the living room, along with their children.

Later, in 2000 the couple divorced and Versace lived a single life. She was previously married to Manuel Dallori. Further, Versace is a patron of the Elton John AIDS Foundation. She was also mentioned in Lauren Weisberger’s novel, “The Devil Wears Prada”.

What is the Net Worth of Donatella Versace?

The 64 years old, Donatella Versace has been one of the successful personalities in the fashion industry for a long time. Versace has quiet a great earning through her professional career as a designer and mainly as the CEO of”Versace”. Versace is a billion worth Italian fashion company started by her late brother, Gianni Versace who was assassinated in 1997.

Donatella inherited 20% of the company upon Gianni’s death and currently, she has a net worth around $1 billion. With her multiple fashion shows and several designs, she adds few more dollars to her fortune leading a luxurious and lavish lifestyle.

How Tall is Donatella Versace?

Donatella Versace is a beautiful white lady in her 60s. She has a fair complexion with her distinct blonde hair and light brown eyes. She stands tall with a height of 5ft. 5inch.(1.65cm). Her body weighs around 55kg.

Our contents are created by fans, if you have any problems of Donatella Versace Net Worth, Salary, Relationship Status, Married Date, Age, Height, Ethnicity, Nationality, Weight, mail us at [email protected]