Donny van de Beek is famous footballer from the national dutch team and ex- ajax club n now in Manchester United. n recently he has extended his contract with Manchester United n his future looking bright bt he didn't have too much time too play as he is seen most of his time on bench. 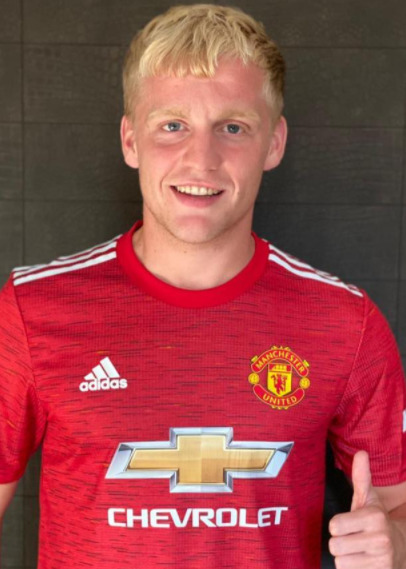 Donny van de Beek is a professional footballer. He is playing for his current team, Manchester United as a Midfielder position and for Netherlands national team as well. Initially, he joined Ajax’s youth academy in 2008 at the age of eleven, and later, he rose to fame after his career with the Eredivisie club Ajax, with whom he signed in the year 2015. He was named Ajax’s Talent of the Future in the year 2015. He also helped Netherlands’ U-17 squad earn a silver medal at the 2014 UEFA European Under-17 Championship. He finished as the runner-up in the 2017 UEFA Europa League and Eredivisie with Ajax. He made his debut for the Netherlands under-17 team against Germany on 11th September and made his senior international debut against Romania in a friendly match on 14th November 2017. Recently, he signed a five-year contract for a reported £35 million, plus £5 million in add-ons on 2nd September 2020 with the English Premier League club Manchester United.

Manchester United have completed the signing of the Ajax midfielder Donny van de Beek, paying €39 Million (£34.7 Million) plus a possible €5m in add-ons to secure the Netherlands international on a five-year contract. He was in the Ajax team beaten by United in the 2017 Europa League final, and last year reached the semi-final of the Champions League before being knocked out by Tottenham. He has made 10 appearances for the Netherlands, making his debut in 2017, and came on as a substitute in the final of last year’s Nations League. He said: “I cannot begin to explain how incredible an opportunity it is to join a club with such an amazing history. I would like to thank everyone at Ajax, I grew up there and will always have a special bond with the club, but now I am ready to take the next step in my career. I want to perform at the highest level and there is no higher standard than Manchester United”.

What is the Birthplace of Donny van de Beek?

On 18th April 1997, Donny van de Beek was born in Nijkerkerveen, the Netherlands. His nationality is Dutch and his ethnicity is Dutch-White. His race is White and Aries is his Zodiac sign. He was born to his parents; Andre (father) and Gerdina van de Beek (mother). His father is a supporter of Ajax and took Donny to their stadium at the age of five. He also has a sibling; a brother named Rody who plays for Veensche Boys. As of 2020, he celebrated his 23rd birthday.

For which team, Donny van de Beek is playing for?

Donny van de Beek is not a married man. He is still getting married. At present, he is not single but he is in a relationship. He is dating his beautiful girlfriend, Estelle Bergkamp who is Dennis Bergkamp’s daughter. The duo started dating in their teenage. The couple is leading a happy life at present without any disturbances. He is straight by sexual orientation and he is not gay.

What is the Net Worth of Donny van de Beek?

Donny van de Beek is a professional footballer who has made a huge amount of money from his career i.e Football career. His major source of earning is from a football career which includes contracts, bonuses, salary, and more. As of 2020, the net worth of Donny is estimated to have between 1 Million Euros to 10 Million Euros. Recently, he signed a contract with Manchester United that nets him a whopping salary of 7 Million Euros. As of today, he is living a luxurious lifestyle from his career earnings.

Donny van de Beek is a very charming and cool footballer with an athletic body build. He has got a tall height of 1.84 m with a balanced bodyweight of 74 Kg. His body build is athletic. His hair color is light blonde and his eye color is blue. He has no tattoo inked in his body.

Our contents are created by fans, if you have any problems of Donny van de Beek Net Worth, Salary, Relationship Status, Married Date, Age, Height, Ethnicity, Nationality, Weight, mail us at [email protected]