Dove Cameron is an American actress and singer. 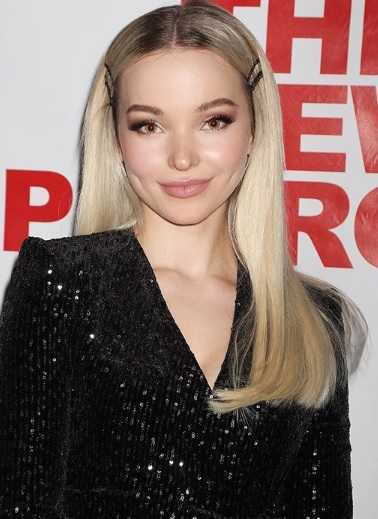 Dove Cameron is an American actress and singer better known for playing the roles of both title characters on the most popular Disney Channel television series Liv and Maddie since 2013. After several Disney series, she ended up with her television film Descendants which was a huge success. Her singing career started with YouTube covers. In 2013, under Walt Disney Records, Dove released Better in Stereo, which became Dove’s first hit. She is also one of the highly growing social media stars has over 21.9 million followers on her Instagram as of November 2018.

Dove was born in Seattle, Washington as Chloe Celeste Hosterman to parents Philip Alan Hosterman and Bonnie Wallace. Her parents later got divorced, and she has an older sister, Claire Hosterman.

Throughout her early life, she grew up in Bainbridge Island, Washington. In her childhood years, she started growing interested in singing and later dreamed of becoming a successful singer in the future.

She is of American nationality. Additionally, she belongs to a mixed ethnic background of Austrian, German, French, English, and Scottish.

Dove Cameron began acting at the age of 8. She was cast in a new Disney Channel Original Series entitled ‘Bits and Pieces’ as Alanna in 2012. However, shortly after filming the pilot, ‘Bits and Pieces’ was retooled into ‘Liv and Maddie’.

Additionally, on August 27, 2013, she released a cover of ‘On Top of the World’ by Imagine Dragons as a promotional single. Her cover peaked on the Billboard Kid Digital Songs chart at seventeen and spent three weeks on the chart. Her singles ‘Better In Stereo’ and ‘Count Me In’ was praised by lots of people.

Furthermore, Dove starred in the television film ‘Descendants’ which premiered on July 31, 2015. She and Ryan McCartan formed a band called ‘The Girl and the Dreamcatcher’ in 2015. In addition, on October 2, 2015, they released their first single, ‘Written in the Stars’ and released their second single, ‘Glowing in the Dark’, on January 29, 2016.

Dove has appeared in other several movies and television series including ‘Shameless’, ‘The Mentalist’, ‘Barely Lethal’, ‘Descendants: Wicked World’, ‘Agents of Shield’ and others.

Net Worth and Online Presence of Dove Cameron

Dove Cameron has been active in the field of acting since 2012 and has played a number of iconic roles in both movies and TV series. She has an estimated net worth of around $3 million. She is also Instagram star has a considerable fan following on her account. And she has also collected a hefty amount from the sponsored post.

She is quite active over social media. She has a huge number of followers on social networking sites such as Facebook, Twitter as well as Instagram. She has more than 1.45M followers on Twitter.

Dove Cameron began dating the actor and singer Ryan McCartan after getting together on 6th August 2013. The pair were engaged in April 2016. However, they separated later in October 2016.

Currently, she is dating Scottish Actor Thomas Doherty. She revealed that she and Doherty, who is located in London, keep making their relationship work regardless of the distance. The pair met on the set of ‘Descendants 2’.

Talking about her body measurement, Dove Cameron has a height of around 5 feet 2 inches. Additionally, she weighs 52 kg or 115 pounds. Her hair color is blonde and eye color is green. Furthermore, she has a body measurement of 34-24-33 inches and her bra size is 32B.In addition, her dress size is 4 (US) and shoe size is 6 (US).

Our contents are created by fans, if you have any problems of Dove Cameron Net Worth, Salary, Relationship Status, Married Date, Age, Height, Ethnicity, Nationality, Weight, mail us at [email protected]