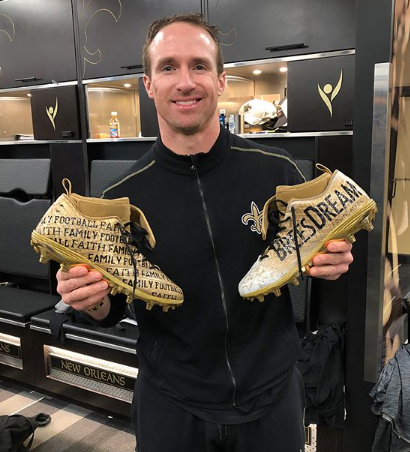 Drew Brees born Drew Christopher Brees is an American football player playing for New Orleans Saints and is one of the most decorated players in the game. He plays the quarterback position.

Currently, he became an all-time passing leader by making 71,940 yards during the game against the Washington Redskins. He has broken the record of Peyton Mannings.

Drew Bree was rumored to be replaced by Paxton Lynch in New Orleans Saints. Drew tweeted a controversial statement in June 2012, “If NFL fans were told there were “weapons of mass destruction” enough times, they’d believe it. But what happens when you don’t find any????” Later, he apologized for it.

Drew Bress was born in Austin, Texas with Capricorn birth sign. He has an American nationality and has a mixed ethnicity of English, Irish, German, and French.

He is the son of Eugene Wilson “Chip” Brees II (father) and Mina Ruth (mother). His birth name is Drew Christopher Brees. His father worked as a prominent trial lawyer and his mother worked as an attorney.

He has a sister, Audrey Brees, and a brother, Reid Brees. After the divorce of his parents, living was hard for him and his brother Reid as they have to split their time between both parents’ homes.

Moving towards his education, Drew Brees studied at Austin Westlake High School and attended Purdue University where he graduated with a degree in industrial management in 2001. He is also a member of the Sigma Chi fraternity.

During the 2002 season, he played overall 16 games leading the team to an 8-8 record. During the 2004 season, the Chargers has won the AFC West for the first time in 10 seasons and he was selected for the 2004 Pro Bowl.

He was also named 2004 NFL Comeback Player of the Year. During the 2005 season, he became a free agent and signed a one-year contract with the Chargers that quadrupled his pay to $8 million for 2005. When he again became the free agent, Chargers offered him a 5-year, $50 million contracts that paid $2 million in base salary the first year and the rest heavily based on performance incentives but he didn’t accept it.

The New Orleans Saints and the Miami Dolphins were interested in Brees and he signed a six-year contract worth $60 million with the New Orleans Saints on 14 March 2006. During the 2007 season, he set the NFL record previously held by Rich Gannon for pass completions in a single season with 440.

Apart from this, he has a website that raises funds for improving the quality of life for cancer patients. Moreover, its other mission is to provide care, education, and opportunities for children and families in need.

Net Worth of Drew Brees

The 39 years aged, professional NFL player, Drew Brees is one of the highest-paid players in the NFL. Drew Brees has racked up nine Pro Bowl selections and a Super Bowl title since he joined the New Orleans Saints in 2006. As of 2019, Drew Brees has an estimated net worth of $130 million, including all of his properties and earnings. His current $24.25 million-a-year average salary is the highest in the history of the NFL.

Awards and Achievements of Drew Brees

Being a professional football player, he assumes several awards from his career which is given below:

Reflecting on his personal bio and affairs, he is a married man. It has been almost ten years and Drew Brees has been living an extraordinary life with his high school sweetheart, Brittany Dudchenko. After dating for 5 years, the couple finally tied their knots in February 2003, among their family and friends. Now they have four kids as three sons and a daughter. They named Bowen Christopher Brees, Baylen Robert Brees, Callen Christian Brees, and Rylen Judith Brees.

Apart from his love life, the four priorities in Brees’s life are faith, family, football, and philanthropy; otherwise known as the “four F’s” by Brees. Brees maintains his offseason home in San Diego. Brees released his first book, named Coming Back Stronger: Unleashing the Hidden Power of Adversity, co-authored by Chris Fabry and published by Tyndale House on 6 July 2006. He is a good friend of Eli Manning.

The outstanding New Orleans hitman is very masculine and has an attractive personality. Drew Bree has a height of 6 feet and weighs 95 kg. His hair color is light brown. Similarly, he has a pair of eye blue color. Furthermore, his chest, biceps, and hip size are 46-16-36 inches respectively.

Our contents are created by fans, if you have any problems of Drew Brees Net Worth, Salary, Relationship Status, Married Date, Age, Height, Ethnicity, Nationality, Weight, mail us at [email protected]