Andrew Alfred Scott is a Canadian reality television personality, best known as the co-host, on the TV series Property Brothers. 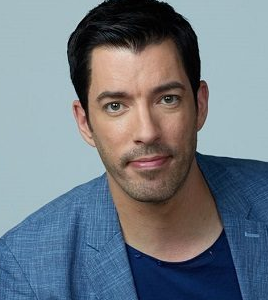 We knew we were different, even from our elementary school days. We were the class clowns

we engaged with people differently. We knew there was something out there that was meant for us

I think the best thing that Jonathan and I have done is… having really strong people working with us - our work environment and all of our employees and everybody, we're like one big family

Being stubborn is not an asset. You have to be able to see things through other people's eyes

A Canadian actor, realtor, as well as an entrepreneur who came to fame through the TV series Property Brothers as a co-host is named Drew Scott. He is also a co-founder of Scott Brothers Entertainment which creates and produces TV shows, films, and digital content. He has also participated in charity and philanthropic activities.

Property Brothers star Drew Scott and Jonathan Scott’s brother JD Scott is making an appearance in this week’s episode of HGTV’s Property Brothers: Forever Home. The Scott twins will give their older brother’s Las Vegas bachelor pad a head-to-toe transformation now that he is engaged to makeup artist, Annalee Belle. After buying the bachelor pad in a renowned Las Vegas neighborhood almost eight years ago, JD’s cozy residence is in dire need of updates. Thankfully, the Scott twins come to the rescue, helping to give JD and their future sister-in-law a refreshing makeover for the new home of their dreams. “IT. HAPPENED. WE’RE ENGAGED!!!!!!” Belle wrote on Instagram. “[J.D.] proposed to me on Halloween, but we only told friends and family until now. I’m bracing myself for all the ‘It’s about time’ comments. [Laughing out loud].” Belle later wrote that she was not telling anyone they should get married and admitted she was not interested in tying the knot until a few months before JD proposed. After JD’s upcoming wedding, Jonathan will be the lone bachelor Scott brother. In May 2018, Drew married Linda Phan in a gorgeous ceremony in Italy. “[JD] is a busy guy and he’s never really been able to fully commit to transforming his space, and it’s also felt like a bachelor pad for many years,” Drew said. “Now he’s engaged and he and his soon-to-be wife are going to be living in the house and we wanted to make sure it had a bit of both of their personalities in it.” The Property Brothers: Forever Home episode “JD and Annalee” airs Wednesday, July 10 at 9 p.m. ET on HGTV.

Drew Scott was born on 28th April 1978, in Vancouver, British Columbia as Andrew Alfred Scott. His nationality is Canadian and his ethnicity is native Canadians. His father’s name is Jim Scott and his mother’s name is Joanne Scott. He has a twin brother, Jonathan, and a younger brother James Daniel. His birth was a surprise to his parents because they thought that they were giving birth to a single child. On his seventh birthday, his father encouraged him and his twin brother to get jobs, and hence, they decided to start their business called JAM to making nylon covered hangers. He attended Thomas Haney Secondary School and graduated from there itself. He was active in sports, both coaching and playing on the basketball and volleyball teams. For his higher studies, he went to the University of Calgary and specialized in Kinesiology.

Drew Scott is a very handsome actor with awesome body features. His body build is athletic. He has also gained a lot of followers from his charming smile and attractive personality. He has a nice attitude as well. Talking about his height, he has a good height of 6 feet 4 inches. He has a balanced weight of 85 Kg. He has dark brown hair color and his eye color is hazel brown. His other body measurements will be added soon.

The career of Drew Scott

Drew Scott is a married person. He was married to Linda Phan. In May 2018, Drew married Linda Phan in a gorgeous ceremony in Italy. He met her at a Toronto Fashion Week event in 2010. The couple had been together about six years ago. They get engaged on 13th December 2016. The couple lives together in Las Vegas in the home that Drew owns with Jonathan. The couple is expecting their first baby. The couple is living a happy life as of today.

Net Worth of Drew Scott

Drew Scott is a very successful actor and he has accumulated a huge amount of money from his profession. He has a net worth of $10 million as of 2019 but his exact salary is not revealed yet. But there is no doubt in the mind of his follower that he is earning a considerable amount of salary from his career. Overall, he is satisfied with his earnings.

Our contents are created by fans, if you have any problems of Drew Scott Net Worth, Salary, Relationship Status, Married Date, Age, Height, Ethnicity, Nationality, Weight, mail us at [email protected]