Duff Goldman, an American citizen is famous for being a creative pastry chef and television personality. 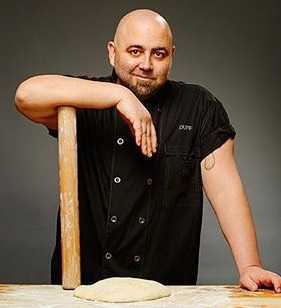 Jeffrey Adam Goldman is an American professional pastry chef and television personality, popular by the name Duff Goldman. He is a food network star. He currently works as executive chef at his own company, Charm City Cakes in Baltimore, Maryland. He is also the executive chef of the Charm City Cakes West based in Los Angeles. He has appeared on several television shows related to food and bakery.

Ace of Cakes star, Duff Goldman ties a knot with his longtime girlfriend, Johnna Colbry under a T-Rex at the Museum of Natural History in Los Angeles

The Food Network star, Duff Goldman, 44, is now married to his longtime girlfriend Johnna Colbry, 25. The couple tied a knot to each other exchanging vows at the Museum of Natural History in Los Angeles on 21 January 2019.

According to the reports, 250 people gathered for the ceremony held in the museum’s T-rex exhibit room, officiated by the bride’s grandfather. It was quite a strange environment as they were surrounded by wild animals.

– He is one of the popular pastry chefs and Aces of Cakes star.

Duff Goldman was born on 17 December 1974. His birthplace is in Detroit, Michigan in the United States. He holds American nationality. He was born to a Jewish family, Morrie Goldman, a father, and Jackie Winch, a mother. His family then moved to Missouri. He has two brothers, Willie Goldman and Luke Goldman. His parents got divorced in 1984 and Duff started living in both Northern Virginia and in the town of Sandwich on Cape Cod, Massachusetts. He is Jewish and belongs to white ethnicity. His zodiac sign is Sagittarius.

He started working in the kitchen at the age of fourteen. He first worked at a bagel store at a mall.

His turning point in his career came when he got a job to make cornbread and biscuits at one of the finest restaurants in Baltimore, Charleston.

He then worked under acclaimed chefs in California, including a stagiaire position at the French Laundry,

He also worked as executive pastry chef of the Vail Cascade Hotel in Colorado and in Todd English’s Olives restaurant.

In 2000, he opened his own business, Charm City Cakes.

He initially started selling his cakes from his house in Charles Village in Baltimore, Maryland with two assistants.

As the demands of his cakes increased, he hired more employees. Many of them did not have any culinary experience as pastry chefs but were experienced painters, sculptors, and architects.

They frequently use blow torches and power tool such as grinders and drills to help create the underlying supports of cakes.

He has made some unusual cakes. He has made Elvis in the form of a 3-foot buttercream sculpture, a smoking volcano, an anatomically correct ear, a replica of a CAT scan machine, a three dimensional German Shepherd, a Jeep, and an edible Wrigley Field.

In March 2008, he wrote his name in the Guinness Book of World Records for baking the world’s largest cupcake weighing 61.4 pounds and a foot tall. However, his record was stripped due to the cupcake having been made in two parts as reported in an episode of Ace of Cakes in 2009.

He has also made cakes for a number of celebrities including President Obama, Tom Clancy, Sir Roger Moore, Katy Perry, Neil Fallon, and many other celebrities.

He and his brother Willie released the book Ace of Cakes: Inside the World of Charm City Cakes from Harper Collins/William Morrow in October 2009. The book provides an exhaustive look at both the bakery and the show.

He lost a cooking competition on Iron Chef America.

He has won the Food Network Challenge competition.

The Ace of Cakes star is a married man. He got married to Johnna Colbry. He proposed to her on 21 April 2018 and she said yes to his proposal. Nine months later, they got married on 21 January 2019 at the Museum of Natural History in Los Angeles.

The American popular pastry chef stands at a height of 5 feet and 4 inches. He has a body weight of 78 kg. He has average body build. He has brown eyes and is bald.

Net Worth, Salary, Source of Income

Our contents are created by fans, if you have any problems of Duff Goldman Net Worth, Salary, Relationship Status, Married Date, Age, Height, Ethnicity, Nationality, Weight, mail us at [email protected]