Eduardo Jesus Vargas Rojas, professionally known as Eduardo Vargas in a Chilean football player. He plays as a forward for Liga MX club Tigres UANL and the Chile national team. 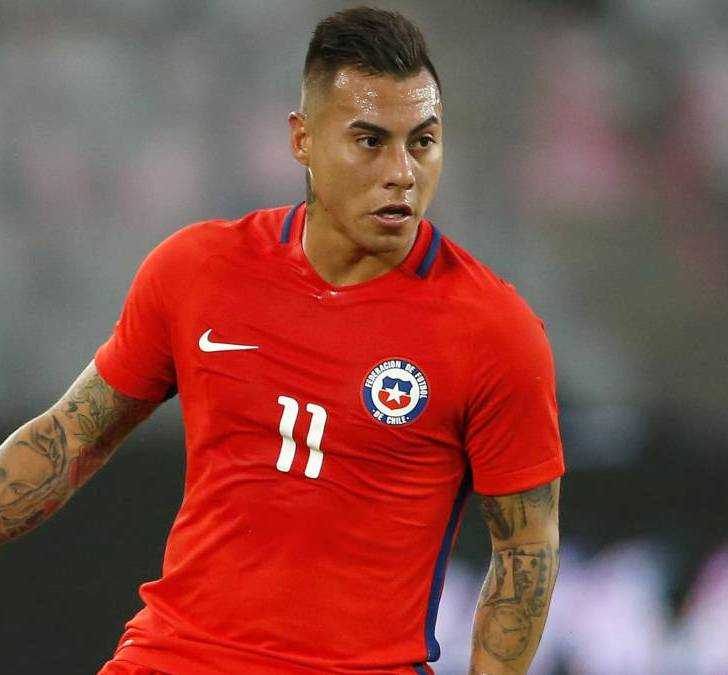 Eduardo Jesus Vargas Rojas, professionally known as Eduardo Vargas in a Chilean football player. He plays as a forward for Liga MX club Tigres UANL and the Chile national team. He started his senior football career at Cobreloa and has later played for Universidad de Chile, Napoli, Gremio, Valencia, Queen Park Rangers, and 1899 Hoffenheim. He became full international in 2009.

What is Eduardo Vargas famous for?

Where was Eduardo Vargas Born?

Eduardo Vargas was born on 20 November 1989. His birth name is Eduardo Jesus Vargas Rojas. He was born to a father, Eduardo Vargas Sr., and a mother, Pamela Rojas. His birthplace is in Santiago in Chile. He holds Chilean nationality. His zodiac sign is Scorpio. He grew up in Renca.

Cobreloa signed him in 2006. He was initially assigned to the team’s B-team in the Tercera Division.

He scored his first professional goal in March 2008.

He made his debut for the club on 25 January against Cobresal.

With his impressive performance, the club won both league semestral tournaments )Torneo Apertura and Torneo Clausura), as well as Copa Sudamericana in 2011.

He was the 2011 Copa Sudamericana’s top scorer.

He finished second to Neymar for the South American Footballer of the Year in 2011.

He was con-decorated as the Chilean Footballer of the Year in 2011.

He made his Napoli debut in a 2-1 Coppa Italia defeat of Cesena.

He scored his first Napoli goal in a 4-0 victory in the first UEFA Europa League campaign against AIK. He scored a hat-trick in the match, making him the first Chilean player to score a hat-trick in continental competition in Europe.

He made his Gremio debut in a Copa Libertadores match against LDU Quito.

He scored his first goal for Gremio in February against Fluminense in the Copa Libertadores.

He was then loaned to Spanish club Valencia in January 2014.

He made his club debut in a 3-2 win against Barcelona.

He scored his first La Liga goal against Real Betis.

He led Valencia to the 2013-14 UEFA Europa League semi-finals.

After his stint with Valencia, he joined the English club Queens Park Rangers on loan in August 2014.

He was sidelined for the rest of the 2014-15 season after suffering a knee ligament in a match against West Bromwich Albion in April 2015.

Vargas joined the Bundesliga club 1899 Hoffenheim in August 2015 for a reported fee of 5 million euros.

He signed with Liga MX club Tigres UANL in January 2017.

Vargas represented Chile U23 national team at the 2009 Toulon Tournament.

He made his senior international debut in November 2009 against Paraguay at the Estadio CAP.

He scored his first competitive international goal in a 2014 FIFA World Cup qualifying win over Peru.

He was the member of the Chile national team at the 2014 FIFA World Cup.

He was the key member of the Chile national team that won Copa America 2015. Chile defeated Argentina in a penalty shootout to win their first major international honor. Vargas was a joint top scorer of the tournament alongside Paolo Guerrero.

Vargas was the top scorer at the 2016 Copa America Centenario, where Chile defeated Argentina, once again in the penalty shootout.

He scored a brace for Chile’s opening match against Japan.

Copa Sudamericana Player of the Tournament: 2011

Who is Eduardo Vargas Married to?

Eduardo Vargas is a married man. He is married to Brazilian model Daniela Collett. The couple got married in 2014. The couple has two children Antonella Vargas and Benjamin Vargas.

What are Eduardo Vargas Body Measurements?

What is Eduardo Vargas Net Worth?

Eduardo Vargas earns from his professional football career. He has played in different countries including, Italy, Brazil, Spain, England, Germany, and Mexico. His income comes from salary, bonuses, contracts, and endorsements. His net worth is estimated at $3 million.

Our contents are created by fans, if you have any problems of Eduardo Vargas Net Worth, Salary, Relationship Status, Married Date, Age, Height, Ethnicity, Nationality, Weight, mail us at [email protected]