Elizabeth Evans May OC MP is a Canadian politician who served as leader of the Green Party of Canada from 2006 to 2019 and Member of Parliament for Saanich—Gulf Islands since 2011. 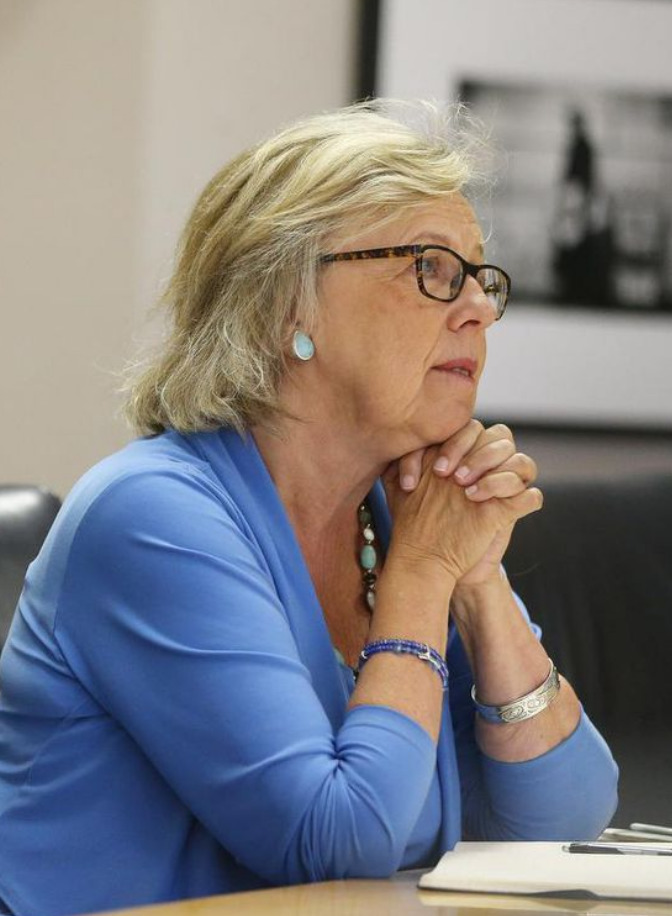 Facts of Elizabeth May

Elizabeth May is a Canadian politician who served as leader of the Green Party of Canada for 13 long years and is currently serving as the Member of Parliament for Saanich—the Gulf Islands since 2011. May is also an environmentalist, author, activist, lawyer and was the longest-serving female leader of a Canadian federal party. May was named as one of the World’s Most Influential women by Newsweek Magazine in 2010.

What is Elizabeth May Famous for?

Where is Elizabeth May From?

Elizabeth May was born on June 9, 1954, in Hartford, Connecticut. Her birth name is Elizabeth Evans May. Her nationality is Canadian. May belongs to White ethnicity while Gemini is her zodiac sign.

Elizabeth May is the daughter of Stephanie(mother) and John Middleton May(father). Her father was an accountant while her mother was a sculptor, pianist, and writer. Besides, Stephaine was a prominent anti-nuclear activist and John was Assistant Vice President of Aetna Life and Casualty. May and her family moved to Margaree Harbour, Nova Scotia in 1972 when she was 18. May was raised along with her younger brother named Geoffrey.

May previously attended St. Francis Xavier University but she dropped out soon in 1974. In 1980, she joined Dalhousie Law School and graduated in 1983. After graduating from law school, she got enrolled at Dalhousie University, during which she worked as an associate at a small law firm. Lastly, May studied theology at Saint Paul University and the University of Ottawa.

May was more concerned about her career in politics and activism as she first became known in the Canadian media in the mid-1970s when she leader as a volunteer in the grassroots movement. After then, May and others launched a political party “The Small Party” to raise environmental and anti-nuclear issues in 1980.

Besides, May has taught courses at Queen’s University School of Policy Studies, as well as at Dalhousie University.

Elizabeth May held the position of Associate General Counsel while working with the Public Interest Advocacy Centre in 1985.

In 1986, May became Senior Policy Advisor of the Progressive Conservatives. She was the first volunteer Executive Director of Cultural Survival Canada.

In 1989, May became the founding Executive Director of the Sierra Club of Canada. During her tenure, she received several awards including the United Nations Global 500 Award and the award for Outstanding Leadership in Environmental Education.

In 2005, she was elected as an officer of the Order of Canada.

On May 9, 2006, May entered the Green Party of Canada’s leadership race and on August 26, she won the leadership election.

The same year, she was awarded “Couchiching Award for Excellence in Public Policy”.

In 2010, she ran in Saanich—Gulf Islands, against Conservative cabinet minister Gary Lunn.

On November 28, 2010, May was named as the One of World’s Most Influential women by Newsweek Magazine.

On May 2, 2011, May became the first member of the Green Party of Canada to be elected as the Member of Parliament for Saanich—Gulf Islands.

In 2012, May tabled a Private member’s bill, Bill C-442, which was the first piece of Green Party legislation enacted in the history of Canada.

In 2012, May was voted in the House of Commons as Parliamentarian of the Year.

In the same year, she became the lucky politician to receive the Canadian Version of the Queen Elizabeth II Diamond Jubilee Medal.

On March 23, 2018, May was arrested for civil contempt during a demonstration against the Kinder Morgan pipeline.

May also has written eight books including her memoir, “Who We Are – Reflections of my Life and Canada” which was listed as a best-seller by The Globe and Mail.

On November 4, 2019, May resigned as Green Party leader after serving more than 13 years but she remains as parliamentary leader in the house.

Who is Elizabeth May Married to?

The beautiful lady, Elizabeth May is currently married to her husband, John Kidder. Kidder is one of the founders of the Green Party of British Columbia and also is known as the brother of actress Margot Kidder. Kidder and May first met in 2014 during some political campaigns.

Kidder and May got engaged on November 27, 2018. After almost six months after, the couple got married on April 22, 2019, at Christ Church Cathedral in Victoria, British Columbia.

May was previously bonded with her former partner, Ian Burton. Burton and May together have a daughter, Victoria Cate May Burton. Currently, after getting married to her dream husband, May is living a very happy life.

What is the Net Worth of Elizabeth May?

The 65 years old politician and activist, Elizabeth May have managed to earn quite a few amounts of money through her professional career as a server of government and as the leader of the Green Party of Canada. Spending around 13 years in the political field, May must have amassed a fortune worth million dollars. May enjoys her fortune which is estimated to be around $1 million.

How Tall is Elizabeth May?

Elizabeth May is a beautiful lady of the 90s. May has a fair complexion with blonde hair and blue eyes.

Our contents are created by fans, if you have any problems of Elizabeth May Net Worth, Salary, Relationship Status, Married Date, Age, Height, Ethnicity, Nationality, Weight, mail us at [email protected]