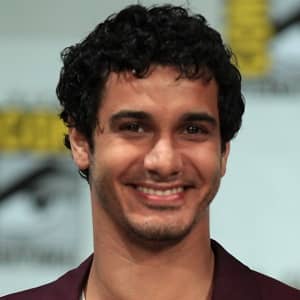 Elyes Gabel is a professional actor from Britain who is best known for portraying the role of Dothraki Rakharo during the first and second season of the famous HBO television series “Game of Thrones”. He is equally notable for playing as Dr. Gupreet in the medical drama “Casualty”

Where was Elyes Gabel born?

Elyes Gabel was born on the 8th of May 1983, in Westminster, London, England. He is British by nationality and is currently 37 years old. Talking about his family and childhood, he is from a mixed ethnic group of Irish, Portuguese, Dutch, Spanish, Algerian, and Anglo-Indian descent. His family had shifted to Canda for some time and returned to the UK and living in Bristol before settling in Manchester. However, there are no details about his parents’ details and background.

What is his educational background?

Elyes Gabel studied St. Damian’s Roman Catholic Science College and later enrolled at Strodes College. There he began training his acting skills and also trained in the Northern Kids Theatre Company and the Oldham Theatre Workshop. However, he didn’t complete his studies as he dropped out to become a part of the children’s television show titled “I Love Mummy”

How is the professional life of Elyes Gabel?

Professionally, Elyes Gabel is an actor who participated in stage productions of West Side Story, Oliver! and Diary of Anne Frank after dropping out. Soon he joined the cast of Casualty as Guppy Sandhu and was also nominated for Best Newcomer at the 2005 National Television Awards. However, in 2007, he decided to leave Casualty in order to pursue new acting challenges and concentrate on recording music with his band.

He later went on to appear as Vimel, a trainee priest, in the BBC drama Apparitions, alongside Martin Shaw. The series aired on BBC One on 13 November 2008 and went also appeared as Danny in the television horror series Dead Set.  To summarize his roles, he has appeared as DC Jose Rodriguez in the drama, Identity, as Prince Djem in episode 3 of Showtime’s The Borgias.

Moreover, he played as Shahrouz in Season 3 of Body of Proof, and in 2011, he played in the second series of Psychoville. Then came his breakthrough as he was cast as the Dothraki “Bloodrider” Rakharo in HBO’s Game of Thrones. The same year, he played a role in  Christopher Nolan’s Interstellar and also appeared in Spooks: The Greater Good as Adem Qasim.

Furthermore, Gabel appeared as Walter O’Brien on the American drama series Scorpion, based on the real-life of Walter O’Brien. The series aired on 22 September 2014 but was canceled after 4 seasons, 93 episodes with the last episode on 16 April 2018.

How much is his wealth?

According to several media reports, he has an estimated net worth of $2 million at the moment. He has earned such wealth through a successful career in the acting industry, having been active in the industry since 2001. However, there are no official records on his earnings but as he continues his endeavors, his wealth is sure to increase.

Is he in a relationship or single?

Referring to the dating life of Elyes Gabel, he was previously linked to his co-star Katharine McPhee. The couple was seen kissing in 2014 and soon confirmed their relationship. However, they called it a quit in 2016. According to several media posts, they were even speculated to be back together. However, the two have not publicly confirmed that they are back together. Thus, as of now, Elyes Gabel is most probably single.

How tall is Elyes?

Physically, Elyes Gabel stands tall with a height of 6 feet and weighs about 77 kilograms. However, there are no details available regarding his other body measurements such as chest-bicep-waist size and shoe size. Moreover, his body features of dark brown hair and a pair of dark black eyes.

Our contents are created by fans, if you have any problems of Elyes Gabel Net Worth, Salary, Relationship Status, Married Date, Age, Height, Ethnicity, Nationality, Weight, mail us at [email protected]