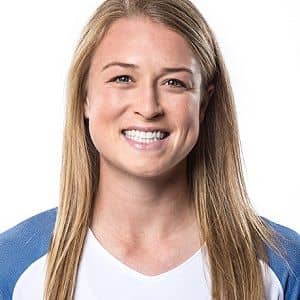 Emily Sonnett is a professional female football player from America. She is currently popular for playing for the Sydney FC on loan from Portland Thorns FC. She even plays for the United States Woman’s national soccer team as a defender.

How old is Emily Sonett?

Emily Sonett came to this world on the 25th of November, 1993, in the town of Marrietta, in the state of Georgia. She is American by nationality and is currently 26 years old. Talking about her personal life, her birth name is Emily Ann Sonnett and has a twin sister called Emma who also plays collegiate football.

Emily was born to mother Jane Sonnett and father Bill Sonnett. Academically, she was enrolled in the fellowship Christian school in Roswell for her high school education before going to the University of Virginia.

How did Emily rise to stardom?

From the very beginning of her life, Emily Sonett had a keen interest in soccer and began playing at a very early age. During her college days, she appeared for 98 matches and scored 6 goals. She even won the award for ACC Defensive Player of the Year.

Later in 2016, Emily was college picked by Portland Thorns FC in the first overall pick in the 2016 NWSL college draft. Likewise, she scored her debut goal in the semifinal of the NWSL Championship. Moving on with her career, she was shifted to Sydney FC on a loan on October 24, 2017. During her debut with Sydney FC, she was successful in scoring a penalty kick. Internationally, she has benefited the US football team a lot as she got her first chance to play for the US women’s national soccer team on October 16, 2015. S

imilarly, she has represented the U-18 and U-23 teams of the States. She went on to receive her first international cap against Brazil on October 25, 2015. As of now, she plays the role of midfielder and defender for Portland Thorns FC of NWSL.

How much does Emily Sonett earn? Net Worth, Salary

Throughout her career as a professional soccer player, she has bagged a whopping total net worth of about $1 million. However, she is yet to reveal her official salary. Moreover, according to several football sites, she might be getting an average salary of $16,538 to $46,200. Additionally, she makes extra earnings from endorsement with various brands and companies. As of 2020, she is currently associated with the Adidas brand.

How tall is Emily?

Referring to the physical attributes of Emily Sonett, she stands with a height of 5 feet 7 inches tall and her weight is unknown. Taking a great look at her social media pictures, she looks very healthy with a well-shaped body. Moreover, she looks beautiful with her long brown hair and a pair of hazel eyes. Moreover, she is yet to provide her any other body measurements.

Is she dating anybody?

the 26-year-old keeps her personal life so secret that there is not even a single hint about her relationship status. She has not seen anyone in the public and media either. Currently, she focuses on her work rather than getting involved with anybody. Therefore, the relationship status of Emily is most probably single at the moment.

Taling about the social media presence of Emily, she is seen quite active on media sites such as Instagram and Twitter. She goes by the username @emilysonnett and is a verified user as well. Her profile has accumulated more than 193K followers to date. Likewise, her Twitter handle is @emilysonnett which she joined in January 2011, and is able to accumulate more than 76.7K followers to date.

Our contents are created by fans, if you have any problems of Emily Sonnett Net Worth, Salary, Relationship Status, Married Date, Age, Height, Ethnicity, Nationality, Weight, mail us at [email protected]