Engagement rings: Non-traditional ones with imperfect diamonds and colored gemstones are gaining popularity!

When one thinks of engagement rings, we imagine a central white sparkling solitaire or a halo of small gems around a central jewel. But over the years and especially in the last decade, these rings have become non-traditional. This is due to couples going adventurous, choice of celebrities that trickles down to the consumer market, cost factor,band sustainability.

We do known that diamonds in engagement ring are a tradition. They stand for strength and union. They continue to reign in this field with 86% of the 5000 respondents to a survey by The Knot preferring them as the central stone. Next on this popular list was diamond doppelganger moissanite. They started with royalty and it was George III’s wife, Queen Charlotte who popularized it. The six-prong solitaire setting design of Tiffany & Co. in 1886 further made diamonds a cultural part of engagement rings. Philadelphia copywriter, Frances Gerety wrote the famous slogan for mining giant De Beers that read: A diamond is forever.

“I think there is a larger shift in attitudes surrounding engagement rings,”

“It should be something that makes you happy, and it doesn’t have to follow rules or traditions.”

“When it’s not white, it’s considered an imperfection,”

Point No Point is her Seattle-based studio that specializes in imperfect diamonds for rings. These include black and “salt-and-pepper,” or gray-speckled, diamond rings. She adds:

“(Even) champagne diamonds weren’t considered very valuable because they had a color to them,”

“(Brown) stones would not be looked at 10 years ago for an engagement ring like that. When people make unique choices at a high-profile level, it gives women courage to do something that’s a little different than the traditional design.”

Colored gemstones are also becoming part of these rings.

Catbird and Point to Point are designing, making, and selling non-traditional engagement rings and these have a market too now. They often use imperfect diamonds and colored gemstones in this making. Talking of raw imperfect diamonds, Julie Stark says:

“Just like a fingerprint or snowflake, they all have their own kind of markings, and translucency. We’re able to appreciate the beauty of something that’s not perfect.”

“Nature can create something that’s so perfect in its own right. I created a range that looked like the metal had seemingly grown around stones — like the whole thing could have been unearthed together.”

Lab-grown diamonds are also finding a market. 1 in 4 people preferred it and this proportion is growing. Leigh from Catbird says:

“It’s a priority of our customers to know the provenance of the materials that we work with,”

Additionally, Social media and e-commerce have impacted people choices. But despite all this, diamonds are not likely to get dethroned. It continues to reign with 60 to 70% people still wanting it on their rings. Marion states:

“We’re living in a glorious Renaissance period of engagement rings, there’s no doubt about it,” 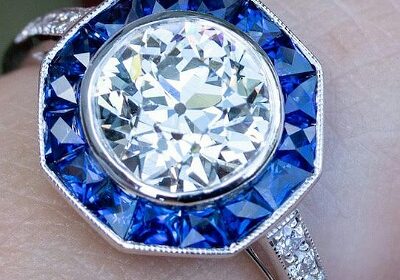