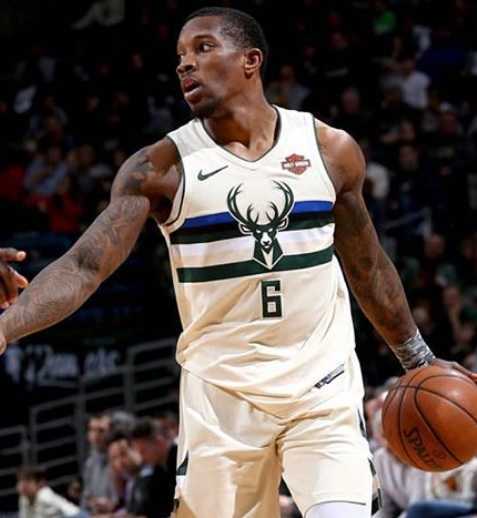 Eric Bledsoe professionally known as Eric Bledsoe is an American basketball player. He currently plays for the Milwaukee Bucks of the National Basketball Association (NBA). He plays in the point guard position. The Oklahoma City Thunder selected him with the 18th overall pick in the 2010 NBA draft. He was subsequently traded to Los Angeles Clippers. He has also played for Bakersfield Jam of NBA G League and Phoenix Suns of NBA before joining the Bucks in 2017. He played collegiate basketball for the Wildcats of the University of Kentucky.

What is Eric Bledsoe Famous For?

Where was Eric Bledsoe Born?

Eric Bledsoe was born on 9 December 1989. He was born to a father, Eric Bledsoe Sr., and a mother, Maureen Reddick. His birth place is in Birmingham, Alabama in the United States. He holds American nationality. His zodiac sign is Sagittarius. He has 2 siblings.

He attended Parker High School in Birmingham, Alabama. He averaged 20.3 points, 9.4 rebounds, and 11.5 assists per game as a senior at high school. He led Parker to a 5A state championship runner-up finish. Rivals.com considered him a five-star recruit. He was listed as the No. 3 point guard and the No. 23 player in the nation in 2009. He was questioned for suspicious grading in high school. Eventually, he was cleared as eligible to enroll in college.

Bledsoe committed to play for the Kentucky Wildcats of the University of Kentucky.

He only played one season at Kentucky.

He helped the Wildcats to a 35-3 record and Elite Eight appearance.

He was also named to the Sporting News SEC All-Freshman Team and was a CollegeInsider.com Freshman All-American.

In NCAA, he set a Kentucky school record of eight made three-pointers in an NCAA tournament game against East Tennesse State in scoring a career-high 29 points (9-11 FG, 8-9 3 FG).

He forgo his final three seasons at Kentucky and declared for the NBA 2010 draft.

The Oklahoma City Thunder selected him with the 18th overall pick in the 2010 NBA draft.

He was subsequently traded to the Los Angeles Clippers.

He was named to NBA All-Rookie Second Team.

He started 1 game in 40 games in his second season. During the season, he was assigned to the Clippers’ NBA Development League affiliate team, the Bakersfield Jam.

He participated in the 2013 All-Star Game’s Slam Dunk Contest.

Bledsoe was traded to the Phoenix Suns in July 2013.

He made his Suns debut against the Portland Trail Blazers.

He injured his left shin during the third quarter of the Suns’ last game of 2013 against the Clippers. The injury eventually turned into a meniscus injury that sidelined him for nearly two and a half months.

He was traded to the Milwaukee Bucks in November 2017.

He averaged 15.9 points, 5.5 assists, and 4.6 rebounds per game in his second season with the Bucks.

He signed a four-year contract extension with the Bucks worth $70 million in March 2019.

Who is Eric Bledsoe Married To?

Eric Bledsoe is a married man. He is married to his longtime girlfriend Morgan Poole. The couple tied a knot to each other on 1 July 2017. The couple has a son, Ethan, and a daughter, Ariana.

What are Eric Bledsoe Body Measurements?

What is Eric Bledsoe Net Worth?

Eric Bledsoe earns playing professional basketball in the NBA. His income comes from salary, wages, bonuses, contract extensions, and endorsements (if any). As of 2019, his net worth is estimated ta $50 million.

Our contents are created by fans, if you have any problems of Eric Bledsoe Net Worth, Salary, Relationship Status, Married Date, Age, Height, Ethnicity, Nationality, Weight, mail us at mar[email protected]