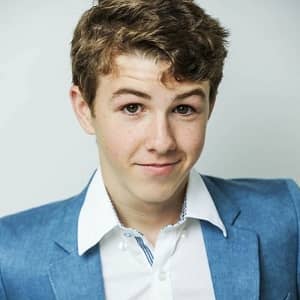 Ethan Wacker is an actor from America who portrays Bernie Schotz on Disney channel comedy television series Bizaardvark. You might not be familiar but Ethan also voiced cartoon characters in The Stinky & Dirty Show(2015) and Miles from Tomorrowland.

When was Ethan Wacker born?

Ethan Wacker was born as the son of Richard F. Wacker and Eileen Wacker on May 8, 2002. He hails from Hawaii, USA, and is currently 18 years old. Talking about his parents‘ background, his father is a president in ABS whereas his mother is an author. E

than grew up along with his three siblings, two of them are his sisters named Natalie and Olivia, he has an elder brother named Christian Wacker. Academically, detail information about his study is unknown, we know that he is currently attending a high school.

How did Ethan Wacker rise to stardom?

Fast forward to his career, Ethan Wacker started his acting career at the tender age of thirteen. Initially, Wacker appeared as a guest star in KC undercover in 2015 and ‘Miles from Tomorrowland’ as Pip Whipley in the same year. Moving on, the actor provided his voice for ‘The Stinky & Dirty Show’ in 2016.

After the recognition from the movie, the actor landed a role in ‘Bizaardvark’ as Bernie in 2016 which led his popularity to skyrocket. Alongside his profession as an actor, Ethan also has a YouTube channel with over 250 thousand subscribers where he posts his personal video logs.

What are Ethan Wacker’s net worth and salary?

It is not a matter of doubt that The Disney star earns a good amount of wealth despite his young age. As he has appeared in several commercials and short movies for NBA teams like Golden State Warriors and Boston Celtics. Additionally, Wacker also earns a decent amount from his YouTube channel. According to the estimation of several media sources, his estimated earnings is to be $7.8 thousand. And as of the year 2019, Ethan Wacker’s net worth is estimated to be $300 thousand.

The young, handsome, and talented actor stands at a height of 5 feet 2 inches and weighs about 40 kilos. He has a slim body with an average built. His body features of brown hair and a pair of dark brown eyes. However, his other body measurements are still unknown to the media.

Is Ethan in a relationship?

Talking about the love life of such a dashing actor, Ethan Wacker is single as of now. However, the actor was in a romantic relationship with his ‘Bizaardvark’ co-actress Olivia Rodrigo. The couple initially had shared lots of photos of them being together on their social media. However, Ethan announced their breakup via an Instagram story despite all the memories together.

In the world of social media, the star has a bunch of fan followers for his undeniable talent and appearance. He is available on Instagram under the username @imethanwacker with over 2.1 million followers. Likewise, he has about 25k followers on Facebook, 1.9 million followers on Tik Tok, and a whooping number of subscribers of 247k.

Our contents are created by fans, if you have any problems of Ethan Wacker Net Worth, Salary, Relationship Status, Married Date, Age, Height, Ethnicity, Nationality, Weight, mail us at [email protected]