Evan Thomas Spiegel is the co-founder and CEO of the American multinational technology and social media company Snap Inc. 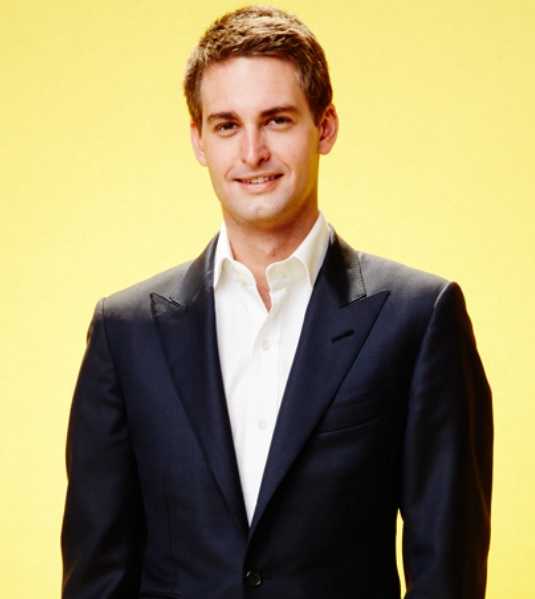 co-founder and CEO of Snap Inc.

Someone will always have an opinion about you. Whatever you do won't ever be enough. So find something important to you. Find something that you love

Evan Thomas Spiegel, professionally known as Evan Spiegel is an American businessman. He is the co-founder and CEO of the American multinational technology and social media company Snap Inc. He created the company Snapchat Inc. with Bobby Murphy and Reggie Brown while they were students at Stanford University. He was named the youngest billionaire in the world in 2015. He is married to a former model, Miranda Kerr.

Evan Spiegel, co-founder, and CEO of Snap Inc., and his wife Miranda Kerr, a former supermodel from Australia are expecting their baby no. 2, according to Kerr’s rep. Their announcement came just 10 months after the birth of their first child. The couple has a son named Hart Kerr Spiegel born on 7 May 2018. Their son was named after Spiegel’s grandfather. The couple tied a knot to each other in a private ceremony in Los Angeles on 27 May 2017.

What does Evan Spiegel have a reputation for?

Snap Inc. co-founder and CEO. In 2015, he was named the World’s Youngest Billionaire.

Evan Spiegel was born on June 4, 1990, in New York City. Evan Thomas Spiegel is his given name. He was born to a mother Melissa Ann Thomas and a father John W Spiegel. His birthplace is in the United States, in the city of Los Angeles. He is a resident of the United States of America. Gemini is his zodiac sign. He grew up in the Pacific Palisades neighborhood of Los Angeles, California. He was brought up as an Episcopalian.

He went to Santa Monica’s Crossroads School for Arts and Sciences. While still in high school, he took architecture classes at Otis College of Art and Design. He moved on to Stanford University after that. He also took architecture courses at the Art Center College of Design before enrolling at Stanford.

At Red Bull, he did an unpaid internship in sales. He also served as a paid intern for a biomedical company in Cape Town, South Africa, as a careers mentor, and on the TxtWeb project at Intuit. He was a Kappa Sigma fraternity brother.

In April 2011, he suggested an app with ephemeral messaging as a product design class project while at Stanford. His classmates laughed at him when he proposed.

Later that year, he collaborated with fellow Stanford classmates Bobby Murphy and Reggie Brown to launch a version of this idea named “Picaboo.”

Later, it was renamed Snapchat.

Their app gained a lot of momentum in a limited amount of time.

Evan dropped out of Stanford before finishing his degree in 2012 to concentrate on Snapchat.

By the end of 2012, his app had surpassed one million daily active users.

Murphy and Evan would have over “70 percent of the voting power” in Snap Inc. after the expected March 2017 IPO, according to the Wall Street Journal. They would also own about 45 percent of the total stock.

In July 2018, he announced on NBC News’ “Keep Tune” that he had completed his degree requirements and had graduated from Stanford in 2018.

He cited his infant, Hart Kerr Spiegel, as motivation to finish his education so that he can later encourage his son to complete his education.

Who is Evan Spiegel’s wife?

He started dating a retired Australian model, Miranda Ker in 2015. The couple got engaged in July 2016. A year later on 27 May 2017, the couple tied a knot to each other in a private ceremony in Los Angeles. His wife Kerr described him as “very traditional”. She also stated that he believes in sex after marriage. The couple announced in November 2017 that they were expecting their first child. Their first child, a son, Hart Kerr Spiegel was born on 7 May 2018. Hart was named after Spiegel’s grandfather. They announced in March 2019 that they are expecting their second child.

He purchased a 7.164 square feet house for $12 million just a month before his engagement to Kerr. The house was previously owned by Harrison Ford.

He currently lives with his family in Brentwood, Los Angeles in California.

What are Evan Spiegel’s Body Measurements?

How much does Evan Spiegel make a year?

Our contents are created by fans, if you have any problems of Evan Spiegel Net Worth, Salary, Relationship Status, Married Date, Age, Height, Ethnicity, Nationality, Weight, mail us at [email protected]