Everton Soares is a Brazilian professional football player who currently plays as a forward in the club Gremio. 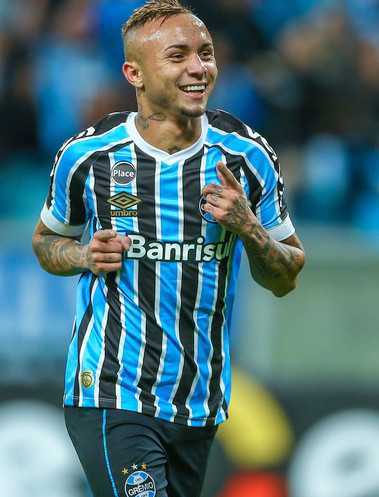 Everton Soares is a Brazilian professional football player who currently plays as a forward in the club Gremio. He also plays for the Brazil national football team.

What is Everton Soares famous for?

-Famous as a Brazilian football player.

When was Everton Soares born?

Everton Soares was born on 22nd March 1996 in Maracanaú, Ceará, Brazil. His birth name is Everton Sousa Soares. Brazilian is his nationality. His ethnicity is  South  American. Aries is his zodiac sign.

He was born in a Brazilian family. He has no siblings. He was raised in his hometown, Maracanau. He was interested in playing football, since his childhood. He got inspired to play football by Pele, a great Brazilian footballer.

He joined Gremio’s youth setup and he started playing football in 2012.

How is Everton Soares’s career?

-Everton Soares started his professional football career by signing a permanent contract with the Brazilian club Gremio in October 2013.

-He made his first debut for the club on 19th January 2014 as a substitute against Sao Jose-Pa.

-On 20th April 2014, he made his Brazilian Serie-A debut as a substitute against Atletico Paranaense. He only appeared in few matches of the club in 2014.

-He scored his first Brazilian Serie-A goal against Goias on 6th September 2015. In this season, he appeared in almost all the matches and scored many goals for the club.

-He renewed his contract with the club until 2020 on 15th August 2016. He scored the goal in the 2016 Copa Do Brasil Finals win against Atletico Mineiro.

-He made his national debut on 17th August 2018 in a friendly match against the United States. He also was on the first list of Brazil after the 2018 FIFA World Cup.

Who is Everton Soares married to?

The Brazilian footballer, Everton Soares is unmarried. He is also not in any relationship. He seems to be focusing more on his career than his personal life.

What is the net worth of Everton Soares?

The Brazilian footballer, Everton Soares has an estimated net worth of $4 million USD. The footballer has good earning from his profession.

How tall is Everton Soares?

The 23 years aged, Everton Soares has a well-maintained body. He stands 5ft 9 inches(1.74m) tall and has a bodyweight of 72 kg.

He has dark brown hair and brown eyes.

Our contents are created by fans, if you have any problems of Everton Soares Net Worth, Salary, Relationship Status, Married Date, Age, Height, Ethnicity, Nationality, Weight, mail us at [email protected]