Federico Valverde is an Uruguayan professional football player who plays as a center midfielder for the Spanish club Real Madrid. Besides he has played for Peñarol (2015-2016) and on loan for Deportivo La Coruña (2017-2018). 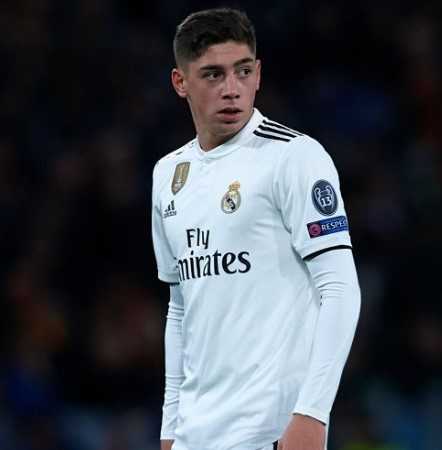 Federico Valverde is an Uruguayan professional football player who plays as a center midfielder for the Spanish club Real Madrid. Besides he has played for Peñarol (2015-2016) and on loan for Deportivo La Coruña (2017-2018). To know more about him, you can read below.

What is Federico Valverde Famous For?

Where was Federico Valverde Born?

Going back to his early life, Federico Valverde was born Federico Santiago Valverde Dipetta in the year 1998. His birthplace is in Montevideo in Uruguay. He holds Uruguayan nationality belongs to the White ethnicity. He was born to a father, Julio Valverde, and a mother, Doris Valverde. Further, His zodiac sign is Cancer. The information regarding his academic qualifications is yet to be disclosed.

Who is Federico Valverde Married to?

Federico Valverde is currently in a relationship with Mina Bonino. The duo met through social networks, and although initially, Mina did not want to establish a relationship with him due to the age difference. However, just two months after the meeting, she decided to leave everything in Argentina to move to Spain with Federico. The couple welcomed their first child, a son in February 2020. Presently, the lovebirds seem to be happy with their newborn child.

He previously dated Julieta Rivera who is a model and Instagram celebrity. They started dating in 2015. He quite often shared photos with his then-girlfriend with a beautiful caption expressing his love towards her. However, their relationship came to an end in 2018 shortly before the World Cup in Russia, and from then on the two deleted the photos from their socials.

What is Federico Valverde Net Worth?

Federico Valverde earns a decent amount of money and fame through his profession as a footballer in the field of the sports industry. As per online sites, his estimated net worth said to be $4 million and his salary is somewhere around $1.2 million at present. Presently, his market value is €50 million. However, his assets details are yet to be disclosed.

How Tall is Federico Valverde?

Federico Valverde has a height of 6 feet o inches and he has a body-weight of 78 kg. He has an athletic body build with dark brown eyes and his hair color is also dark brown. Further, his other body information is yet to be disclosed. In the case of disclosure, we will let you know.

Our contents are created by fans, if you have any problems of Federico Valverde Net Worth, Salary, Relationship Status, Married Date, Age, Height, Ethnicity, Nationality, Weight, mail us at [email protected]