Felicity Huffman is an American film, stage, and television actress. 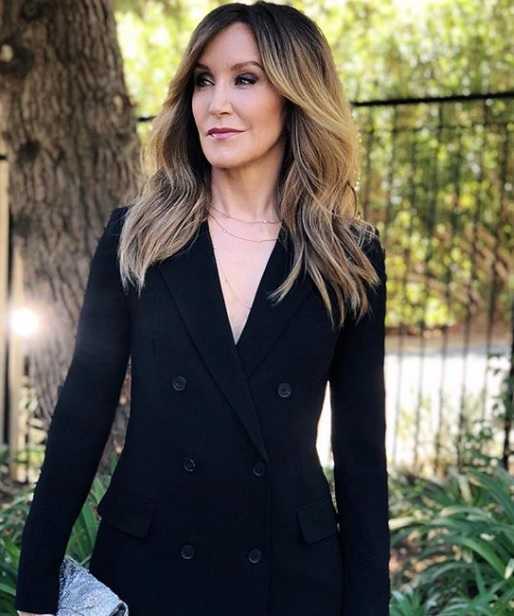 Felicity Kendall Huffman popularly known as Felicity Huffman is an American film, stage, and television actress. She is best known for her roles as Lynette Scavo on the ABC TV series, Desperate Housewives, as Dana Whitaker in the ABC comedy-drama Sports Night, and in the third season of ABC anthology crime drama, American Crime. She started her acting career in the theatre and has appeared in numerous television series and films. Her major films are, Transamerica, Reversal of Fortune, The Spanish Prisoner, Magnolia, Path of War, Georgia Rule, Phoebe in Wonderland, Rudderless, and Cake.

Felicity Huffman was arrested on 12 March and charged with conspiracy to commit mail fraud and honest services mail fraud by the FBI and U.S. Attorney’s Office. She was allegedly involved in the nation-wide college admission scandal.

She donated $15,000 to the Key Worldwide Foundation. Prosecutors alleged that she actually paid that amount to the person who pretended to be her daughter and appeared on the SAT for her daughter. As a result, her daughter obtained greatly improved SAT score than the score on the Preliminary SAT.

Felicity Huffman was born on 9 December 1962. Her birth name is Felicity Kendall Huffman. She was born to a father, Moore Peters Huffman, and a mother, Grace Valle. She has German, English, Scots-Irish, Scottish, French-Canadian, and Irish ancestry. Her birthplace is in Bedford, New York in the United States. She holds American nationality. Her zodiac sign is Sagittarius. Her parents got divorced when she was one year old. She discovered that her biological father was Roger Tallman Maher when she was a teenager. She has 7 siblings. They are 6 sisters, Mariah, Betsy, Grace, Isabel, Jessie, and Jane, and one brother, Moore Jr. She spent her youth in Snowmass, Colorado. Her paternal great-grandfather was Gershom Moore Peters and her maternal great-grandfather was Frederick Berthold Ewing. Her great-great-great grandfather was Joseph Warren King.

She attended The Putney School in Putney, Vermont. She then graduated from Interlochen Arts Academy in Michigan in 1981. Later, she attended New York University, Circle in the Square Theatre School and the Royal Academy of Dramatic Art in London, England.

She made her acting debut working in the stage plays. She made her debut on stage in 1982.

She debuted on Broadway in 1988 in the role as Karen in David Mamet’s play, Speed the Plow.

She starred in the premiere of David Mamet’s play Boston Marriage in 1999.

She has starred in numerous stage plays.

She made her big screen debut in a small role in Mamet’s film Things Change in 1988.

Her major film is 2005 American comedy-drama film, Transamerica, where she appeared as a transgender woman, Sabrina ‘Bree’ Osbourne.

Her role in Transamerica earned her numerous awards and nominations.

She was the writer, director, and also starred in the 2010 film, Lesster.

She had a voice role in the 2006 animated interactive DVD movie, Choose Your Own Adventure: The Abominable Snowman.

Her upcoming films are Otherhood and Tammy’s Always Dying.

She made her television debut as Sara Greene in the 1978 American television anthology series, ABC Afterschool Special.

he landed the major role as Dana Whitaker in an American television series, Sports News, where she appeared between 1998 and 2000.

Her best-known television role is as Lynette Scavo in an  American mystery comedy-drama television series, Desperate Housewives. She appeared in the series from 2004 to 2012.

She also had a major role in an American anthology crime drama television series, American Crime between 2015 and 2017.

She has also appeared in Raven, Law & Order, The X-Files, Early Edition, Chicago Hope, The West Wing, Girls Club, Kim Possible, Frasier, The D.A., Studio 60 on the Sunset Strip, and Get Shorty.

She had a voice role in the 2017 television series BoJack Horseman.

She has also appeared in television films such as Lip Service, The Water Engine, The Heart of Justice, Harrison: Cry of the City, A Slight Case of Murder, Snap Decision, Path to War, and Reversible Errors.

Honored with 1998 Grand Jury Award-Comedy (Performance) by the US Comedy Arts Festival.

She won Obie Award in 1995 for her performance in the play The Cryptogram.

2005 Primetime Emmy Award for Outstanding Lead Actress in a Comedy Series, 2005  Satellite Award for Best Actress in a Series — Comedy or Musical, 2006

2015 Women’s Image Network Award for Outstanding Actress Made for Television Movie/Miniseries for her work in American Crime.

Who is Felicity Huffman  Married to?

Felicity Huffman dated actor William H. Macy in an on-and-off relationship for 15 years. They later got married on 6 September 1997. The couple has 2 daughters, Sofia Grace and Georgia Grace.

What are Felicity Huffman’s Body Measurements?

What is Felicity Huffman’s Net Worth?

The American stage, film, and television actress earns from working in the entertainment industry. She has established herself as a prominent television actress. As of 2019, her net worth is estimated at $20 million.

– She identifies as pro-choice and has campaigned for women’s rights on behalf of NARAL.

– She revealed in 2005 that she had suffered from both anorexia and bulimia in her late teens and twenties.

– She is the co-author of the self-help book, A Practical Handbook for the Boyfriend.

– She launched a website, What The Flicka in March 2012. The website is dedicated to women and mothers.

Our contents are created by fans, if you have any problems of Felicity Huffman Net Worth, Salary, Relationship Status, Married Date, Age, Height, Ethnicity, Nationality, Weight, mail us at [email protected]