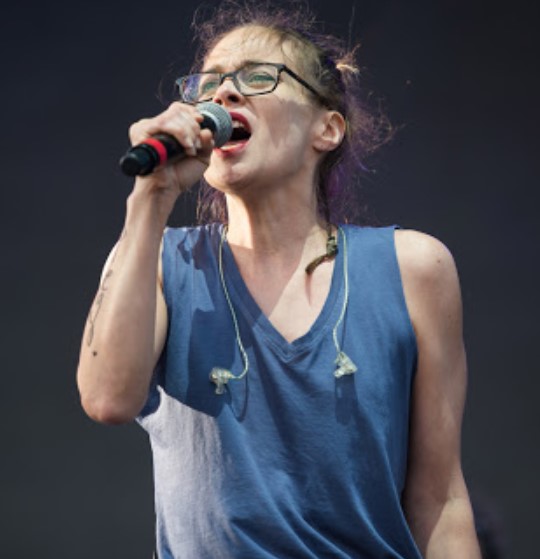 Fiona Apple is an American singer-songwriter and pianist who is also the recipient of a Grammy Award. She is also known for her songs like “Sleep to Dream” and “Criminal”. Fiona first got recognized as the daughter of a very popular actor, Brandon Maggart.

What is Fiona Apple Famous for?

Where was Fiona Apple Born?

Fiona Apple was born on September 13, 1977, in New York City, United States. Her birth name is Fiona Apple MacAfee-Maggart. Apple belongs to White ethnicity while Virgo is her zodiac sign.

Fiona Apple is the daughter of Diane McAfee(mother) and Brandon Maggart(father). Her mother is a singer while her father is a popular actor. Her parents met when they both were cast in the Broadway musical, “Applause”.

Fiona grew up along with her sister, Maude Maggart, who is a cabaret singer. She has other 5 half-siblings from her father’s previous marriage: Jennifer, Spencer, Justine, Julienne, and Garett.

She spent her childhood with her mother and sister, Morningside Gardens, Harlem and with her father in Los Angeles, California. Belonging to a family with a music background, Apple was classically trained on piano as a child and even began composing her own pieces by the age of eight.

Apple, however, was raped outside the apartment at the age of 12 in Harlem. After the incident, she suffered from panic attacks and started to spent hours at a Model Mugging class, practicing self-defense.

With the release of her second album, “When the Pawn..” in 1999, she got her album’s title length a spot in the Guinness Book of Records for 2001.

On October 4, 2005, her third album, “Extraordinary Machine” was released which was produced by Jon Brion. It debuted at number seven and was nominated for a Grammy Award for “Best Pop Vocal Album”.

In 2017, she released a protest song, “Tiny Hands” for the Women’s March on Washington.

In 2018, she joined Shirley Manson at the female-driven Girl School Festival in Los Angeles for a cover of “You Don’t Own Me”.

On April 17, 2020, her self-produced album, “Fetch the Bolt Cutters” consisting of 13 songs was released. The album is Fiona’s 5th album and 1st release in the early 8 years.

Who is Fiona Apple Dating?

Fiona Apple isn’t married yet and is currently single. Fiona however dated several handsome boys including his first serious teenage love, Tyson on basis of which, she wrote her first album, “Tidal”. She then was in a relationship with David Blaine, an illusionist, and endurance artist.

She also dated director Paul Thomas Anderson. They began dating in 1997 and after 5 years of their relationship, they broke up in good terms in 2002. In June 2007, she was seen with the author, Jonathan Ames.

She has also admitted she maintains friendships with all of her ex-boyfriends. Besides, in a June 2012 interview, she revealed she had briefly married a French photographer for complicated reasons.

On September 19, 2012, Apple was arrested and was charged with possession of hashish, and was detained at the Hudspeth Country Jail.

What is the Net Worth of Fiona Apple?

The 42 years old Fiona Apple has quite a great earnings from her professional career as a signer. Working in this field for more than 2 decades, she has managed to amass a million worth fortune from her several albums and tours. Her estimated net worth is around $18 million.

How Tall is Fiona Apple?

Fiona Apple is a gorgeous lady in her 40s. Apple has a well maintained slim body physique of 34-24-32 inches. She stands tall with a height of 5ft. 2inch.(1.57 m) while her body weighs around 55kg. She has a fair complexion with light brown hair and blue eyes.

Our contents are created by fans, if you have any problems of Fiona Apple Net Worth, Salary, Relationship Status, Married Date, Age, Height, Ethnicity, Nationality, Weight, mail us at [email protected]