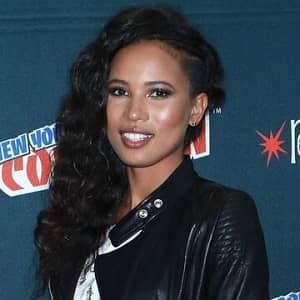 Fola Evans-Akingbola is a British actress and model. She is well recognized by her fans for her portrayal of Maddie Bishop in the Freeform series Siren.

When was Fola Evans-Akingbola born?

Fola was born to her parents Gillian Evans (mother) and Sola Akingbola (father). Her English mother is an anthropologist and her Nigerian father is a musician. She was born and raised in London alongside her sister, whose name has not yet been revealed.

Talking about her education, Fola graduated with a major in philosophy. Later though, she wanted to pursue acting and so, she joined the National Youth Theater of Great Britain. After training there, Fola also joined the Identity Drama School in London.

How did Fola Evans-Akingbola build her career?

Initially in her career, Fola worked as a model. She would later leave this profession when her acting career started to take off. Fola first appeared onscreen in the series Youngers and Holby City. After a few more roles, her career finally gained some traction after she was cast on Game of Thrones. Although her role was minor, she displayed her talents brilliantly and even got the chance to work alongside talented actors such as Jason Momoa and Emilia Clarke.

Fola’s breakthrough role came in the form of Madelyn Bishop, a major character in the TV series Siren. She has gained massive popularity after this portrayal and rightly so. Her performance is stunning and really shows that she is a very capable actress. Thanks to the boost in her popularity through Siren, Fola was able to get a role in a 2019 episode of the popular series Black Mirror.

She has even worked as a voice actor in Ubisoft’s Assassin’s Creed: Origins. Her career has seen explosive growth in the last few years and she is loved by her massive fanbase. As such, we wouldn’t be too surprised if her career goes up to new heights in the coming years.

What is Fola Evans-Akingbola’s net worth?

As of 2020, Fola Evans-Akingbola has an estimated net worth of approximately 1.2 million U.S. dollars. She has not revealed her annual salary as of yet.

What are Fola Evans-Akingbola’s physical statistics?

Fola stands at a height of 5 feet 8 inches and weighs roughly 58 kilograms. Along with her good looks, she has a slim and fit physique with the body measurements of 34-24-35 inches. Both her hair and eyes are dark brown in color.

Who is Fola Evans-Akingbola dating?

As of now, Fola Evans-Akingbola is single and doesn’t have a boyfriend. She prefers to keep her personal life private, and as such, she hasn’t revealed her dating history as well. Fola’s onscreen character is a lesbian on Siren and this, coupled with the fact that no details on her love life are available, has led to many rumors saying that she is a lesbian. But none of this has been confirmed and they are just rumors for now.

Fola is not active on any social media platform at the moment. She used to post on Instagram but lately, the account seems to have been deactivated. So, unfortunately, we will have to wait for her to create an account for updates on her private and professional life.

Our contents are created by fans, if you have any problems of Fola Evans-Akingbola Net Worth, Salary, Relationship Status, Married Date, Age, Height, Ethnicity, Nationality, Weight, mail us at [email protected]