Francis Ngannou is a Cameroonian-French professional mixed martial artist competing in the Heavyweight division of the Ultimate Fighting Championship. 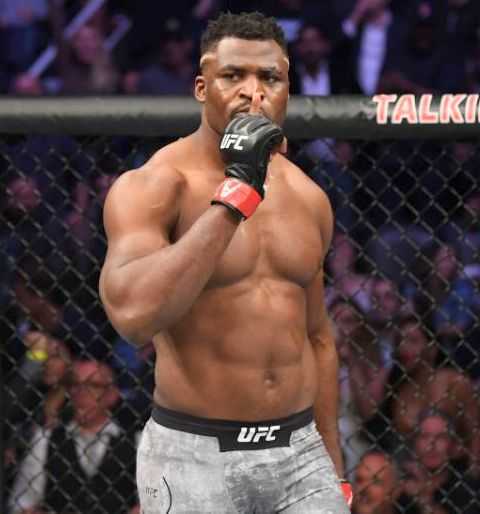 The one who intimidates me is myself. I'm scared to fail. That is the thing that makes me the most afraid, to fail. Just to think that I can do a mistake and lose the fight scares me, so that is why I work out a lot: to bring more chance to my size and less chance to my opponent

I've been in this sport only four years, and I know that I'll keep learning and improving.

Francis Ngannou is a famous Cameroonian professional MMA fighter who currently competes in the Heavyweight division of the Ultimate Fighting Championship(UFC). He also holds the record for the highest punching power ever measured by UFC. He is also known as the Predator.

What is Francis Ngannou famous for?

When was Francis Ngannou born?

Francis Ngannou was born on 5th September 1986 in Batie, Cameroon. His birth name is Francis Ngannou. Cameroonian is his nationality. His ethnicity is Bakossi. Virgo is his zodiac sign.

He was born to a poor family in the village of Batie. His father was a street fighter and the villagers had negative behavior towards his father due to his profession so, Francis wanted to do something positive and pursue a boxing career since his childhood. He has no siblings.

He was raised in his hometown, Batie. He spent his childhood in poverty. Due to his poverty, he could not get an education. At the age of 12, he began working in a sand quarry in his village to get some food.

His inspiration to be a boxer was his father and Mike Tyson. He started learning boxing at the age of 22 but he left the training after one year due to his illness. Then, he also did the job of a waiter.

Later in 2013, he emigrated to Paris, France to pursue his career as a boxer. He started learning boxing from Didier Carmont.

His coach, Carmont also introduced him to the MMA. Then, he started his MMA career in November 2013 fighting in 100% Fight.

How is Francis Ngannou’s career?

Who is Francis Ngannou married to?

He has also founded the Francis Ngannou Foundation which runs the first combat sports gym in Cameroon.

What is the net worth of Francis Ngannou?

Recently, in June, he earned $215k USD after winning a match. His net worth also includes bonuses from UFC.

How tall is Francis Ngannou?

He has a dark complexion with black hair and dark brown eyes.

Our contents are created by fans, if you have any problems of Francis Ngannou Net Worth, Salary, Relationship Status, Married Date, Age, Height, Ethnicity, Nationality, Weight, mail us at [email protected]